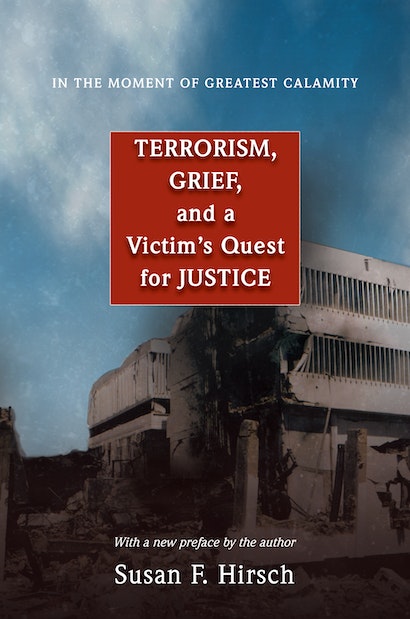 On August 7, 1998, bombs exploded at two United States embassies in East Africa. American anthropologist Susan Hirsch and her husband Jamal, a Kenyan, were among the thousands of victims, and Jamal died. From there, Hirsch went on to face devastating grief with the help of friends and families on two continents, observing the mourning rituals of her husband’s community to honor him. When the alleged bombers were captured and sent to New York to stand trial, she witnessed firsthand the attempts of America’s criminal justice system to handle terrorism through the law.

In the Moment of Greatest Calamity is her story — a tale told on many levels: personal, anthropological, legal, and, finally, political. The book’s central chapters describe Hirsch’s experience of the bombing trials in a Manhattan federal court in 2001, including a behind-the-scenes look at the investigation leading up to the trial, encounters with some of the FBI’s leading terrorism investigators, and many moments of drama from the proceedings themselves. Hirsch reveals the inner conflict that results from her opposition to the death penalty and concludes that the trial was both flawed and indispensable.

Hirsch’s story of this tragedy and its legal aftermath comes to life through — and is enhanced by — her skills as a social scientist. Her unique viewpoint makes it unlike any other story about terrorism.

Susan F. Hirsch is associate professor at the Institute for Conflict Analysis and Resolution at George Mason University. She is the author of Pronouncing and Persevering and the coeditor of Contested States.

"Susan Hirsch has turned [her] experience into a powerful book, one fully engaged with her experience of grief and loss but equally so with analysis of these questions of justice, and with how the pursuit of justice interacted with her status as a victim, a survivor, a widow, an anthropologist."—Daily Kos

"In the Moment of Greatest Calamity stands as by far the most thorough examination of the embassy bombings and the subsequent trial of four of the perpetrators. An American anthropologist with long personal and professional involvement in Kenya and Tanzania, Hirsch is uniquely equipped to bridge the divide separating her American readers from her East African subject matter."—Kevin J. Kelley, East African

"In the Moment of Greatest Calamity is a profoundly moving and illuminating testament to a victim's need for understanding and justice-not vengeance or retaliation-in the wake of a devastating terrorist attack. With extraordinary wisdom and insight, Hirsch makes a compelling case that, whether the victim of terrorism is, like herself, an individual whose spouse has been killed, or, like the post-September 11th United States, a country that has been attacked, healing will not be brought about by a unilateral lashing out at a poorly understood enemy, but, rather, only by a patient, thoughtful, and judicious response that does not compromise our humanity or lose sight of our respect for life."—Susan J. Brison, author of Aftermath: Violence and the Remaking of a Self

"Susan Hirsch has written a marvelous book that is compelling, moving, and yet always rigorous. In the Moment of Greatest Calamity is a rare combination of autobiography and first-rate ethnography. Hirsch skillfully draws her readers close to her pain and yet manages to provide a new way of seeing the possibilities and problems of taking on the identity of the victim. Her book tells a powerful story of the limits of law in the face of unimaginable personal tragedy. I know of nothing quite like it."—Austin Sarat, Amherst College, author of Mercy on Trial: What It Means to Stop an Execution

"Incredibly rich, this book is many different things at the same time. It is beautiful, chilling, sad, disturbing, and intensely moving. I found it hard to put down. The text is beautifully written. Hirsch's legal analysis—indeed, the book as a whole-is insightful and original."—Susan Coutin, University of California, Irvine, author of Legalizing Moves: Salvadoran Immigrants' Struggle for U.S. Residency

"This is an enthralling read, even as it is an appalling tale. I found myself utterly riveted. While conveying her story in a fashion that recalls fine documentary filmmaking or investigative journalism, Hirsch never loses the voice or stance of the social scientist. She gives us a very anthropological account of the process of grief and mourning."—Lawrence Rosen, Princeton University, author of The Culture of Islam: Changing Aspects of Contemporary Muslim Life