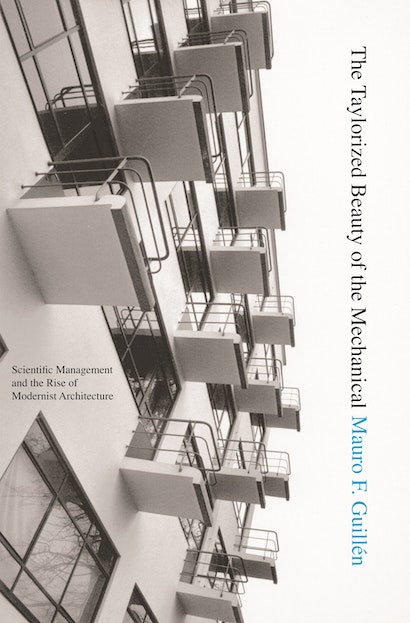 The dream of scientific management was a rationalized machine world where life would approach the perfection of an assembly line. But since its early twentieth-century peak this dream has come to seem a dehumanizing nightmare. Henry Ford’s assembly lines turned out a quarter of a million cars in 1914, but all of them were black. Forgotten has been the unparalleled new aesthetic beauty once seen in the ideas of Ford and scientific management pioneer Frederick Winslow Taylor. In The Taylorized Beauty of the Mechanical, Mauro Guillén recovers this history and retells the story of the emergence of modernist architecture as a romance with the ideas of scientific management — one that permanently reshaped the profession of architecture.


Modernist architecture’s pioneers, Guillén shows, found in scientific management the promise of a new, functional, machine-like — and beautiful — architecture, and the prospect of a new role for the architect as technical professional and social reformer. Taylor and Ford had a signal influence on Bauhaus founder Walter Gropius and on Le Corbusier and his Towards a New Architecture, the most important manifesto of modernist architecture. Architects were so enamored with the ideas of scientific management that they adopted them even when there was no functional advantage to do so.


Not a traditional architectural history but rather a sociological study of the profession of architecture during its early modernist period, The Taylorized Beauty of the Mechanical provides a new understanding of the degree to which modernist architecture emerged from a tradition of engineering and industrial management.

Mauro F. Guillén is director of the Lauder Institute and the Dr. Felix Zandman Professor of International Management and Sociology at the Wharton School of the University of Pennsylvania. He is the author of TThe Limits of Convergence: Globalization and Organizational Change in Argentina, South Korea, and Spain (Princeton), The Rise of Spanish Multinationals, and the coauthor of Building a Global Bank (Princeton).

"The Taylorized Beauty of the Mechanical is an ambitious work. Mauro Guillen draws from an abundance of sources, both contemporary and recent, to support his hypothesis that there was a connection between the rise of scientific management and the development of modernist architecture.... Guillen has written an excellent comparative study that will appeal both to business historians and to architectural and design historians."—Per H. Hansen, Business History Review

"Guillén . . . offers a unique and bold explanation of the differential development of modern architecture internationally. . . . Guillén's analysis of modern architecture is impressive and inventive. If his answers are not definitive, he certainly asks the right questions and, consequently, greatly advances the sociological study of architecture."—David Gartman, American Journal of Sociology

"Mauro F. Guillén contributes to the scholarship on architectural Modernism with an interesting twist with approaching the architectural history literature from a joint managerial and sociological viewpoint. . . . [T]his survey will be of interest to specialists and non-specialists alike."—Guillaume Evrard, European Legacy

"Deeply historical and comparative, Mauro Guillén shows how a neo-institutionalist and social movement analysis complement each other as he explains the emergence and rise to prominence of modernist architecture. Systematic in its use of data, the book is nuanced in its analysis. He examines the several strains of modernism and subtly explains why modernism takes hold in some countries, but not others. An excellent analysis of aesthetics and the transformation of the profession of architecture."—Mayer Zald, University of Michigan

"When Frederick Winslow Taylor was hectoring the workers of the Bethlehem Iron Works to greater productivity, who would have guessed that this stolid, obsessive Philadelphian would inspire visionary aesthetic movements across the European continent? Mauro Guillén interrogates the surprising affinity between scientific management and architectural modernism until it yields both engrossing narrative and analytic insight. Combining the skills of the comparative historian with those of the detective, he follows his quarry around the globe, demonstrating the consistent connection between Taylorism and modernist architecture. In so doing he has produced what will be at once an important contribution to the history of architecture and a landmark study in the sociology of culture."—Paul DiMaggio, Princeton University

"Conventional wisdom is that scientific management's effects have been largely negative in moral and aesthetic terms. Guillén proposes that it has given rise to a distinctive artistic form associated with a new moral ethic and sensibility. The attempt to link theories of organizing and artistic styles is novel and should be of interest to students of culture and society generally."—W. Richard Scott, Professor Emeritus of Sociology, Stanford University

"Guillén documents with a profusion of information the influence of scientific management on the architects who played an important part in the emergence of modern architecture. He has mustered an impressive array of sources, including many primary sources on Latin American architecture that are almost never considered in the canonical literature."—Magali Sarfatti Larson, Professor of Sociology, Temple University