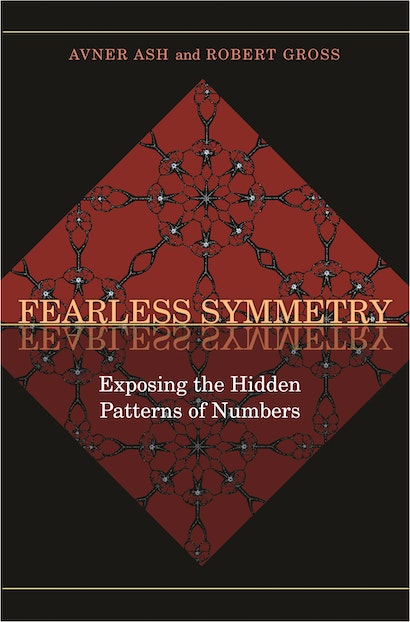 Mathematicians solve equations, or try to. But sometimes the solutions are not as interesting as the beautiful symmetric patterns that lead to them. Written in a friendly style for a general audience, Fearless Symmetry is the first popular math book to discuss these elegant and mysterious patterns and the ingenious techniques mathematicians use to uncover them.


Hidden symmetries were first discovered nearly two hundred years ago by French mathematician évariste Galois. They have been used extensively in the oldest and largest branch of mathematics — number theory — for such diverse applications as acoustics, radar, and codes and ciphers. They have also been employed in the study of Fibonacci numbers and to attack well-known problems such as Fermat’s Last Theorem, Pythagorean Triples, and the ever-elusive Riemann Hypothesis. Mathematicians are still devising techniques for teasing out these mysterious patterns, and their uses are limited only by the imagination.


The first popular book to address representation theory and reciprocity laws, Fearless Symmetry focuses on how mathematicians solve equations and prove theorems. It discusses rules of math and why they are just as important as those in any games one might play. The book starts with basic properties of integers and permutations and reaches current research in number theory. Along the way, it takes delightful historical and philosophical digressions. Required reading for all math buffs, the book will appeal to anyone curious about popular mathematics and its myriad contributions to everyday life.

"The authors are to be admired for taking a very difficult topic and making it . . . more accessible than it was before."—Timothy Gowers, Nature

"The authors . . . outline current research in mathematics and tell why it should hold interest even for people outside scientific and technological fields."—Science News

"The book . . . does a remarkable job in making the work it describes accessible to an audience without technical training in mathematics, while at the same time remaining faithful to the richness and power of this work. I recommend it to mathematicians and nonmathematicians alike with any interest in this subject."—William M. McGovern, SIAM Review

"Unique. . . . [T]his book is an amazing attempt to provide to a mathematically unsophisticated reader a realistic impression of the immense vitality of this area of mathematics."—Lindsay N. Childs, Mathematical Reviews

"To borrow one of the authors' favorite words, this book is an amazing attempt to provide to a mathematically unsophisticated reader a realistic impression of the immense vitality of this area of mathematics. But I think the book has another useful role. With a very broad brush, it paints a beautiful picture of one of the main themes of the Langlands program."—Lindsay N. Childs, MathSciNet

"All too often, abstract mathematics, one of the most beautiful of human intellectual creations, is ground into the dry dust of drills and proofs. Useful, yes; exciting, no. Avner Ash and Robert Gross have done something different—by focusing on the ideas that modern mathematicians actually care about. Fearless Symmetry is a book about detecting hidden patterns, about finding definitions that clarify, about the study of numbers that has entranced some of our great thinkers for thousands of years. It is a book that takes on number theory in a way that a nonmathematician can follow-systematically but without a barrage of technicalities. Ash and Gross are two terrific guides who take the reader, scientist or layman, on a wonderful hike through concepts that matter, culminating in the extraordinary peaks that surround the irresistible, beckoning claim of Fermat's Last Theorem."—Peter Galison, Harvard University