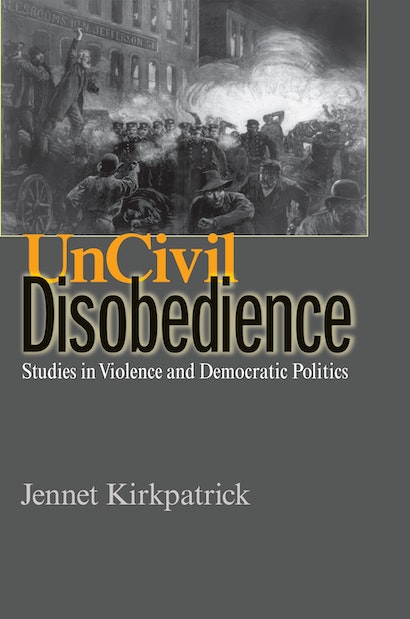 Uncivil Disobedience examines the roles violence and terrorism have played in the exercise of democratic ideals in America. Jennet Kirkpatrick explores how crowds, rallying behind the principle of popular sovereignty and desiring to make law conform to justice, can disdain law and engage in violence. She exposes the hazards of democracy that arise when citizens seek to control government directly, and demonstrates the importance of laws and institutions as limitations on the will of the people.


Kirkpatrick looks at some of the most explosive instances of uncivil disobedience in American history: the contemporary militia movement, Southern lynch mobs, frontier vigilantism, and militant abolitionism. She argues that the groups behind these violent episodes are often motivated by admirable democratic ideas of popular power and autonomy. Kirkpatrick shows how, in this respect, they are not so unlike the much-admired adherents of nonviolent civil disobedience, yet she reveals how those who engage in violent disobedience use these admirable democratic principles as a justification for terrorism and killing. She uses a “bottom-up” analysis of events to explain how this transformation takes place, paying close attention to what members of these groups do and how they think about the relationship between citizens and the law.

Uncivil Disobedience calls for a new vision of liberal democracy where the rule of the people and the rule of law are recognized as fundamental ideals, and where neither is triumphant or transcendent.

Jennet Kirkpatrick is lecturer in political science at the University of Michigan.

"Kirkpatrick's study is rich in history and suggestive in its pursuit of other models for thinking about law's social meanings. . . . Kirkpatrick's book is worth reading and pondering for the ways that it makes one connect American legal history to these pressing issues."—Jon Goldberg-Hiller, Law and Politics Book Review

"The book features adept forays into jurisprudence at the same time that it captures the cultural diversity and local character of political violence in the US. Here the challenges posed by Thoreau and Rosa Parks become a platform from which to jump into the bloody world of John Brown and Timothy McVeigh. Kirkpatrick warns that conventional treatment of violence as outside of law is a sort of denial that leaves us vulnerable."—J. Brigham, Choice

"[O]ne of the great strengths of this book is its ability to relate illuminating historical examples of uncivil and civil disobedience to a wider tradition of political and legal theory. . . .This is an original, highly readable, and rewarding book."—April Carter, Perspectives on Politics

"This well-written book not only provides significant insights into the motives of southern lynch mobs and others but also raises necessary and troubling questions about the nature of democracy in America. It is an important work that should be widely read."—Brent J. Aucoin, Journal of Southern History

"This fine study explores the compatibilities and tensions between rule by the people and the rule of law. Grounded in history, it offers a rich and articulate analysis of actual violent conflicts. Informed by political theory, it provides a sophisticated and timely reflection on manifestations of conflicts of values in American democracy and their implications for liberal justice and politics."—Marianne Constable, University of California, Berkeley

"Jennet Kirkpatrick has done something quite remarkable in this book. She has taken a set of unsavory characters—vigilantes, members of lynch mobs, and far-right militiamen—studied their arguments, and placed them within the tradition of political theory. She demonstrates that understanding is the necessary prelude to criticism. And she adds militant abolitionists to the mix so that we can't resist the demonstration. The result is a wonderfully illuminating argument."—Michael Walzer, professor emeritus, Institute for Advanced Study

"Kirkpatrick has written a wonderful book—thoughtful, provocative, elegant, and unexpected. She begins with a jolting historical point: the United States has a long history of domestic terrorists. These are not revolutionaries seeking to overthrow the American regime but rather men and women pursuing democratic ideals and, as they see it, the promises made by the Constitution itself. This is an important book."—James A. Morone, author of Hellfire Nation: The Politics of Sin in American History

"Kirkpatrick presents a clear and important argument, namely that the wish for an immediate and coherent connection between the moral values or will of any group and what the law says or does is dangerous and ultimately incompatible with democratic politics. Uncivil Disobedience is an intriguing study of the origins and philosophies of violent citizen action groups in the United States."—Austin Sarat, Amherst College

"An outstanding piece of scholarship. Kirkpatrick refers to the 'dangerous potential of democratic ideas.' This is a very apt phrase, and it is an expression of what she explores in this very original and thought-provoking book. Kirkpatrick is not at all hostile to American democracy, but she is very alert to its pitfalls. She is a social scientist in the best sense of the term."—Richard Maxwell Brown, University of Oregon