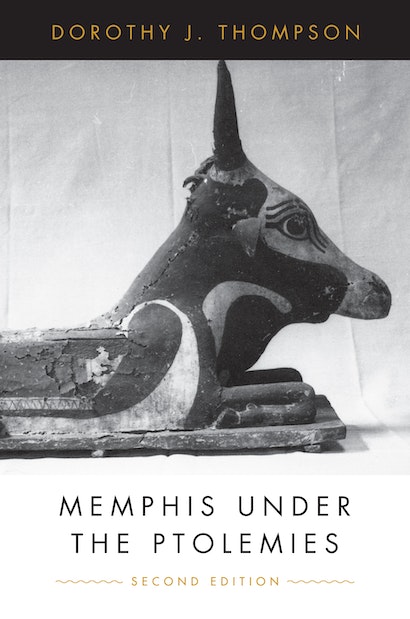 Drawing on archaeological findings and an unusual combination of Greek and Egyptian evidence, Dorothy Thompson examines the economic life and multicultural society of the ancient Egyptian city of Memphis in the era between Alexander and Augustus. Now thoroughly revised and updated, this masterful account is essential reading for anyone interested in ancient Egypt or the Hellenistic world.

The relationship of the native population with the Greek-speaking immigrants is illustrated in Thompson’s analysis of the position of Memphite priests within the Ptolemaic state. Egyptians continued to control mummification and the cult of the dead; the undertakers of the Memphite necropolis were barely touched by things Greek. The cult of the living Apis bull also remained primarily Egyptian; yet on death the bull, deified as Osorapis, became Sarapis for the Greeks. Within this god’s sacred enclosure, the Sarapieion, is found a strange amalgam of Greek and Egyptian cultures.

"This thoroughly revised edition of a masterpiece of historical writing examines with precision and verve the ancient Egyptian city of Memphis in the period between Alexander and Augustus. . . . She is especially sensitive to the syncretic, sometimes cacophonous, metropolitan life produced by a population drawn from throughout the Mediterranean basin, and by the confrontation of classical civilization itself on the verge of cultural upheaval, as Roman power gradually eclipsed Greek prestige and influence—with a civilization that reached back millennia. The result is a meticulous, vivid portrait of a profoundly foreign world."—The Atlantic

"[A] masterful analysis of the surviving evidence for ancient Memphis."—John F. Oates, American Journal of Philology

"[T]his book greatly enhances understanding of Egyptian history in the Ptolemaic period and the author is to be congratulated on her skill in welding the disparate sources into such an attractive whole."—Amélie Kuhrt, History

"[A] book of utmost importance to all readers interested in ancient civilizations. . . . Thompson's concentration on the Hellenistic period provides a penetrating study of all aspects of this city from the time of Alexander to Augustus."—C. C. Lamberg-Karlovsky, Choice

"This, in so many ways, is a book aimed at students and for that target audience is successful, and would make a sensible purchase."—Kate Phizackerley, Egyptological.com

"Scott Soames' new book, What Is Meaning?, is an important book, both in the issues it raises and in its shortcomings. It is the first serious discussion of meaning (not 'semantic content' or some other term designed to sidestep the real issue) by a leading analytic philosopher of language in a long while, and its findings lead to a more realistic understanding of meaning and language."—Sergeiy Sandler, European Legacy

"The text of the book is closely packed and authoritative in its presentation of the facts. Whilst this is not an 'easy read' the text is surprisingly readable and engaging. Indeed there is so much to be learned from these pages that one wants to turn the page and read on, and once a chapter is started it is difficult to put the book down. . . . In short a masterful piece of scholarship looking at a complex and often overlooked period of Egyptian history. A book that any serious student of the Ptolemaic Period, or the Hellenistic world, would greatly benefit from reading."—Victor Blunden, Ancient Egypt

"Princeton University Press has done students of Ptolemaic Egypt a great service by publishing a second edition of this rich and important book."—Andrew Erskine, European Legacy

"This thoroughly revised and updated account presents a clear picture of one of the most important cities of Ptolemaic Egypt, but it also takes the reader deep into the world of Egyptian temples, the priests who served the various cults, and the religious, economic, and social practices of the diverse communities who lived in and around Memphis. Memphis Under the Ptolemies is one of the greatest studies of an ancient city and a true testament to one of the finest scholars of the Hellenistic world."—J. G. Manning, Yale University