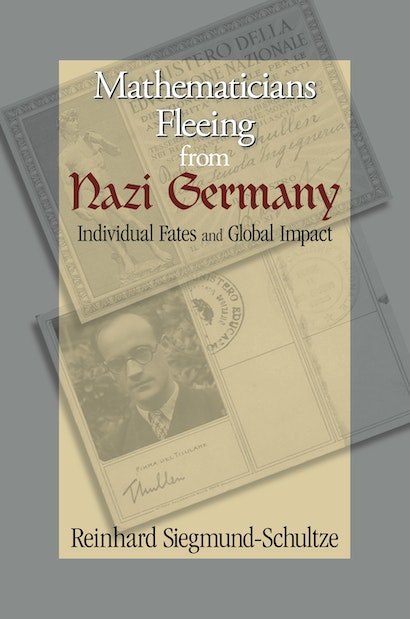 The emigration of mathematicians from Europe during the Nazi era signaled an irrevocable and important historical shift for the international mathematics world. Mathematicians Fleeing from Nazi Germany is the first thoroughly documented account of this exodus. In this greatly expanded translation of the 1998 German edition, Reinhard Siegmund-Schultze describes the flight of more than 140 mathematicians, their reasons for leaving, the political and economic issues involved, the reception of these emigrants by various countries, and the emigrants’ continuing contributions to mathematics. The influx of these brilliant thinkers to other nations profoundly reconfigured the mathematics world and vaulted the United States into a new leadership role in mathematics research.


Based on archival sources that have never been examined before, the book discusses the preeminent emigrant mathematicians of the period, including Emmy Noether, John von Neumann, Hermann Weyl, and many others. The author explores the mechanisms of the expulsion of mathematicians from Germany, the emigrants’ acculturation to their new host countries, and the fates of those mathematicians forced to stay behind. The book reveals the alienation and solidarity of the emigrants, and investigates the global development of mathematics as a consequence of their radical migration.


An in-depth yet accessible look at mathematics both as a scientific enterprise and human endeavor, Mathematicians Fleeing from Nazi Germany provides a vivid picture of a critical chapter in the history of international science.

Reinhard Siegmund-Schultze is professor of the history of mathematics at the University of Agder, Kristiansand, in Norway.

"An in-depth yet accessible look at mathematics both as a scientific enterprise and human endeavour, Mathematicians Fleeing from Nazi Germany provides a vivid picture of a critical chapter in the history of international science."—L'Enseignement Mathematique

"Siegmund-Schultze has a profound and deep understanding of the culture of mathematics and mathematicians. His book conveys very well how complicated and subtle the process of emigration was . . . and how much the émigré's themselves had to overcome."—Mark Walker, Metascience

"The book is heavily based on primary archival sources that have not been analyzed before. Many people will profit from its illuminating discussions of the material."—Leo Corry, Tel Aviv University

"This is an excellent book."—Karen Parshall, University of Virginia