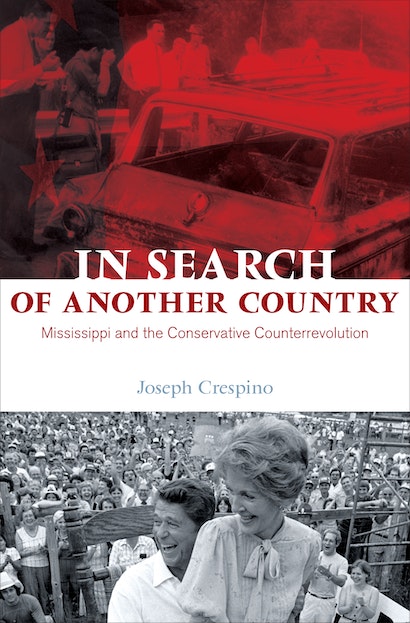 In the 1960s, Mississippi was the heart of white southern resistance to the civil-rights movement. To many, it was a backward-looking society of racist authoritarianism and violence that was sorely out of step with modern liberal America. White Mississippians, however, had a different vision of themselves and their country, one so persuasive that by 1980 they had become important players in Ronald Reagan’s newly ascendant Republican Party.

In this ambitious reassessment of racial politics in the deep South, Joseph Crespino reveals how Mississippi leaders strategically accommodated themselves to the demands of civil-rights activists and the federal government seeking to end Jim Crow, and in so doing contributed to a vibrant conservative countermovement. Crespino explains how white Mississippians linked their fight to preserve Jim Crow with other conservative causes — with evangelical Christians worried about liberalism infecting their churches, with cold warriors concerned about the Communist threat, and with parents worried about where and with whom their children were schooled. Crespino reveals important divisions among Mississippi whites, offering the most nuanced portrayal yet of how conservative southerners bridged the gap between the politics of Jim Crow and that of the modern Republican South.

This book lends new insight into how white Mississippians gave rise to a broad, popular reaction against modern liberalism that recast American politics in the closing decades of the twentieth century.

Joseph Crespino is Assistant Professor of History at Emory University.

"In his study of Mississippi, Crespino provides a challenging, comprehensive examination of white southerners confronting the modern Civil Rights Movement. While focusing on the actions, strategies, and beliefs from the Brown v. Board of Education decision to the rise of Ronald Reagan in 1980, Crespino successfully reevaluates the perspective of southern whites beyond the Ku Klux Klan and those espousing virulent racism."—J. Michael Bitzer, Choice

"In this important and engagingly written book historian Joseph Crespino has examined Mississippi's white population and has discovered more complexity, and much more change over time, than Phil Ochs [in his biting anthem, 'Here's to the State of Mississippi'] would have thought possible."—Bruce Nelson, Journal of Southern History

"Elucidating the connection between modern conservatives who avow racial equality and the southern segregationists who so strongly resisted it, . . . Crespino counters the facile historical claims of conservatives who identify their movement with the religious, nonviolent, and integrationist civil rights crusades of the 1950s and early 1960s."—Paul V. Murphy, American Historical Review

"Crespino navigates . . . with consummate skill, offering clear understandings of state and national politics and basing his linkages of the two fields on solid evidence. . . . In Search of Another Country is a stellar work of historical scholarship, powerfully researched, organized, and argued."—Peter N. Stearns, Journal of Social History

"In Search of Another Country is an excellent addition to the growing literature on the Republican counterrevolution in the American South. It is well researched and deftly argued. Although the layman might not appreciate its careful attention to detail, the specialist will. Indeed, it is a book that deserves a place on the shelf of every research library."—Barton C. Shaw, Journal of American Studies

In Search of Another Country represents a major advance in our understanding of the conservative counterrevolution that remade the American political landscape after the sixties. This book is the best retort to those who still see the civil rights movement in triumphalist terms. Elegantly written and meticulously researched, it could only have been written by someone with enormous respect for the complexity of the people of Mississippi, irrespective of where they stood in the fray."—Charles Payne, Duke University

"In this bold and thoughtful study, Joseph Crespino explains how the race-based Republican 'southern strategy' became part of a broader, truly 'American' appeal that swept across the nation in the aftermath of the civil rights movement."—James C. Cobb, author of Away Down South: A History of Southern Identity

"This is the most thoroughly researched and incisively interpreted account of one of the most complex social and political transitions ever to take place in any American state. No one is better equipped to write this book than this brilliant young historian, who out of his own personal observations growing up in Mississippi has captured with remarkable intuition and understanding the nuances of life in his native state. This is a must-read for anyone seeking a clearer understanding of the bitter struggles of the civil-rights movement and the political evolution that has followed."—William Winter, former Governor of Mississippi

"Crespino's study of the transformation of white Mississippi politics will instantly become the standard work in southern history and American political history in the late twentieth century because it does what many prominent southern historians have been calling for: it takes white opposition to the civil-rights movement seriously. Rather than viewing white Mississippians as an undifferentiated mass, Crespino shows divisions among segregationists based around competing strategies for preserving the racial order. For political historians who have sought to understand the rise of conservative Republicanism in the South, this book provides a thoroughly researched exploration of how the civil-rights struggle led whites to develop a nonracist discourse that sought to salvage what they could of white supremacy."—Daryl Michael Scott, Howard University

"Joe Crespino's marvelous book asks how white southerners responded to the moral and political challenges of the civil-rights movement. It traces the successful accommodation conservative white Mississippians made to the new world precipitated by the campaign for black civil rights, and then shows how that accommodation affected conservative politics in the region and in the nation. Crespino helps define a recent arc of scholarship dedicated to understanding, and not simply vilifying, civil-rights opponents. This is an important book and Mississippi is the right place to anchor this story."—Jane Dailey, coeditor of Jumpin' Jim Crow: Southern Politics from Civil War to Civil Rights