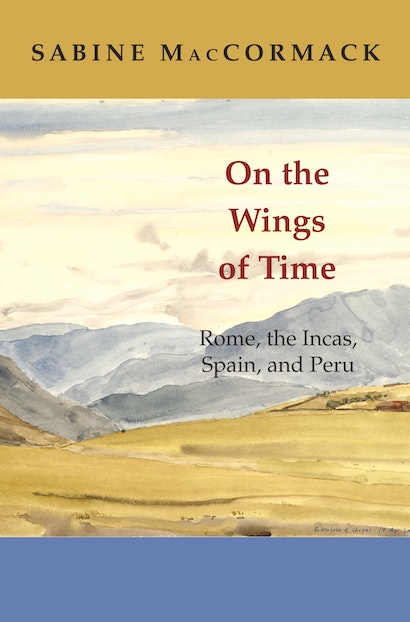 Historians have long recognized that the classical heritage of ancient Rome contributed to the development of a vibrant society in Spanish South America, but was the impact a one-way street? Although the Spanish destruction of the Incan empire changed the Andes forever, the civil society that did emerge was not the result of Andeans and Creoles passively absorbing the wisdom of ancient Rome. Rather, Sabine MacCormack proposes that civil society was born of the intellectual endeavors that commenced with the invasion itself, as the invaders sought to understand an array of cultures. Looking at the sixteenth- and seventeenth-century people who wrote about the Andean region that became Peru, MacCormack reveals how the lens of Rome had a profound influence on Spanish understanding of the Incan empire.

Tracing the varied events that shaped Peru as a country, MacCormack shows how Roman and classical literature provided a framework for the construal of historical experience. She turns to issues vital to Latin American history, such as the role of language in conquest, the interpretation of civil war, and the founding of cities, to paint a dynamic picture of the genesis of renewed political life in the Andean region. Examining how missionaries, soldiers, native lords, and other writers employed classical concepts to forge new understandings of Peruvian society and history, the book offers a complete reassessment of the ways in which colonial Peru made the classical heritage uniquely its own.

Sabine MacCormack is Theodore Hesburgh Professor of Arts and Letters at the University of Notre Dame. Her books include Religion in the Andes: Vision and Imagination in Early Colonial Peru (Princeton).

"An extraordinarily erudite and richly documented—dare I say brilliant—discussion of the various ways in which the world of antiquity, especially that of Rome in particular, colored the manner in which Spanish and Creole chroniclers viewed not only the history of Incas, but also, starting in the seventeenth century, that of the whole of Peru."—Richard L. Kagan, International History Review

"Historian MacCormack offers a fresh examination of Spanish understanding of culture and history in the lands that became Peru. . . . This clearly written, thoughtful, and perceptive volume is based on outstanding research in printed primary and secondary materials in Latin, Spanish, French, Italian, and English."—Choice

"[E]legantly written and erudite . . . . This book fits into an ever-expanding historiography on and re-evaluation of the chronicles. Its most significant contribution is MacCormack's encapsulating analyses of their authors. . . . MacCormack's book places her capable analyses at the service of her colleagues and our students."—Susan Elizabeth Ramirez, American Historical Review

"MacCormack provides a stunning and imaginative reconstruction of the way in which sixteenth- and seventeenth-century Spanish and Peruvian historians perceived the history of the Inca world."—James Muldoon, Journal of Interdisciplinary History

"On the Wings of Time: Rome, the Incas, Spain, and Peru . . . is deeply learned and persuasive, a model of how to write the intellectual history of empires and imperialism. . . . MacCormack has contributed greatly to the intellectual history of early modern Spain and Spanish America. More than this, she has offered a model of how such investigations might proceed elsewhere on the edges of European empires."—Caroline Winterer, Hispanic American History Review

"This masterful and passionate book offers an interesting picture of the Latin American society of the sixteenth century. It challenges the paradigm of the Spanish ruling in Latin America as completely negative and dark-sided. The book reconstructs the classical roots of a period that is perhaps not very familiar to a classical audience and, conversely, shows how deeply indebted to Greco-Roman culture were the new realities of a modern empire, and how this ancient civilization and its canonical authors were read and perceived. Many fine illustrations (some by the author herself) provide a helpful corollary to the written text."—Chiara O. Tommasi Moreschini, Bryn Mawr Classical Review

"[T]his book sheds a welcome light on a large number of other, maybe equally important issues connected with the impact of Roman traditions on the emergence of a distinct Peruvian polity, and it displays an impressive wealth of philological and historical erudition."—Benjamin Straumann, International Journal of the Classical Tradition

"It is impossible in such a short space to do justice to the sheer range of these exceptionally learned chapters. MacCormack's splendid scholarship makes the Roman past come to life in the world of the Incas, showing convincingly how it was claimed on behalf 'of Inca past and Spanish present.'"—Fernando Cervantes, European History Quarterly

"This remarkable intellectual history will fascinate scholars of classical literature, students of colonial Spanish America, and historians of empire alike. Let us now hope that scholars use MacCormack's intellectual history as a model and inspiration for similar inquiries into the early colonial periods of Mexico, British America, or New France."—Michael David Snodgrass, European Legacy

"I highly recommend this book. This is an important contribution for the field of Atlantic history not only for illuminating new perspectives on empire but also for showing that intellectual history in the early modern period must not be constrained by European geographic parameters."—Marcy Norton, H-Net Reviews

"On the Wings of Time is a delight to read. MacCormack's meditations are those of a master scholar and storyteller; this is a very significant and novel contribution to our understanding of South American history."—Sabine Hyland, Saint Norbert College

"This book is pathbreaking in its approach to the historiography of the Spanish colonial world. MacCormack has exquisite control of the relevant sources, and weaves them together in a masterful and original way."—Bruce Mannheim, University of Michigan