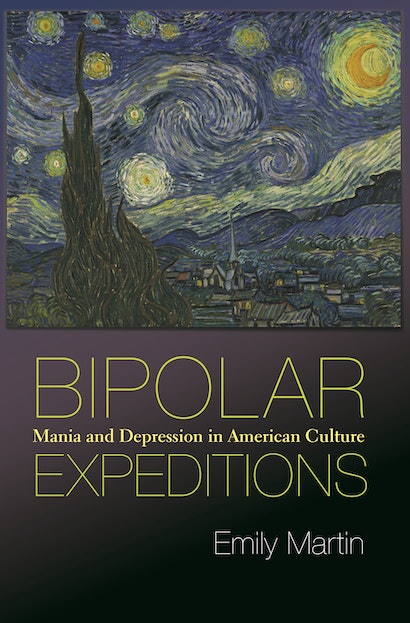 Manic behavior holds an undeniable fascination in American culture today. It fuels the plots of best-selling novels and the imagery of MTV videos, is acknowledged as the driving force for successful entrepreneurs like Ted Turner, and is celebrated as the source of the creativity of artists like Vincent Van Gogh and movie stars like Robin Williams. Bipolar Expeditions seeks to understand mania’s appeal and how it weighs on the lives of Americans diagnosed with manic depression.


Anthropologist Emily Martin guides us into the fascinating and sometimes disturbing worlds of mental-health support groups, mood charts, psychiatric rounds, the pharmaceutical industry, and psychotropic drugs. Charting how these worlds intersect with the wider popular culture, she reveals how people living under the description of bipolar disorder are often denied the status of being fully human, even while contemporary America exhibits a powerful affinity for manic behavior. Mania, Martin shows, has come to be regarded as a distant frontier that invites exploration because it seems to offer fame and profits to pioneers, while depression is imagined as something that should be eliminated altogether with the help of drugs.

Bipolar Expeditions argues that mania and depression have a cultural life outside the confines of diagnosis, that the experiences of people living with bipolar disorder belong fully to the human condition, and that even the most so-called rational everyday practices are intertwined with irrational ones. Martin’s own experience with bipolar disorder informs her analysis and lends a personal perspective to this complex story.

Emily Martin is professor of anthropology at New York University. Her books include Flexible Bodies: Tracking Immunity in American Culture from the Days of Polio to the Age of AIDS and The Woman in the Body: A Cultural Analysis of Reproduction.

"[Emily Martin's] serious and engaging book...is a much an ethnographical study as it is an autobiographical account. Martin...goes beyond just seeing how medicated bipolar patients deal with their illness: she argues that at least one aspect of bipolar disorder is today seen as a model for a certain type of productive behavior in society. This positive reading of mania comes...to be part of the way that bipolar patients internalize their illness. Martin's book documents our late 20th and early 21st century and its treatment and rehabilitation of bipolar disorder. In examining our world she shows how we have moved from [a] culture of narcissism to a world of mania."—Sander L. Gilman, Lancet

"This book is exceptional in that it spans the fields of anthropology, psychology, psychiatry, and sociology. Martin expertly incorporates the literature from these fields with lay perspectives and experiences from support groups and clinical subjects. This book provides new insights and a deeper understanding of the bipolar experience in America."—Rif S. El-Mallakh, American Journal of Psychiatry

"Anthropologist Martin continues with her long-standing project of unpacking U.S. values, categories, and, in this case, psychopathology as artifacts of history and society with a focus on their cultural rendering, shifting content, and context....General audiences as well as specialists who have particular interest in the social and cultural life of mental health in the contemporary U.S. will appreciate this book."—S. Ferzacca, Choice

"If there is a single thread that runs through this timely, well-researched and wide-ranging book, it is that bipolar disorder is a framework of our time for understanding and even facilitating new conceptions of rationality, irrationality, mood and motivation."—Roy Richard Grinker, Project Muse

"This book provides a very welcome development (substantive and theoretical) in the field of anthropology, but economists, politicians, and historians reflecting on the recent depression in the US, and the 'cold' caught by other 'Western' countries, would also do well to read it."—Christine McCourt, Journal of the Royal Anthropological Institute

"Emily Martin shatters common sense distinctions of public and private, individual and communal. In the process, she makes sense of what may seem counter-intuitive on the surface: the conscious self-presentation and sociality of people living with the diagnosis of manic depression."—Helena Hansen, American Journal of Psychiatry's Residents' Journal

"In this exciting book, Martin brilliantly sketches out a relationship between the frenetic pace of modern life and the way in which bipolar disorder is imagined and evoked. Martin describes the way the diagnosis comes to carry meaning for those who hold it and the cultural dimensions of the way in which the illness is understood and experienced."—Tanya Luhrmann, author of Of Two Minds: An Anthropologist Looks at American Psychiatry

"Learned, imaginative, and insightful, Bipolar Expeditions explores experience, stigma, and performance using the varied tools of ethnography, history, and social theory. Martin's readers will return from that contested and new-found land called mania with a richer and more sophisticated understanding of a fundamental aspect of the human condition."—Charles Rosenberg, Harvard University

"This is a gracefully written, lively, and wholly fascinating book. Martin offers a rich and multifaceted portrait of the role of bipolar illness—and of our notions about bipolar illness—in contemporary American society. The book is broad-ranging, both in its focus and in the theoretical perspectives it employs. I do not know of any other books that address bipolar illness in anything like this fashion."—Louis A. Sass, author of Madness and Modernism

"Bipolar Expeditions is a wonderful book. It is compellingly written, elegantly structured, both deeply scholarly and intensely personal. Destined to become an instant classic, the book offers a strikingly original argument with the potential to change forever how the reader thinks about 'mental illness.' Martin is a master of popular culture. She is also in command of a vast psychiatric literature."—Lorna A. Rhodes, University of Washington