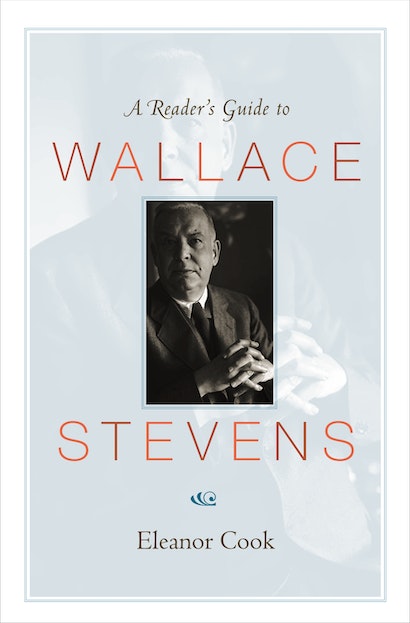 Wallace Stevens is one of the major poets of the twentieth century, and also among the most challenging. His poems can be dazzling in their verbal brilliance. They are often shot through with lavish imagery and wit, informed by a lawyer’s logic, and disarmingly unexpected: a singing jackrabbit, the seductive Nanzia Nunzio. They also spoke — and still speak — to contemporary concerns. Though his work is popular and his readership continues to grow, many readers encountering it are baffled by such rich and strange poetry.


Eleanor Cook, a leading critic of poetry and expert on Stevens, gives us here the essential reader’s guide to this important American poet. Cook goes through each of Stevens’s poems in his six major collections as well as his later lyrics, in chronological order. For each poem she provides an introductory head note and a series of annotations on difficult phrases and references, illuminating for us just why and how Stevens was a master at his art. Her annotations, which include both previously unpublished scholarship and interpretive remarks, will benefit beginners and specialists alike. Cook also provides a brief biography of Stevens, and offers a detailed appendix on how to read modern poetry.

Eleanor Cook is Professor Emerita of English at the University of Toronto. Her books include Enigmas and Riddles in Literature, Against Coercion: Games Poets Play, and Poetry, Word-Play, and Word-War in Wallace Stevens (Princeton).

"A Reader's Guide to Wallace Stevens is a solid reference work that will help open doors for a wide variety of readers. It will be especially useful to instructors who are beginning to teach Stevens, providing them with sources, analogues, translations, and other materials that will help students connect with Stevens' work with ease and pleasure."—Janet McCann, The Wallace Stevens Journal

"Although the biographical and critical literature on this demanding modern American poet is extensive, this is a valuable and rich addition to that literature. Cook provides short paragraphs about the poems, each preceded by the poem's publication history. When more than one version of the poem exists, she provides necessary and interesting information about variations."—B. Wallenstein, Choice

"A Reader's Guide to Wallace Stevens is designed for all these types of Stevens's readers—the knowledgeable, the studious, the enthusiastic, the occasional, the curious, the baffled but persistent at all levels."—William Baker, Library Review

"Cook's annotated catalogue of Stevens's gaudy particulars is, like her other recent book on riddle and enigma, mesmerizing . . . . The section-by-section analyses of Stevens's longer poems are invaluable. . . . All the individual glosses . . . are, where relevant, cross-referenced to one another, giving the effect of diagonal threads running under the whole of Stevens's published work. . . . These intra-Stevensian echoes are placed side by side with allusions to literary, philosophical, and biblical history, so that what you end up with is a version of world literature in which Stevens is always nearby, like some exotic common denominator."—Paul Grimstad, Yale Review

"In addition to superb commentary, there's an Appendix—27 golden pages—on how to read poetry. And the guide to Stevens's poems is full of shrewd, humane, often witty insights into a poetry that we thought we had gotten over."—Tom D'Evelyn, The Books we loved in '07

"Cook's Reader's Guide provides both the broad overviews and local glosses needed by serious students of Stevens's difficult poetry. . . . Those glosses . . . go well beyond simply noting publication history and defining unfamiliar terms. Indeed, many are small fragmentary essays, comprising paragraph-long overviews and important readings of individual phrases and images. . . . Cook's glosses, like Stevens's lines, transform what might be woody apparatus into provocations to see anew. The . . . appendix, 'How To Read Poetry, Including Stevens' . . . should be of great service to novice readers of Stevens. Some of her advice here is commonsense and elementary, but some . . . is fresh and even fun."—Michael Thurston, American Literary Scholarship

"It looks to be an invaluable companion for readers of a great poet whom many find difficult, although attractive. I am most happy to have this splendid book in my library—where it will be in use as often as on the shelf. And I shall certainly be recommending it to colleagues and friends."—Alastair Fowler, professor emeritus, University of Edinburgh

"This is a much-needed book that offers a comprehensive guide to the poetry of Wallace Stevens. For each poem, Cook offers a brief general comment, then a series of glosses on difficult phrases and obscure references. Both comments and glosses are by turns incisive, erudite, and witty, and often shed more light on the poems than much more drawn-out and elaborate commentaries. Cook's prose is elegantly spare and direct. Her guide allows at every point for multiple meanings and resonances."—Roger Gilbert, Cornell University

"New readers of Stevens must own this book, the ideal guide for starting out. . . . Cook's succinct summaries and annotations are confidently expert. . . . Long admired for her attention to syntactical word-play, Cook has a fine way here of describing meter as an aspect of form. . . . The book is littered with many . . . marvelous condensations. . . . The finest introductory close reading of 'The Man with the Blue Guitar' that has been published. . . . Although this book would seem to provide an atomized, poem-by-poem experience, its reader's greatest reward is the sense that he or she gets of the overall shape of the Stevensian project."—Al Filreis, University of Pennsylvania