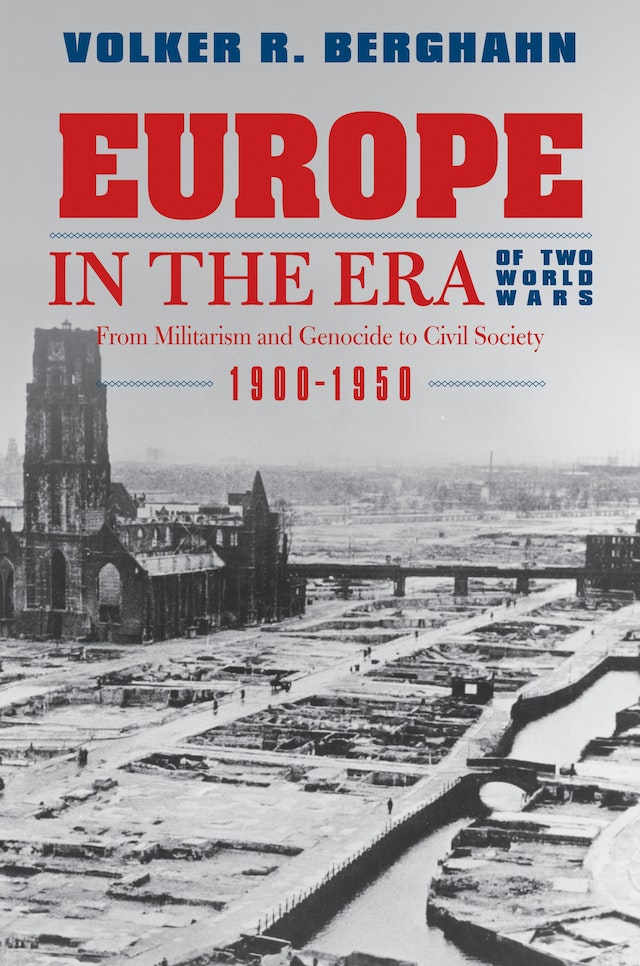 How and why did Europe spawn dictatorships and violence in the first half of the twentieth century, and then, after 1945 in the west and after 1989 in the east, create successful civilian societies? In this book, Volker Berghahn explains the rise and fall of the men of violence whose wars and civil wars twice devastated large areas of the European continent and Russia — until, after World War II, Europe adopted a liberal capitalist model of society that had first emerged in the United States, and the beginnings of which the Europeans had experienced in the mid-1920s.

Berghahn begins by looking at how the violence perpetrated in Europe’s colonial empires boomeranged into Europe, contributing to the millions of casualties on the battlefields of World War I. Next he considers the civil wars of the 1920s and the renewed rise of militarism and violence in the wake of the Great Crash of 1929. The second wave of even more massive violence crested in total war from 1939 to 1945 that killed more civilians than soldiers, and this time included the industrialized murder of millions of innocent men, women, and children in the Holocaust. However, as Berghahn concludes, the alternative vision of organizing a modern industrial society on a civilian basis — in which people peacefully consume mass-produced goods rather than being ‘consumed’ by mass-produced weapons — had never disappeared. With the United States emerging as the hegemonic power of the West, it was this model that finally prevailed in Western Europe after 1945 and after the end of the Cold War in Eastern Europe as well.

Volker R. Berghahn is Seth Low Professor of History at Columbia University. He is the author of numerous books on modern German and European history and on European-American relations in the twentieth century including, most recently, America and the Intellectual Cold Wars in Europe (Princeton).

"This is a most thought-provoking and penetrating study, based on superb scholarship and written by a masterly mind."—Stanley Hoffman, Foreign Affairs

"[Berghahn] writes essentially and succinctly about what he characterizes as the 'men of violence' and the horrors they wrought upon the world. Focusing on German leaders and military and their conduct in wars and civil strife, Berghahn argues powerfully for German responsibility in WWI as well as WWII."—Choice

"In an insightful discussion, [Berghahn] makes direct connections between German brutalities in Africa (against the Hereros, for example) and aggressive, social Darwinist modes of thought that produced the Schlieffen Plan and other indications of the increasing European propensity to resort to violence. . . . Berghahn's spare and gripping account of these events incorporates much recent historical literature."—Hunt Toohey, Independent Review

"An outstanding . . . thoughtful, highly stimulating . . . [and] convincing essay about the long epoch of violence during the past century."—Hartmut Kaelble, H-Soz-u-Kult

"Berghahn's book is well worth reading. It will also function well in university courses on modern Europe as a short, well-argued and provocative supplement to traditional textbooks. Being very clearly plotted as the narrative of a struggle between good and evil, it might even serve to illustrate a few of Hayden White's points about the use of literary conventions by historians."—Nils Arne Sørensen, European History Quarterly

"This excellent book about Europe in the era of the world wars has many virtues. The questions that drive it are, indeed, the central ones for twentieth-century European history. Among the many books on this subject that have appeared around the millennium, I know of no other that conveys the key problems so well and so concisely."—Eric Weitz, University of Minnesota, author of A Century of Genocide: Utopias of Race and Nation

"Volker Berghahn has written a concise and tightly argued interpretation of European history in the first half of the twentieth century. Written in a clear and accessible style, this book is ambitious and original, and is particularly strong in seeing Europe not as self-contained, but situating its development in terms of both colonialism and America."—Mary Nolan, New York University, author of Visions of Modernity: American Business and the Modernization of Germany