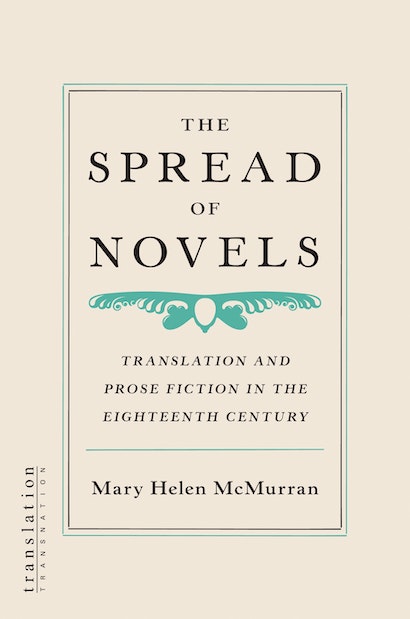 Fiction has always been in a state of transformation and circulation: how does this history of mobility inform the emergence of the novel? The Spread of Novels explores the active movements of English and French fiction in the eighteenth century and argues that the new literary form of the novel was the result of a shift in translation. Demonstrating that translation was both the cause and means by which the novel attained success, Mary Helen McMurran shows how this period was a watershed in translation history, signaling the end of a premodern system of translation and the advent of modern literary exchange.


McMurran illuminates aspects of prose fiction translation history, including the radical revision of fiction’s origins from that of cross-cultural transfer to one rooted by nation; the contradictory pressures of the book trade, which relied on translators to energize the market, despite the increasing devaluation of their labor; and the dynamic role played by prose fiction translation in Anglo-French relations across the Channel and in the New World. McMurran examines French and British novels, as well as fiction that circulated in colonial North America, and she considers primary source materials by writers as varied as Frances Brooke, Daniel Defoe, Samuel Richardson, and Françoise Graffigny. The Spread of Novels reassesses the novel’s embodiment of modernity and individualism, discloses the novel’s surprisingly unmodern characteristics, and recasts the genre’s rise as part of a burgeoning vernacular cosmopolitanism.

Mary Helen McMurran is assistant professor of English at the University of Western Ontario.

"McMurran's book valuably examines translation's role in the beginnings of English copyright law. . . . In demonstrating that nations believed to be unilingual were really multilingual, in affirming their readers' cosmopolitanism to the extent that they dipped into others' literatures, McMurran and her fellow essayists add significantly to studies of the English novel."—Nancy Vogeley, Eighteenth-Century Studies

"McMurran draws convincing connections among the formations of nation, cosmopolitanism, and the novel, and she demonstrates the importance of the eighteenth century in producing these shifts. Her original and well-informed approach will attract considerable attention."—Felicity Nussbaum, University of California, Los Angeles

"This important book establishes why the novel is not just English and why, indeed, even the English novel was never just English, or transatlantic, or Anglophone, but first and foremost translated and trans-Channel. I admire McMurran's conceptualization of translation's role in the formation of the novel in Europe and its colonies, and the fresh interpretations of texts, deftly combined with historical detail, from which her conclusions are drawn."—April Alliston, Princeton University