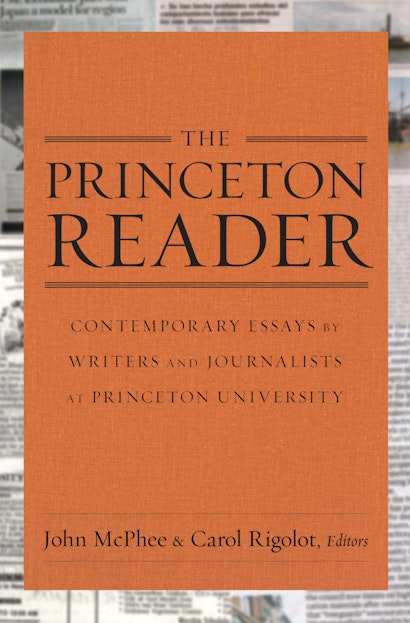 From a Swedish hotel made of ice to the enigma of UFOs, from a tragedy on Lake Minnetonka to the gold mine of cyberpornography, The Princeton Reader brings together more than 90 favorite essays by 75 distinguished writers. This collection of nonfiction pieces by journalists who have held the Ferris/McGraw/Robbins professorships at Princeton University offers a feast of ideas, emotions, and experiences — political and personal, light-hearted and comic, serious and controversial — for anyone to dip into, contemplate, and enjoy.

The volume includes a plethora of topics from the environment, terrorism, education, sports, politics, and music to profiles of memorable figures and riveting stories of survival. These important essays reflect the high-quality work found in today’s major newspapers, magazines, broadcast media, and websites. The book’s contributors include such outstanding writers as Ken Armstrong of the Seattle Times; Jill Abramson, Jim Dwyer, and Walt Bogdanich of the New York Times; Evan Thomas of Newsweek; Joel Achenbach and Marc Fisher of the Washington Post; Nancy Gibbs of Time; and Jane Mayer, John McPhee, John Seabrook, and Alex Ross of the New Yorker.

The perfect collection for anyone who enjoys compelling narratives, The Princeton Reader contains a depth and breadth of nonfiction that will inspire, provoke, and endure.

John McPhee's many books include Annals of the Former World, for which he was awarded the Pulitzer Prize in 1999. Carol Rigolot is executive director of the Humanities Council at Princeton University.

"Reading the anthology under review is a learning experience; at least it is for those still taking journalism very seriously and potentially to news workers the globe over. In today's multi-channel media environment, governed by new media and web blogs, we constantly rely on enterprises such as this, to illuminate the as yet reassuring boundaries between news and entertainment media."—Adriana Neagu, American British and Canadian Studies

"This is an extremely valuable collection of some of the best writing in the field of journalism. Distinctive and appealing, this is one-stop shopping for delicious writing across different media forms."—Charlotte Grimes, Syracuse University

"I read this book with great pleasure. Its kaleidoscopic variety is a virtue and leads us to enjoyable surprises."—Jonathan Schell, author of The Seventh Decade