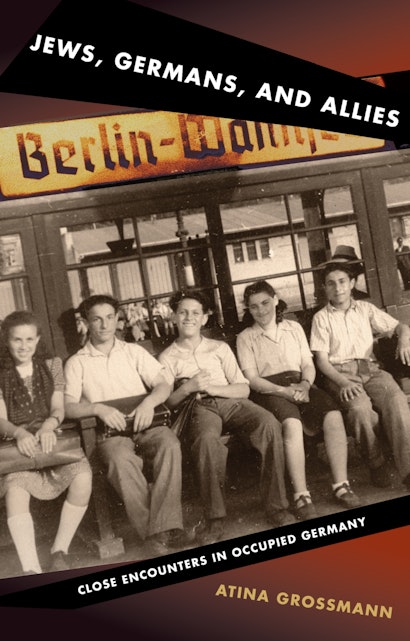 In the immediate aftermath of World War II, more than a quarter million Jewish survivors of the Holocaust lived among their defeated persecutors in the chaotic society of Allied-occupied Germany. Jews, Germans, and Allies draws upon the wealth of diary and memoir literature by the people who lived through postwar reconstruction to trace the conflicting ways Jews and Germans defined their own victimization and survival, comprehended the trauma of war and genocide, and struggled to rebuild their lives.


In gripping and unforgettable detail, Atina Grossmann describes Berlin in the days following Germany’s surrender — the mass rape of German women by the Red Army, the liberated slave laborers and homecoming soldiers, returning political exiles, Jews emerging from hiding, and ethnic German refugees fleeing the East. She chronicles the hunger, disease, and homelessness, the fraternization with Allied occupiers, and the complexities of navigating a world where the commonplace mingled with the horrific. Grossmann untangles the stories of Jewish survivors inside and outside the displaced-persons camps of the American zone as they built families and reconstructed identities while awaiting emigration to Palestine or the United States. She examines how Germans and Jews interacted and competed for Allied favor, benefits, and victim status, and how they sought to restore normality — in work, in their relationships, and in their everyday encounters.

Jews, Germans, and Allies shows how Jews were integral participants in postwar Germany and bridges the divide that still exists today between German history and Jewish studies.

Atina Grossmann is professor of history at Cooper Union. She is the author of Reforming Sex: The German Movement for Birth Control and Abortion Reform, 1920-1950 and the coeditor of Crimes of War: Guilt and Denial in the Twentieth Century.

"Atina Grossmann's great insight is that the postwar reappearance of a traumatized Jewish population—and the survivors' high rates of marriage, pregnancy and childbearing—cannot be understood apart from the parallel victimhood of the 'German' population."—Paul Grant, Books & Culture

"Grossmann has succeeded marvelously in reintegrating the history of Jews into the history of postwar Germany. Her book . . . is an essential contribution to the social and cultural history of the immediate postwar era."—Benjamin Lapp, Central European History

"Grossmann, herself the daughter of German-Jewish refugees, . . . has written the definitive history of [Allied-occupied Germany]."—Jewish Post and News

"Atina Grossman's tale of the complicated relationship between surviving Jews, Germans, and Allies is enthralling and well written. The author has an eye for the telling anecdote and genuine sympathy for the people she writes about. Her extensive and creative use of German and Yiddish sources and her family connections to the Jewish DPs make the book both personal and scholarly."—Hal Elliott Wert, Journal of Military History

"Despite legend and conventional wisdom, there was intense interaction between Jews and Germans. Germans and Jews have both overlooked or forgotten this episode in their joint history, which Grossmann brings to life with a particularly fascinating examination of gendered experience and sexuality."—Jay Howard Geller, American Historical Review

"This book makes a significant contribution by illuminating the fascinating and complex interactions between surviving Jews and their neighbors in postwar Germany."—Timothy Schroer, H-Net Reviews

"Any historian with even the vaguest idea of the monumental effort that goes into producing a research monograph like this, with thousands of archival and secondary sources used (the notes alone run to some 100 pages), will find it difficult to level serious criticism against it. Thoroughly researched and beautifully written, Jews, Germans, and Allies has rightfully won a number of awards."—Kay Schiller, European History Quarterly

"Jews, Germans, and Allies is an important historical document, especially in light of those revisionists who would impose a universal amnesia about the suffering and losses incurred during the Holocaust. The grim statistics that Ms. Grossmann presents in her carefully researched and well-organized book carry evidence of the terrible truth. But the testimony of the survivors she quotes contains the final, ineradicable facts of history."—Hilma Wolitzer, East Hampton Star

"[Grossmann] has achieved that most enviable of goals: she has written a book about Jewish/non-Jewish relations that will be required reading for any scholar of German postwar history for many years to come. Indeed, I would go as far as to suggest that Grossmann's Jews, Germans, and Allies is one of those few books that appear in each decade that will be read with considerable benefit and enjoyment not only by historians of any specialization but also by any scholar with an arts and humanities or social science background and a smattering of historical sensitivity."—Lars Fischer, Journal of Modern History

"All told, Grossmann's book paints a fascinating portrait of the 'close encounters' in occupied Germany among Jews, Germans, and Allies. Her gendered lens helps better nuance our understanding of this chaotic period. I highly recommend this book for scholars, students, and the general public."—Lynn Rapaport, Holocaust and Genocide Studies

"A pioneering and innovative study that will undoubtedly stimulate work in the fields of German and Jewish post-war history in the coming years."—Shirli Gilbert, Patterns of Prejudice

"Atina Grossmann has written a beautiful book, methodologically sophisticated and rich in its detailed reconstruction of everyday life. It opens a grand view on the fascinating and critical period of the years immediately following the end of World War II in Europe."—Jan T. Gross, author of Neighbors

"Jews, Germans, and Allies stakes out new historical and theoretical ground. Beautifully written, studded with verbal and pictorial images, Grossmann's text takes us on a gripping historical journey. A master narrative: she maintains complete control of the riveting history she tells, while weaving in amazing snapshots of individual lives and contemporary reports."—Debórah Dwork, director of the Strassler Family Center for Holocaust and Genocide Studies at Clark University

"Diving into the wreckage, Professor Grossmann expertly sifts through the chaos, refusing reductionist paradigms and describing in detail the many complex encounters between Germans, Americans, Brits, Russians, French, and Jews in postwar Germany. This is fascinating social history that focuses as much on women as on men, on the occupiers as well as on the occupied."—Helen Epstein, author of Children of the Holocaust and Where She Came From

"An evocative and richly documented book set in the rubble-strewn streets of postwar Berlin, in the Jewish refugee camps, and in the offices of the Allied occupiers. With an eye for drama and an ear for distinctive tonalities, Grossmann interweaves the three closely related and intersecting stories of Jewish survivors, defeated Germans, and American occupiers to show how these 'close encounters' produced contrapuntal memories of the experience of World War II and the Holocaust. This remarkable work transcends the genres of German and Jewish history and sets a new standard for writing the history of 'entanglements' in the post-1945 era."—Anson Rabinbach, Princeton University

"Atina Grossmann's book is, without any doubt, a pioneering work on postwar German, Jewish, and partly also American history. Grossmann uses a whole range of previously unknown sources. The picture emerging from this wealth of new material is quite different from the many stereotypes, which still dominate our view of this unlikely historical episode. The most striking difference is the crucial role that gender plays in her analysis."—Michael Brenner, University of Munich

"Few other books, if any, have told the story of Germany's postwar Jews with such an eye to their interaction with non-Jewish Germans. Grossmann shows that both groups were victims in different ways, but that the status and character of their victimhood was of course very different. She has an eye for telling detail, and the gendered aspects to the story are particularly rich."—Mark Roseman, Indiana University