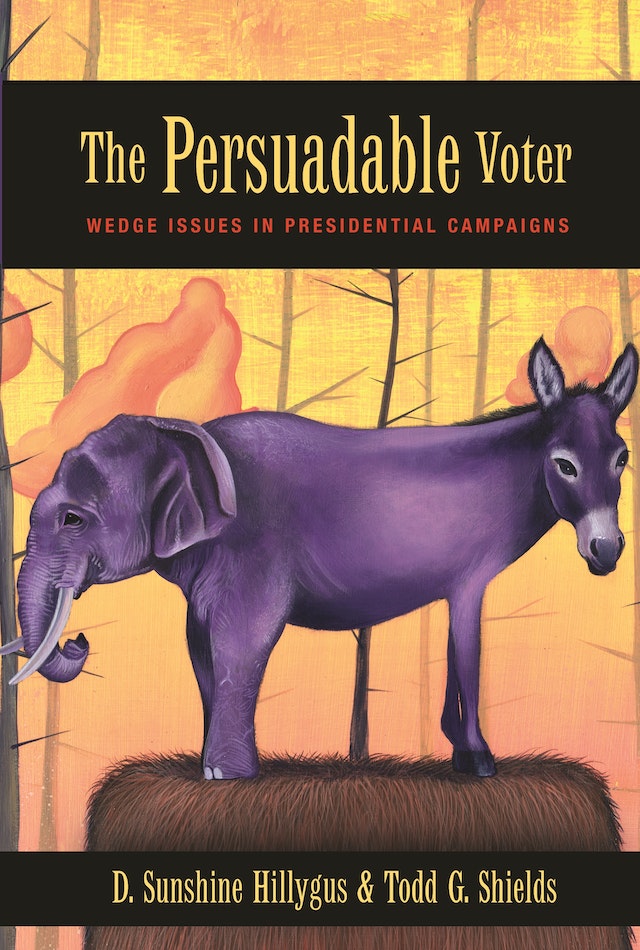 The use of wedge issues such as abortion, gay marriage, and immigration has become standard political strategy in contemporary presidential campaigns. Why do candidates use such divisive appeals? Who in the electorate is persuaded by these controversial issues? And what are the consequences for American democracy? In this provocative and engaging analysis of presidential campaigns, Sunshine Hillygus and Todd Shields identify the types of citizens responsive to campaign information, the reasons they are responsive, and the tactics candidates use to sway these pivotal voters. The Persuadable Voter shows how emerging information technologies have changed the way candidates communicate, who they target, and what issues they talk about. As Hillygus and Shields explore the complex relationships between candidates, voters, and technology, they reveal potentially troubling results for political equality and democratic governance.

The Persuadable Voter examines recent and historical campaigns using a wealth of data from national surveys, experimental research, campaign advertising, archival work, and interviews with campaign practitioners. With its rigorous multimethod approach and broad theoretical perspective, the book offers a timely and thorough understanding of voter decision making, candidate strategy, and the dynamics of presidential campaigns.

"[P]ath-breaking. . . . The authors' novel approach to identifying both persuadable voters and effective micro-targeting techniques provides the most powerful evidence for their argument. The Persuadable Voter reminds us that, overall, the outcome of elections and the face of politics hinge on the ability of parties, candidates, and voters to adapt to each other and to the changing nature of political appeals."—David A. M. Peterson, Science

"In their outstanding study, Hillygus and Shields take what appears to be a singular topic—how wedge issues affect presidential campaigns—and fully develop a theoretical and empirical analysis of presidential campaigns, voting behavior, electoral strategies, and message framing. . . This work alone should expand the field of research on campaigns, elections, and voter behavior to new areas."—J. Michael Bitzer, Choice

"The Persuadable Voter is clearly a well researched book, with sound arguments and complex methodologies to back these arguments up."—Mark Rice, In-Spire, Journal of Law, Politics and Societies

"Written in an accessible style, The Persuadable Voter is an engaging reading, especially distinguishing itself in clarity and the high currency of the themes examined. It is certain to benefit the general public as well as a specialized audience, political and social scientists, journalists and politicians alike."—Adriana-Cecilia Neagu, ABC Journal

"The Persuadable Voter should prove a cornerstone of contemporary scholarship about campaigns. The theory of wedge politics is compelling no matter how difficult it may be to encourage partisans to defect in today's polarized politics. Hillygus and Shields have established cross-pressures as a crucial factor that moderates the effects of campaigns, and their empirical findings constitute striking evidence of such effects. Finally, the book itself is a model for how to present statistical analysis clearly, to mingle social science with lively anecdotes, and to challenge lazy conventional wisdom in provocative ways. It deserves to be read by academics and political practitioners alike."—John Sides, Public Opinion Quarterly

"Buell and Sigelman provide a crucial foundation for future work, as it is rich description of the type presented in this book that allows scholars to derive more general hypotheses."—Yanna Krupnikov, Perspectives on Politics

"Hillygus and Shields cut through the increasingly stale debate about electoral polarization to show the real complexity of opinion. At the same time, they contest the false distinction between mobilization and persuasion. They do so with an innovative mix of research strategies."—Richard Johnston, University of Pennsylvania

"The Persuadable Voter is clearly written, accessible, and highly engaging. The themes examined are interesting, and the analysis of mass political behavior is solid. The book will find a wide audience among political science graduate and undergraduate students, and will be of interest to journalists and politicians."—Adam Berinsky, Massachusetts Institute of Technology

"Hillygus and Shields find more persuadable voters out there than I believed existed and the book's conception of cross-pressuring issues is compelling. This is a top-notch piece of research that will add significantly to our understanding of presidential campaigns."—Daron Shaw, University of Texas, Austin