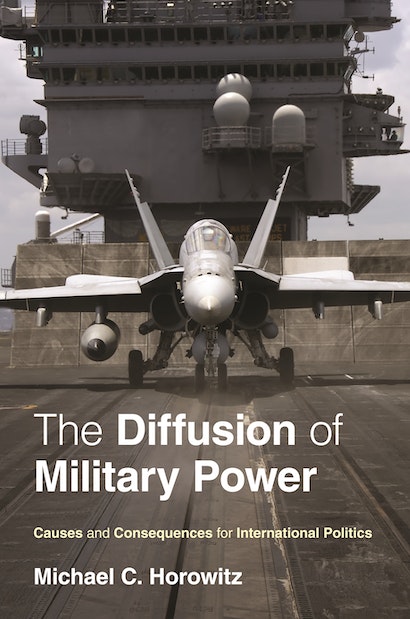 The Diffusion of Military Power examines how the financial and organizational challenges of adopting new methods of fighting wars can influence the international balance of power. Michael Horowitz argues that a state or actor wishing to adopt a military innovation must possess both the financial resources to buy or build the technology and the internal organizational capacity to accommodate any necessary changes in recruiting, training, or operations. How countries react to new innovations — and to other actors that do or don’t adopt them — has profound implications for the global order and the likelihood of war.


Horowitz looks at some of the most important military innovations throughout history, including the advent of the all-big-gun steel battleship, the development of aircraft carriers and nuclear weapons, and the use of suicide terror by nonstate actors. He shows how expensive innovations can favor wealthier, more powerful countries, but also how those same states often stumble when facing organizationally complicated innovations. Innovations requiring major upheavals in doctrine and organization can disadvantage the wealthiest states due to their bureaucratic inflexibility and weight the balance of power toward smaller and more nimble actors, making conflict more likely. This book provides vital insights into military innovations and their impact on U.S. foreign policy, warfare, and the distribution of power in the international system.

Michael C. Horowitz is assistant professor of political science at the University of Pennsylvania.

"Michael Horowitz's The Diffusion of Military Power is a model for twenty-first-century security studies: an important question (how do military innovations spread), interdisciplinary theory, solutions to important historical puzzles, insight into contemporary policy problems, and the use of rigorous qualitative and quantitative methods. A triumph."—Dan Reiter, Emory University

"At the core of this valuable piece of work is the notion of 'adoption capacity,' a concept that Horowitz develops and explores in a set of well-chosen case studies that he examines using a variety of methodologies. In cases as diverse as the introduction of carrier-based naval warfare and suicide bombing, he explores the ways new forms of warfare are adopted, and the systems-level consequences that result. An original, thoughtful, and useful piece of scholarship."—Eliot A. Cohen, Johns Hopkins University

"In The Diffusion of Military Power, Michael Horowitz explains how and why military innovations are adopted by state and nonstate actors. These insights are particularly valuable at a time of rapid technological, strategic, and organizational change such as we are living through today, and have immediate implications for the balance of power and the international system. Highly recommended."—John A. Nagl, president of the Center for a New American Security and author of Learning to Eat Soup with a Knife

"This book makes an important contribution to the scholarship on military diffusion and international power. It will be of much interest to scholars of international security, strategic studies, and military affairs. The book's greatest theoretical contribution is its discussion of the systemic consequences of diffusion."—Emily Goldman, United States Central Command

"Horowitz makes an excellent contribution to the international relations literature generally and work on military innovations particularly. His theory has immediate relevance to discussions about the future of American military strategy, and is helpful in understanding the decisions states face in threatening environments. This is a very good book."—Glenn Palmer, Pennsylvania State University