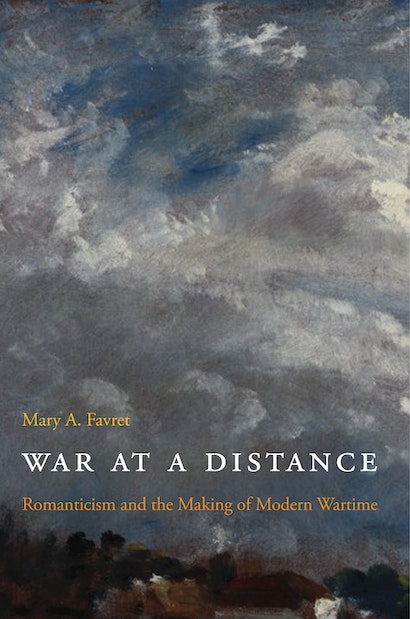 What does it mean to live during wartime away from the battle zone? What is it like for citizens to go about daily routines while their country sends soldiers to kill and be killed across the globe? Timely and thought-provoking, War at a Distance considers how those left on the home front register wars and wartime in their everyday lives, particularly when military conflict remains removed from immediate perception, available only through media forms. Looking back over two centuries, Mary Favret locates the origins of modern wartime in the Napoleonic era and describes how global military operations affected the British populace, as the nation’s army and navy waged battles far from home for decades. She reveals that the literature and art produced in Britain during the late eighteenth and early nineteenth centuries obsessively cultivated means for feeling as much as understanding such wars, and established forms still relevant today.


Favret examines wartime literature and art as varied as meditations on the Iliad, the history of meteorology, landscape painting in India, and popular poetry in newspapers and periodicals; she locates the embedded sense of war and dislocation in works ranging from Austen, Coleridge, and Wordsworth to Woolf, Stevens, and Sebald; and she contemplates how literature provides the public with methods for responding to violent calamities happening elsewhere. Bringing to light Romanticism’s legacy in reflections on modern warfare, this book shows that war’s absent presence affects home in deep and irrevocable ways.

Mary A. Favret is associate professor of English at Indiana University. She is the author of Romantic Correspondence: Women, Politics and the Fiction of Letters.

"Delivering its impressive literary insights in a tone of humane regret, War at a Distance is a reminder of shared responsibility and shared concern. In Favret's compelling image, we are suspended before and between armed conflicts on the shakiest of rope-bridges, and the place of safety we are heading for is out of sight."—Times Literary Supplement

"Thoughtful, sophisticated, and subtle, this book analyzes the way war figures in Romantic writing, i.e., the way Romantic writing figuratively engages civilians' always-mediated experience of distant warfare. . . . Engaging clearly and intelligently with critical work by such thinkers as Raymond Williams, Dominick LaCapra, Susan Sontag, and Amanda Anderson, this book demonstrates that the contemporary experience of wartime has its roots in the Romantic imagination."—Choice

"I found Favret's narrative compelling. To connect all the necessary dots, she needed to lace together a fine web of interrelated texts of all kinds—verbal, visual, and historical. The final product stands up to the weight of scrutiny as well as entertains with a bravura performance of looking back and ahead in equal measures. Mired ourselves at a distance in our endless War on Terror, we should look long and hard at Favret's War at a Distance not only for the sources of our coping mechanisms, but also for the origins of how we separate ourselves from the reality of waging war and, perhaps unconsciously, contribute to how wars begin."—Bob Duggan, The Big Think

"War at a Distance deserves to be read and argued about in history, comparative literature and classics for years to come. . . . [T]his is the kind of book that encourages you to try out its ideas on works you may already know, and then rethink them, just as it makes you want to learn about the poets it discusses and the critics who played a role in its writing."—James Tatum, New Books on Literature

"Favret also manages the delicate task of reading the past in terms of our present without obliterating the former's distinctiveness. As erudite in the history and discourses of war as it is in the literature and culture of Romanticism, War at a Distance is an essential book in the field."—Ian Duncan, Studies in English Literature

"War at a Distance moves with impressive sweep between wartimes past and present, from the Revolution and Napoleonic conflicts of two centuries ago to the first and second Gulf Wars. The book is a stirring and powerful meditation on what it means to live in a time of war. . . . Mary Favret's book teaches us to attend to the tumult that passes just out of reach of conscious apprehension; it attunes the reader to the sights and sounds of war passing beyond our ken. War at a Distance is a stunning achievement.""—Noel Jackson, Wordsworth Circle

"[T]his is a brilliant and sophisticated book. It offers a wonderfully comprehensive and innovative study that builds not only upon Favret's own formative work on Romanticism and war, but also masterfully condenses and reorients the growing body of work in the field that has appeared over the last fifteen years."—Neil Ramsey, Studies in Romanticism

"One of the most significant contributions to the category of general Romanticism this year is Mary A. Favret's War at a Distance. [It] is a consistently insightful consideration of the connections between wartime and everyday life—how the pain and suffering of soldiers is experienced and processed by their family and friends, the people who are left behind."—Year's Work in English Studies

"This book is a masterpiece. Brilliant, brave, and beautifully written, it combines precision with lyricism. It will be required reading for scholars and students in Romantic studies, but its appeal will hardly be limited to them, since the topic is relevant to anyone interested in the nature and effects of war in our own time."—Kevis Goodman, University of California, Berkeley

"War at a Distance is an important, exquisite, and thoughtful consideration of the affective experiences of wartime. Favret helps us to reconsider the Romantic imagination as one haunted by the measurelessness of war's effects."—Celeste Langan, University of California, Berkeley

"Favret's vividly realized and impeccably argued analysis demonstrates that state-sponsored violence was not merely a political or military matter, but had profound consequences for how Romantic thinkers—many living far from the ground zeroes dotting the globe—imagined and conducted themselves, experienced time, and thought about the future. War at a Distance is not only a sobering reflection on what it means to live with oneself and with others amid military modernity, but also an irrepressible call for peace."—David Clark, McMaster University