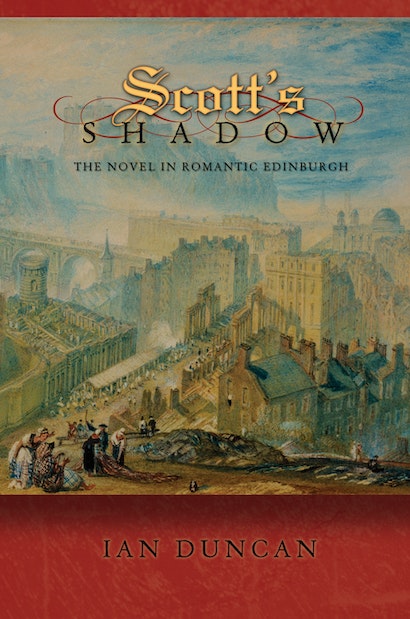 Scott’s Shadow is the first comprehensive account of the flowering of Scottish fiction between 1802 and 1832, when post-Enlightenment Edinburgh rivaled London as a center for literary and cultural innovation. Ian Duncan shows how Walter Scott became the central figure in these developments, and how he helped redefine the novel as the principal modern genre for the representation of national historical life.


Duncan traces the rise of a cultural nationalist ideology and the ascendancy of Scott’s Waverley novels in the years after Waterloo. He argues that the key to Scott’s achievement and its unprecedented impact was the actualization of a realist aesthetic of fiction, one that offered a socializing model of the imagination as first theorized by Scottish philosopher and historian David Hume. This aesthetic, Duncan contends, provides a powerful novelistic alternative to the Kantian-Coleridgean account of the imagination that has been taken as normative for British Romanticism since the early twentieth century. Duncan goes on to examine in detail how other Scottish writers inspired by Scott’s innovations — James Hogg and John Galt in particular — produced in their own novels and tales rival accounts of regional, national, and imperial history.

Scott’s Shadow illuminates a major but neglected episode of British Romanticism as well as a pivotal moment in the history and development of the novel.

Ian Duncan is professor of English at the University of California, Berkeley. He is the author of Modern Romance and Transformations of the Novel and the coeditor of Scotland and the Borders of Romanticism.

"A compelling account of Scottish fiction between 1802 and 1832, when Edinburgh rivalled London as a centre for literary and cultural innovation. Duncan shows Walter Scott's key role redefining the novel as the principal modern genre for the representation of national historical life."—Times Higher Education

"Duncan offers here a complex, fascinating monograph on the Scottish novel in the age of Walter Scott. . . . Mandatory reading for scholars of 19th-century studies and the history of the novel."—M.E. Burstein, Choice

"Certainly Duncan's sophisticated commentary is poised to become required reading for those with an interest in the Romantic novel, and will prove to be an invaluable resource for Scott scholars for many years to come."—Ross Alloway, Edinburgh Review

"While this book showcases Duncan's impressive originality of thought and assured command of his material, it also demands a high level of concentration from readers. The rigorous research, bold critical thinking and intensive analysis in each chapter reward careful reading. Undergraduates will appreciate being directed to specific parts of the book, but other readers will want to read it thoroughly, certainly revisiting it many times in future."—Meiko O'Halloran, Review of English Studies

"Equally learned and imaginative, the book manages both to offer a sophisticated and wholly original account of the idea of a national culture, while maintaining a rigorous and scholarly account of how the multiple strands of this national debate were rooted in the commercial and political world of Edinburgh."—Penny Fielding, Urban History

"Duncan's Scott's Shadow, an ambitious and learned book . . . offers the first comprehensive account of the flowering of Scottish fiction between 1802 and 1832. . . . The wide sweep of Duncan's argument, the textual rigor, and the rich historical detail make the effort of reading this book worthwhile."—Ann C. Colley, Studies in English Literature

"Scott's Shadow is a valuable addition to the body of critical work on the history of the novel. It should lead to critics and scholars rethinking their assumptions about Scott and his contemporaries for many years to come."—Evan Gottlieb, Studies in Romanticism

"This undoubtedly is the most significant book to appear on the subject of the Romantic-era novel in Scotland since Ina Ferris's The Achievement of Literary Authority (1991). . . . As a whole, this is a demanding, hugely satisfying, and even enthralling book. Unlike some comparable 'theoretical' studies, it is commendable for its attention to detail, close knowledge at key points, presentational qualities, and freedom from inaccuracies."—Peter Garside, Studies In Hogg And His World

"This book requires concentrated reading of its dense though frequently brilliant prose. It adds to the freshness of critical approach that has been building over the past decade with regard to the Scottish novel of the early nineteenth century. Its combination of close reading, new historical and psychoanalytic approaches brings into focus a Romantic print and publishing culture emanating from Scotland that has never before been subjected to such forensic dissection."—Gerard Carruthers, Eighteeenth-Century Studies

"[T]his is an astonishing and marvelous book. It restructures the literary history of the early nineteenth century. It has a major theme which is brilliantly argued, and which leads to a far more general appreciation of the workings of influence. It is full of insights. . . . It has lots of illuminating byways. . . . It is generous in the width of its appreciation and sympathetic understanding of its literary subjects. This is a great work of scholarship."—David Hewitt, Scottish Literary Review

"Scott's Shadow is a splendid achievement. Rich, dense, and provocative, it rereads the novel's status as exemplary genre of national life in the nineteenth century. The most complete account to date of the dynamic matrix of Scottish literary production and reception in the years of Edinburgh's ascendancy as a publishing center, this book will rapidly become standard reading in the history of the British novel and in studies of Romanticism."—Ina Ferris, University of Ottawa

"Ian Duncan's book is an accomplishment of the very first order, a powerful reconceptualizing of both the history of the British novel and of Romanticism. The sweep of Duncan's argument is grounded in one of the most highly focused, richly historical, and textually rigorous critical arguments I've ever read."—Jon Klancher, Carnegie Mellon University

"Scott's Shadow is the product of years of immersion in the literary, political, and reviewing culture of Edinburgh. No one is better qualified to write this book than Ian Duncan, and he accomplishes it with a panache that matches his erudition. This is a compelling book, consistently—even grippingly—readable, and endlessly suggestive. It makes a major, decisive contribution to its subject."—Susan Manning, University of Edinburgh