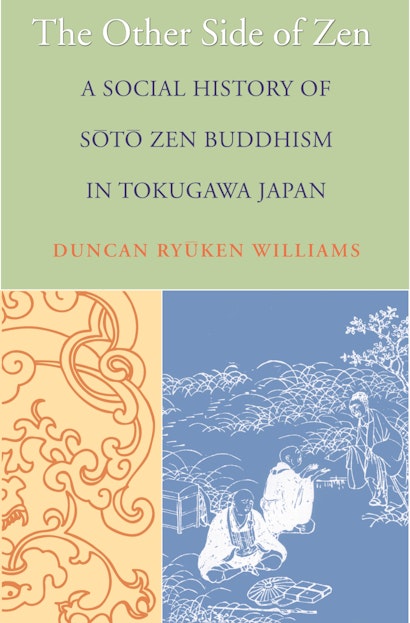 Popular understanding of Zen Buddhism typically involves a stereotyped image of isolated individuals in meditation, contemplating nothingness. This book presents the “other side of Zen,” by examining the movement’s explosive growth during the Tokugawa period (1600-1867) in Japan and by shedding light on the broader Japanese religious landscape during the era. Using newly-discovered manuscripts, Duncan Ryuken Williams argues that the success of Soto Zen was due neither to what is most often associated with the sect, Zen meditation, nor to the teachings of its medieval founder Dogen, but rather to the social benefits it conveyed.

Zen Buddhism promised followers many tangible and attractive rewards, including the bestowal of such perquisites as healing, rain-making, and fire protection, as well as “funerary Zen” rites that assured salvation in the next world. Zen temples also provided for the orderly registration of the entire Japanese populace, as ordered by the Tokugawa government, which led to stable parish membership.

Williams investigates both the sect’s distinctive religious and ritual practices and its nonsectarian participation in broader currents of Japanese life. While much previous work on the subject has consisted of passages on great medieval Zen masters and their thoughts strung together and then published as “the history of Zen,” Williams’ work is based on care ul examination of archival sources including temple logbooks, prayer and funerary manuals, death registries, miracle tales of popular Buddhist deities, secret initiation papers, villagers’ diaries, and fund-raising donor lists.

Duncan Ryūken Williams is Assistant Professor of East Asian Buddhism and Culture at the University of California, Irvine.

"This book is required reading for any student of Zen Buddhism or Japanese religion and will remain a standard reference for years to come."—David E. Riggs, Monumenta Nipponica

"[This book] presents so much new information in such an insightful and accessible manner. By doing so, The Other Side of Zen helps us to begin to realize just how much we do not know and do not understand. Williams shows us several previously unexplored landscapes and gives us a tour of a few of their notable features. One can only hope that the terra incognito he reveals will attract future scholars to map in more detail its ways and byways."—William M. Bodiford, Harvard Journal of Asiatic Studies

"The Other Side of Zen offers a rich, ground-breaking contribution to the history of the Soto Zen sect and of Tokugawa Japan."—Cristina Rocha, Philosophy East & West

"The Other Side of Zen brings to light the vital but little studied social dimension of early modern Japanese Zen. Drawing on a wealth of hitherto untapped sources, Williams offers insightful analyses of how Soto Zen temples won and maintained broad lay support by providing rites for healing and protection in this world and salvation in the next. This fascinating study will be essential reading for students and scholars of Buddhism and Japanese religion and has much to offer anyone interested in the social roles of religion."—Jacqueline Stone, Princeton University

"This is the first significant contribution in a Western language on Soto Zen of this period. The author's approach is innovative. His use of recently discovered sources, well synthesized, has helped the author succeed in demythologizing the Soto tradition. The book reflects the best of Japanese scholarship."—Michel Mohr, independent scholar

"This book—well argued, well documented and filled with fascinating material—demonstrates the strengths of a social history approach to the study of Buddhist life and contributes to the field of Zen studies in a dramatic way."—Charles Hallisey, University of Wisconsin, Madison.