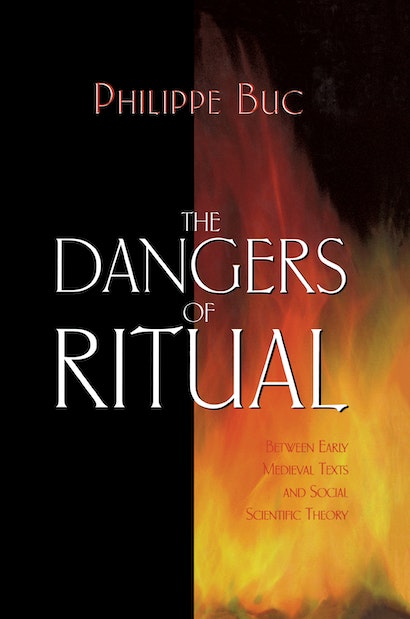 Central to current understandings of medieval history is the concept of political ritual, encompassing events from coronations to funerals, entries into cities, civic games, banquets, hunting, acts of submission or commendation, and more. ”Ritual?” asks Philippe Buc. In The Dangers of Ritual he boldly argues that the concept shouldn’t be so central after all. Modern-day scholars, gently seduced by twentieth-century theories of ritual, often misinterpret medieval documents that ostensibly describe such events, in part because they fail to appreciate the intentions behind them.

The book begins with four case studies whose arrangement — backward from texts on tenth-century kingship to fourth-century representations of Christian martyrdom — allows for the line of development to be peeled back layer by layer. It then turns to an analysis of the formation of the intellectual traditions that contemporary historians have employed to interpret medieval documents. Tracing the emergence of the concept of ritual from the Reformation to the mid-twentieth century, Buc highlights the continuities yet also the profound transformations between the early medieval understandings and our own, social-scientific models.

Medieval historians will find this book an indispensable resource for its insights into methodological issues crucial to their discipline. As Buc demonstrates, only rigorous attention to the contexts within which authors worked can allow us to reconstruct from medieval documents how ”rituals” might have functioned. Ultimately, he argues, too swift an application of contemporary models to highly complex textual artifacts blinds us to the specificities of early medieval European political culture.

"This attempt to bring medievalists into fuller awareness of the social science theories they employ but often have never studied at length is most commendable."—Choice

"Everything in this book is erudite, witty, and elegantly argued. There is nothing like The Dangers of Ritual in theme, breadth, detail, or approach. It will be commented on furiously by medieval historians."—Paul Freedman, Yale University

"This is an effective critique of what is at present a far too influential mode of historical interpretation. Buc makes his points supremely well. The book is beautifully constructed. It works, it is new, and it is important."—Rosamond McKitterick, Cambridge University