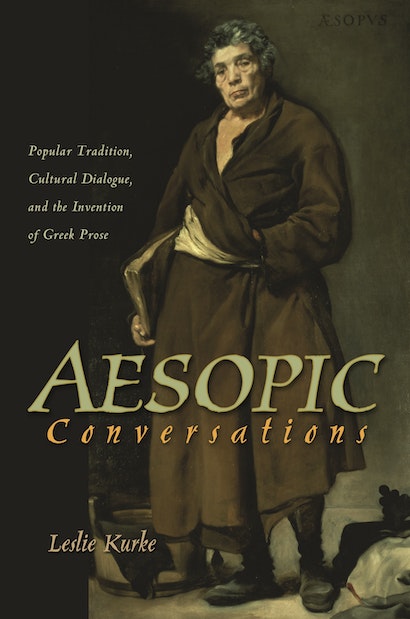 Examining the figure of Aesop and the traditions surrounding him, Aesopic Conversations offers a portrait of what Greek popular culture might have looked like in the ancient world. What has survived from the literary record of antiquity is almost entirely the product of an elite of birth, wealth, and education, limiting our access to a fuller range of voices from the ancient past. This book, however, explores the anonymous Life of Aesop and offers a different set of perspectives. Leslie Kurke argues that the traditions surrounding this strange text, when read with and against the works of Greek high culture, allow us to reconstruct an ongoing conversation of “great” and “little” traditions spanning centuries.


Evidence going back to the fifth century BCE suggests that Aesop participated in the practices of nonphilosophical wisdom (sophia) while challenging it from below, and Kurke traces Aesop’s double relation to this wisdom tradition. She also looks at the hidden influence of Aesop in early Greek mimetic or narrative prose writings, focusing particularly on the Socratic dialogues of Plato and the Histories of Herodotus. Challenging conventional accounts of the invention of Greek prose and recognizing the problematic sociopolitics of humble prose fable, Kurke provides a new approach to the beginnings of prose narrative and what would ultimately become the novel.


Delving into Aesop, his adventures, and his crafting of fables, Aesopic Conversations shows how this low, noncanonical figure was — unexpectedly — central to the construction of ancient Greek literature.

Leslie Kurke is professor of classics and comparative literature at the University of California, Berkeley. Her books include Coins, Bodies, Games, and Gold (Princeton).

"Kurke's learned and humane book aims to excavate the vibrant popular tradition assumed by Aesop's fables but now largely buried, and restore it to its place in cultural history. . . . Aesopic Conversations is a brilliant and original book, which will transform the way we read early Greek literature."—Tim Whitmarsh, London Review of Books

"There are large ideas in this book. Critical faculties will be honed by reading it."—Vivienne Gray, Bryn Mawr Classical Review

"With her keen eye for symbolic expressions of ideological conflict, Kurke has thrust Aesop into the center of major political, philosophical and literary developments of the fifth and fourth centuries. Precisely because of its ambitions, many of the claims this book makes want weighing. But let it be said that if Kurke sometimes pushes the evidence, she never forces it, and she always gives space to alternative views in substantial footnotes."—Andrew Ford, International Journal of the Classical Tradition

"[Kurke] consistently succeeds in keeping the main lines of her argument clearly in view. Cumulatively her discussion is both rich and persuasive and often quite witty. The Aesop who emerges is altogether a much more complex, influential, and interesting figure than the homespun rustic narrator of 'Aesop's fables.'"—Andrew Szegedy-Maszak, New England Classical Journal

"[A] thoughtful and thought-provoking discussion, here and throughout the book: Kurke makes us look anew at familiar texts, and that is what literary criticism is for."—John Taylor, Anglo-Hellenic Review

"Kurke's . . . approach to the text(s) of the Life of Aesop [is] groundbreaking and sophisticated. While there have been a number of valuable studies of the Life of Aesop in recent decades, few have attempted to grapple in earnest with the specific challenges posed by its anonymity, textual multiplicity, and popular character."—Jeremy B. Lefkowitz, Phoenix

"Kurke's is a very distinctive voice. Her scholarship is always trenchant, thoughtful, and articulate. Her argument is clear, even when intricate and extended, and it has no Aesopic aggressions or sleights of hand. . . . There is much to admire and enjoy here."—Simon Goldhill, Classical World

"Leslie Kurke is one of the sharpest and most original scholars of ancient Greek literary culture writing today. Informed, intellectually precise, and always engaged, her work has long been a pleasure and an education. Here she brings all of her considerable theoretical experience to the life and work of that least refined of ancient authors: Aesop. A hick, a foreigner, a slave, Aesop speaks with no kind of authority and yet by all accounts he is wise. Kurke takes this central conundrum as the starting point for a wide-ranging exploration of what it means in ancient Greek culture to be highbrow or lowbrow, gold or dross. Along the way there are some surprising diversions, numerous clever insights, and quite a lot of sophisticated and not so sophisticated fun."—James Davidson, University of Warwick

Aesopic Conversations is a masterpiece. Breathtakingly original, the book illuminates the dynamics of the Aesopic tradition and the intellectual history of Greece. It succeeds in showing that the seemingly marginal figure of Aesop, a fable-telling alleged criminal and itinerant slave, had a central role in the invention of a fundamental medium for all of Western history—serious nonfictional prose."—Richard P. Martin, Stanford University