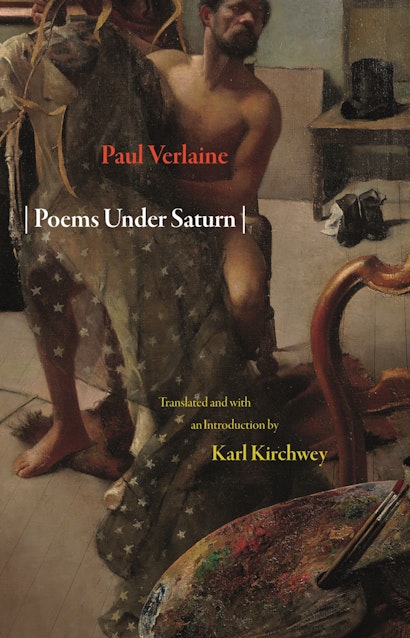 Poems Under Saturn is the first complete English translation of the collection that announced Paul Verlaine (1844-1896) as a poet of promise and originality, one who would come to be regarded as one of the greatest of nineteenth-century writers. This new translation, by respected contemporary poet Karl Kirchwey, faithfully renders the collection’s heady mix of classical learning and earthy sensuality in poems whose rhythm and rhyme represent one of the supreme accomplishments of French verse. Restoring frequently anthologized poems to the context in which they originally appeared, Poems Under Saturn testifies to the blazing talents for which Verlaine is celebrated.

Poems Under Saturn presents the extraordinary devotion and intense musicality of an artist for whom poetry remained the one true passion.

Karl Kirchwey is professor of the arts and director of the Creative Writing Program at Bryn Mawr College, and, from 2010-2013, the Andrew Heiskell Arts Director at the American Academy in Rome. For many years he was director of the 92nd Street Y Unterberg Poetry Center in New York City. His six books of poetry include The Happiness of This World and Mount Lebanon.

"Although this line occurred in Verlaine's third book, Rimbaud may well have also have been familiar with the first, 'Poemes saturniens,' or 'Poems Under Saturn,' which was published in 1866 and has recently appeared in a deftly rhymed and metered new translation by Karl Kirchwey that offers it for the first time in English as an integral volume."—Lydia Davis, New York Times Book Review

"Karl Kirchwey achieves some masterful effects in his translation of Verlaine's large collection Poems Under Saturn. . . . Kirchwey can be wonderfully accurate in rendering the meaning of Verlaine's words and is very sensitive to the rhythm of the lines. His translation of the final stanza of 'Evening Star' is remarkable: The barn owls awaken and, silent/Oar the black air with their heavy wings/And the zenith fills with dull glimmerings./Pale Venus rises, and it is night. Using 'oar' as a verb is a touch of genius and enlivens the verse."—New York Review of Books

"Karl Kirchwey's translations of early Verlaine are true to the emotional coloring and musicality of the originals, their Baudelairean ambiguities of feeling, their exciting mixture of dictions. 'Classic Walpurgisnacht' is one of many renderings which seem to me masterly."—Richard Wilbur, author of Collected Poems, 1943-2004

"Beautifully attentive to Verlaine's moods and melodies, Kirchwey catches the harmonies and dissonances, the tenderness, bile, and rage, of Verlaine's astonishing first book of poems. With its learned introduction and notes, this translation is a work of art of the first order: a perfect introduction to the young Verlaine for readers who do not know French, and a graceful meditation on Verlaine's poetics for readers who have long known and loved the poems in the original."—Rosanna Warren, author of Departure: Poems

"In these Poems Under Saturn, Verlaine's early 'self I was then' springs out strangely and inventively. Yet they feel like now."—Mary Ann Caws, editor of The Yale Anthology of Twentieth-Century French Poetry

"This is a historical event in the translation of lyric verse—the first valuable English version of Paul Verlaine's first and best book."—Richard Howard, author of Inner Voices: Selected Poems, 1963-2003

"Attentive both to precise and shaded meanings, Kirchwey's careful translations find the true Verlaine in verse respectful of the original rhyme schemes."—Martin Sorrell, University of Exeter