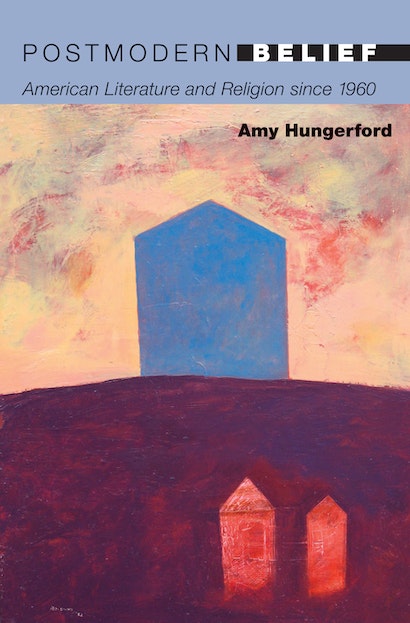 How can intense religious beliefs coexist with pluralism in America today? Examining the role of the religious imagination in contemporary religious practice and in some of the best-known works of American literature from the past fifty years, Postmodern Belief shows how belief for its own sake — a belief absent of doctrine — has become an answer to pluralism in a secular age. Amy Hungerford reveals how imaginative literature and religious practices together allow novelists, poets, and critics to express the formal elements of language in transcendent terms, conferring upon words a religious value independent of meaning.


Hungerford explores the work of major American writers, including Allen Ginsberg, Don DeLillo, Cormac McCarthy, Toni Morrison, and Marilynne Robinson, and links their unique visions to the religious worlds they touch. She illustrates how Ginsberg’s chant-infused 1960s poetry echoes the tongue-speaking of Charismatic Christians, how DeLillo reimagines the novel and the Latin Mass, why McCarthy’s prose imitates the Bible, and why Morrison’s fiction needs the supernatural. Uncovering how literature and religion conceive of a world where religious belief can escape confrontations with other worldviews, Hungerford corrects recent efforts to discard the importance of belief in understanding religious life, and argues that belief in belief itself can transform secular reading and writing into a religious act.


Honoring the ways in which people talk about and practice religion, Postmodern Belief highlights the claims of the religious imagination in twentieth-century American culture.

Amy Hungerford is professor of English at Yale University. She is the author of The Holocaust of Texts: Genocide, Literature, and Personification.

"Hungerford's text is for scholars of contemporary literature and contemporary religion; for readers concerned about the relevance of literary texts and their continued ability to inform our lives; and for readers pursuing the meaning of religious belief in a postmodern world. Her work is richly researched and interdisciplinary, moving deftly between religious history and literary theory. Her reframing of belief is both creative and capacious, reaffirming the ability of literature to convey meaning in an allegedly postliterary age."—Kristina K. Groover, Modern Philology

"This is an intelligent, compelling, and beautifully-written book about the place of belief in contemporary American literature and culture. The eclectic mix of authors is gratifying, and each one is exhaustively researched."—Christopher Douglas, University of Victoria

"Hungerford bravely takes on one of the great unanswered questions of contemporary literary criticism: what are we to do with the sacred? Her readings of literary texts are persuasive and powerful, and she pursues her case with subtlety, tenacity and elegance. This strong book is contrarian to its core—I really know nothing like it out there."—Jonathan Freedman, University of Michigan