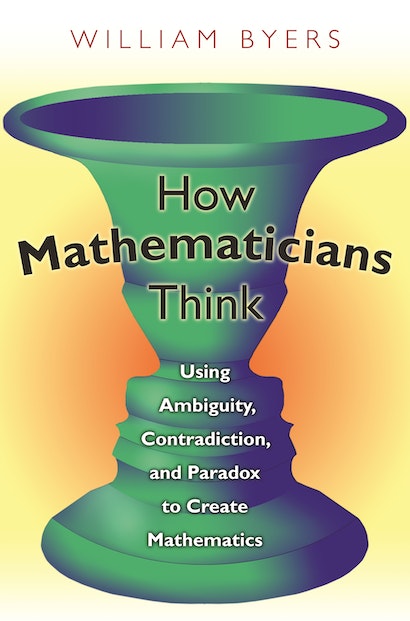 To many outsiders, mathematicians appear to think like computers, grimly grinding away with a strict formal logic and moving methodically — even algorithmically — from one black-and-white deduction to another. Yet mathematicians often describe their most important breakthroughs as creative, intuitive responses to ambiguity, contradiction, and paradox. A unique examination of this less-familiar aspect of mathematics, How Mathematicians Think reveals that mathematics is a profoundly creative activity and not just a body of formalized rules and results.


Nonlogical qualities, William Byers shows, play an essential role in mathematics. Ambiguities, contradictions, and paradoxes can arise when ideas developed in different contexts come into contact. Uncertainties and conflicts do not impede but rather spur the development of mathematics. Creativity often means bringing apparently incompatible perspectives together as complementary aspects of a new, more subtle theory. The secret of mathematics is not to be found only in its logical structure.


Ultimately, How Mathematicians Think shows that the nature of mathematical thinking can teach us a great deal about the human condition itself.

William Byers is professor of mathematics at Concordia University in Montreal. He has published widely in mathematics journals.

"Ambitious, accessible and provocative...[In] How Mathematicians Think, William Byers argues that the core ingredients of mathematics are not numbers, structure, patterns or proofs, but ideas...Byers' view springs from the various facets of his career as a researcher and administrator (and, he says, his interest in Zen Buddhism). But it is his experience as a teacher that gives the book some of its extraordinary salience and authority...Good mathematics teaching should not banish ambiguity, but enable students to master it...Everyone should read Byers...His lively and important book establishes a framework and vocabulary to discuss doing, learning, and teaching mathematics, and why it matters."—Donal O'Shea, Nature

"From Byers's book, if you work at it, you will learn some mathematics and, more important, you may begin to see how mathematicians think."—Peter Cameron, Times Higher Education Supplement

"As William Byers points out in this courageous book, mathematics today is obsessed with rigor, and this actually suppresses creativity.... Perfectly formalized ideas are dead, while ambiguous, paradoxical ideas are pregnant with possibilities and lead us in new directions: they guide us to new viewpoints, new truths.... Bravo, Professor Byers, and my compliments to Princeton University Press for publishing this book."—Gregory Chaitin, New Scientist

"Many people assume that mathematicians' thinking processes are strictly methodical and algorithmic. Integrating his experience as a mathematician and as a Buddhist, Byers examines the validity of this assumption. Much of mathematical thought is based on intuition and is in fact outside the realm of black-and-white logic, he asserts. Byers introduces and defines terms such as mathematical ambiguity, contradiction, and paradox and demonstrates how creative ideas emerge out of them. He gives as examples some of the seminal ideas that arose in this manner, such as the resolution of the most famous mathematical problem of all time, the Fermat conjecture. Next, he takes a philosophical look at mathematics, pondering the ambiguity that he believes lies at its heart. Finally, he asks whether the computer accurately models how math is performed. The author provides a concept-laden look at the human face of mathematics."—Science News

"This book is a radically new account of mathematical discourse and mathematical thinking...What Byers's book reveals is that ambiguity is always present...You can't quite say that nobody has said this before. But nobody has said it before in this all-encompassing, coherent way, and in this readable, crystal clear style...This book strikes me as profound, unpretentious, and courageous."—Reuben Hersh, Notices of the AMS

"This is a truly exceptional work. In an almost gripping tour de force, Byers examines the creative impulse of mathematics, which to him is the notion of ambiguity, understood to 'involve a single idea that is perceived in two self-consistent but mutually incompatible frames of reference'...[I]t is a sorely needed complement to often-formulaic textbooks.... An incredible book."—J. Mayer, Choice

"William Byers...has written a passionate defense of the uniquely human aspect of mathematics...Byers [demonstrates] that the insights of mathematicians come about through a discipline that...has something in common with Zen practice. First, there is a positive use of difficulty: 'the paradox has the enormous value of highlighting a fertile area of thought.' Then the breakthrough: 'An idea emerges in response to the tension that results from the conflict inherent in ambiguity.' These sentences from Byers's book apply equally to scientific and spiritual work."—Eliot Fintushel, Tricycle

"After a lifetime of research and teaching, [Byers argues] that mathematical breakthroughs do not come from simply manipulating symbols according to strict rules. Byers writes with verve and clarity about deep and difficult mathematical and philosophical issues such as the relationship between great mathematical ideas and cultural crises. Byers discusses in depth some examples of great ideas and crises...and explains why he is dead against seeing the mind as a computer."—Andrew Robinson, Physics World

"It is a pleasure to read [Byers'] well written, carefully referenced, and clearly illustrated arguments. Byers describes what 'doing math is: a process characterized by the complementary poles of proof and idea, of ambiguity and logic.' Byers' book has given me a greater appreciation for mathematics. I recommend it to anyone interested in, and open-minded about, the attempt to define mathematics."—Lee Kennard, Math Horizons

"Byers subverts the widely held notion that mathematicians are a form of computer, or robotic followers of unbending rules. In his view, thinking about math requires creativity and the use of non-logical forms of thought. Thus the ambiguity, paradox and contradiction of the subtitle."—The Globe and Mail

"Well-organized and carefully written the present book is very useful to all who are interested in How Mathematicians Think!"—Ioan A. Rus, Mathematica

"[A] brilliant and easily accessible book on the creative foundations of math and psychology."—Ernest Rossi, Psychological Perspectives

"What does one like to learn when one reads a book? Because the reading of a book is a union between its text and the reader's consciousness, one answer is the wedding custom of 'something old, something new, something borrowed, something blue'. All are there in this book. . . . It is a useful book for the apprentice mathematician by clarifying the importance of boldness in making mistakes and declaring that one does not fully understand some technical details which at first sight appear to be more complex than they really are."—Bob Anderssen, Australian Mathematical Society Gazette

"[Byers'] book helps us not to eliminate the myths surrounding mathematics and mathematicians, but to master them."—David Cohen, European Legacy

"The author is a mathematician, and he plainly knows what he is talking about. In my opinion he has done a good job of getting it across. . . . The book has a lot of worthwhile material to recommend."—Robert Thomas, Philosophia Mathematica

"Ultimately, How Mathematicians Think shows that the nature of mathematical thinking can teach us a great deal about the human condition itself."—World Book Industry

"Byers gives a compelling presentation of mathematical thinking where ambiguity, contradiction, and paradox, rather than being eliminated, play a central creative role."—David Ruelle, author of Chance and Chaos

"This is an important book, one that should cause an epoch-making change in the way we think about mathematics. While mathematics is often presented as an immutable, absolute science in which theorems can be proved for all time in a platonic sense, here we see the creative, human aspect of mathematics and its paradoxes and conflicts. This has all the hallmarks of a must-read book."—David Tall, coauthor of Algebraic Number Theory and Fermat's Last Theorem

"I strongly recommend this book. The discussions of mathematical ambiguity, contradiction, and paradox are excellent. In addition to mathematics, the book draws on other sciences, as well as philosophy, literature, and history. The historical discussions are particularly interesting and are woven into the mathematics."—Joseph Auslander, Professor Emeritus, University of Maryland