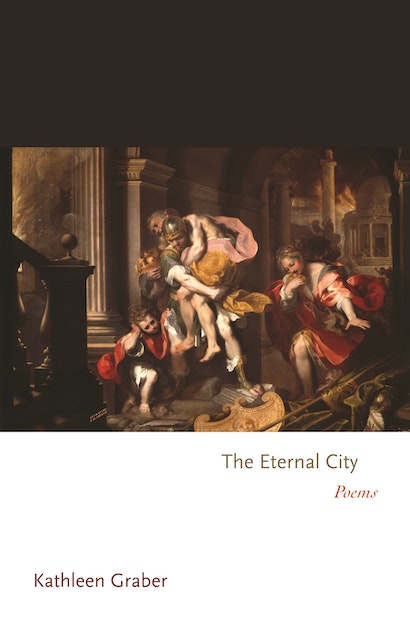 With an epigraph from Freud comparing the mind to a landscape in which all that ever was still persists, The Eternal City offers eloquent testimony to the struggle to make sense of the present through conversation with the past. Questioning what it means to possess and to be possessed by objects and technologies, Kathleen Graber’s award-winning second collection of poetry brings together the elevated and the quotidian to make neighbors of Marcus Aurelius, Klaus Kinski, Walter Benjamin, and Johnny Depp. Like Aeneas, who escapes Troy carrying his father on his back, the speaker of these intellectually and emotionally ambitious poems juggles the weight of private and public history as she is transformed from settled resident to pilgrim.

In Dialogue with Kathleen Graber and Eleanor Wilner: The ethical aspirations of poetry

Kathleen Graber teaches in the Creative Writing Program at Virginia Commonwealth University. She is the author of The River Twice (Princeton) and Correspondence and her poems have appeared in the New Yorker and the American Poetry Review, among other publications.

"Graber is one of the most interesting, slippery and philosophical new poets to come along in a while. . . . What makes Graber's poems so fresh and wild are the associative slips that happen between the distant past and the urgent present."—Publishers Weekly

"Nothing short of a revelation. Graber is a new poet that we should have always had but didn't until just now. Graber is the kind of poet who thinks out loud, though not in the tricky, needley way of John Ashbery, but like someone very smart and very well-read trying to get to the bottom of every troubling and exciting thought. She thinks about her day to day life, family and friends, their every day goings on, their deaths and big tragedies, and she thinks about big ideas—life, death, meaning—mostly in the same poem. She name-checks some of the big figures of Western thought—Marcus Aurelius and Walter Benjamin, for instance—but does so as if she were talking to or about friends. She manages to do a scholar's work in these poems without the alienating haughtiness of many scholars. And despite their learned-ness, these are poems anyone could love. . . . If you only read one book of poetry this year, that's not enough, but start with this one."—Craig Morgan Teicher, Publishers Weekly

"Graber's book—this is her second—is one of the few to come out in 2010 that has joined the little clutch I have of poetry books I read and reread. It's an unusually wise and sturdy book for a poet whose career is so young. . . . Graber isn't a formal innovator, nor is her subject matter—family, love, friendship, death, and the great books of classical literature—new to poetry, but she is nonetheless an absolute original. . . . Which is not to say she is by any means a grandiose poet. She's more of a very smart friend. Her problems are common—how to get along with others, how to make everyday love last and/or hurt less, how to have fun in the midst of a typically difficult life—and her poems offer, if not solutions (for there really are no solutions, are there?), company, and really good reading."—Craig Morgan Teicher, National Book Critics Circle board member

"A really unusual, engaging second book. Graber writes philosophical, meditative poems in a diction that's strangely natural and conversational; one poem is occasioned by leaving her keys in the apartment complex laundry room and locking herself out, another by rereading Walter Benjamin. The effect is of eavesdropping on the neurotic yet rigorous mind of an admired friend—the kind of unpretentious person who genuinely turns to books for solace. Her long-lined work grapples with loss, illness, and transience, allowing itself to be highly personal while never losing sight of the larger context of loss: the human condition. It's serious poetry as inviting as an intimate conversation. See for yourself."—Meghan O'Rourke, NPR

"Graber, who draws on philosophy and theology, knows how to juxtapose large ideas with small moments. . . . Her careful balancing and sensitive descriptions often feel as refreshing as a cold drink on a hot summer day. That's especially true with the heart of this collection, 12 interlocking poems that begin with quotations from Marcus Aurelius. . . . This series demonstrates why ancient ideas are relevant today, and why Graber deserves to be in the company of such accomplished poets."—Elizabeth Lund, Washington Post

"In Graber's poems, past, present, and future states of mind are coexistent with real and imagined worlds. This adds complex layering to her elegant and well-crafted long lines. . . . Shape-shifting and particularity-making, Graber's themes encompass a vast array of subjects, from religious iconography to graffiti to placards of state bureaucracy, yet in her skillful hands, the images cohere and we travel with her, those 285 steps of the Siegessaule. . . . A brilliant new voice is calling out from these exquisitely drawn verses."—Losana Boyd, First Things

"[An] outstanding collection. . . . These poems are like cherishable letters from a friend abroad. . . . Graber reminds one that poetry can be the most liberating form. . . . Kathleen Graber is mistress of these graceful inquisitions—and agile cadences. Her wings are unclipped. She convinces as a poet who has the freedom of the city—of the eternal city."—Kate Kellaway, The Observer

"Secretary of unwhispered announcements, Kathleen Graber traces the outlines of meaning with a sure, deliberate hand. Her engaging ruminations merge forms: diary, letter, and essay. In this second collection, she extends her reputation as a poet of 'beauty and deeply felt intelligence.' Graber holds the hammer of time at both ends, beating out ideas into images and conversely, images into ideas. History and memory course through the pages, reintegrated into the present by insightful observations. . . . 'Loneliness, the one defendable empire,' never looked better."—Jeffrey Cyphers Wright, Brooklyn Rail

"Kathleen Graber's aptly titled second collection of poetry, The Eternal City, questions the reality and logic of what it means to communicate with the past, present, and future. From the first poem until the last she is in conversation with 'the eternal,' but more specifically with human interaction and thinking that jumps back and forth on an infinite timeline. This trope is one of the most successful, and intriguing, threads throughout her book. . . . The underlying success here is that Graber takes unrelated texts and persons and intricately weaves them together with forceful language and aesthetic resonance."—Lana Rakhman, TriQuarterly

"Through sheer persistence I'll find a book in which almost every poem makes me fall down, so dizzied am I by the world spinning and resolving itself in new ways. Such is the experience I had with Kathleen Graber's The Eternal City. . . . The book is barely able to contain these thought-full poems that spool outward into the world around the poet, both the world of the world and the world of the mind, and curl back on themselves."—Marilyn McCabe, ConnotationPress.com