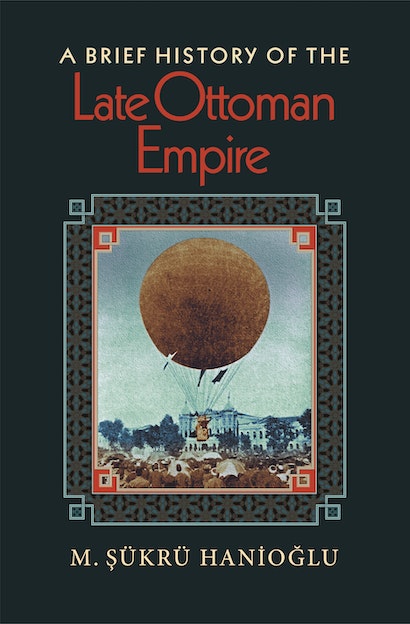 At the turn of the nineteenth century, the Ottoman Empire straddled three continents and encompassed extraordinary ethnic and cultural diversity among the estimated thirty million people living within its borders. It was perhaps the most cosmopolitan state in the world — and possibly the most volatile. A Brief History of the Late Ottoman Empire now gives scholars and general readers a concise history of the late empire between 1789 and 1918, turbulent years marked by incredible social change.


Moving past standard treatments of the subject, M. Sükrü Hanioglu emphasizes broad historical trends and processes more than single events. He examines the imperial struggle to centralize amid powerful opposition from local rulers, nationalist and other groups, and foreign powers. He looks closely at the socioeconomic changes this struggle wrought and addresses the Ottoman response to the challenges of modernity. Hanioglu shows how this history is not only essential to comprehending modern Turkey, but is integral to the histories of Europe and the world. He brings Ottoman society marvelously to life in all its facets — cultural, diplomatic, intellectual, literary, military, and political — and he mines imperial archives and other documents from the period to describe it as it actually was, not as it has been portrayed in postimperial nationalist narratives. A Brief History of the Late Ottoman Empire is a must-read for anyone seeking to understand the legacy left in this empire’s ruins — a legacy the world still grapples with today.

M. Sükrü Hanioğlu is the Garrett Professor in Foreign Affairs and professor of Near Eastern studies at Princeton University. He is the author of Preparation for a Revolution and The Young Turks in Opposition.

"There are many fine insights in this short book. It is no surprise that many relate to political hypocrisy, since Hanioglu is well known for his studies of the Young Turk political movement. But he also offers often-illuminating discussions of cultural changes, mainly those of the Ottoman official and middle strata."—Choice

"[T]his book raises a series of new questions and calls for developing new approaches and ideas to analyze the last Ottoman century and understand better the rise of national states in the Balkans and the Middle East, especially Turkey. . . . In short, this is a thought-provoking book and I recommend it highly."—Kemal H. Karpat, American Historical Review

"Forgoing 'the worn-out paradigms of modernization and Westernization,' Hanioglu opts instead for a consideration of Ottoman responses to the challenge of modernity. . . . [This book] is a pleasure to read."—Kate Fleet, Journal of Islamic Studies

"The Ottoman Empire was the longest-lived regional regime in the Middle East since antiquity; it was also the most recent, and left enduring traces. Şükrü Hanioğlu's A Brief History of the Late Ottoman Empire is a major contribution to the better understanding of the region. His account is based on intimate knowledge of the Ottoman archives, as well as of many other sources, both internal and external. Concerned with trends more than events, this book illuminates the ideas and movements that shaped the course of history."—Bernard Lewis, Middle East Strategy at Harvard

"This timely history is a must-read for anyone seeking to understand the legacy left in the ruins of the empire—a legacy the world still grapples with today."—Turkish Daily News

"A Brief History of the Late Ottoman Empire is a must-read for anyone seeking to understand the legacy left in this empire's ruins—a legacy the world still grapples with today."—Spartacus Educational

"A Brief History of the Late Ottoman Empire deserves only unqualified praise. It is well written and comprehensive in its coverage—with diplomatic, economic and intellectual history interacting."—Peter Clark, Asian Affairs

"In all, this is a fine effort well worth reading for its valuable background to WWI, to the politics of modern Turkey and the other Ottoman successor states. Its maps are particularly useful."—Len Shurtleff, Listening Post

"[T]o readers familiar with the Ottoman Empire through the Balkans, A Brief History of the Late Ottoman Empire is especially commendable as a fresh introduction to a bygone view from Istanbul."—Seth C. Elder, Balkanalysis

"Hanioglu's seminal work presents a true spring of ideas not only for the late Ottoman history but also for the search of some earlier East Roman and Byzantine interplays of structures and identities."—Wolfgang G. Schwanitz, Sehepunkte

"A Brief History of the Late Ottoman Empire is a recommendable book to the specialist and novice alike. It would also appeal to public readership as a fine sample of international history."—Nur Bilge Criss, Turkish Studies

"The strength of A Brief History of the Late Ottoman Empire is its view of the late Ottoman Empire both from the imperial inside as well as from a reflective and inspiring historical distance. This concise book is very appropriate for general history classes."—Hans-Lukas Kieser, H-Net Reviews

"Without a doubt or reservation, this brief history is must reading for scholars and students of Ottoman history, and the author is to be commended for his excellent approach to the study of this period, for this reviewer cannot think of any other scholar better equipped intellectually to analyze and place it in the proper perspective for a meaningful understanding of this critical phase of an empire on the verge of disintegration."—Caesar E. Farah, Historian

"Historians and general readers embarking on an introduction to the Ottoman Empire could do far worse than to start with M. Sükrü Hanioğlu's A Brief History of the Late Ottoman Empire. Concise, well-written, and narrative, it nonetheless successfully revises decades of misconceptions about the Ottoman Empire, creating a new model for our understanding of this long-lived system. The author presents several key arguments worth presenting. He encourages his readers to move beyond previous interpretations of Ottoman history, including the perception of the empire as a decrepit and dynastic straitjacket for nationalisms."—Wayne H. Bowen, Canadian Journal of History

"A significant contribution, not only to the historiography of the late Ottoman Empire but also to the field of comparative studies of empires."—Fikret Adanir, coeditor of The Ottomans and the Balkans