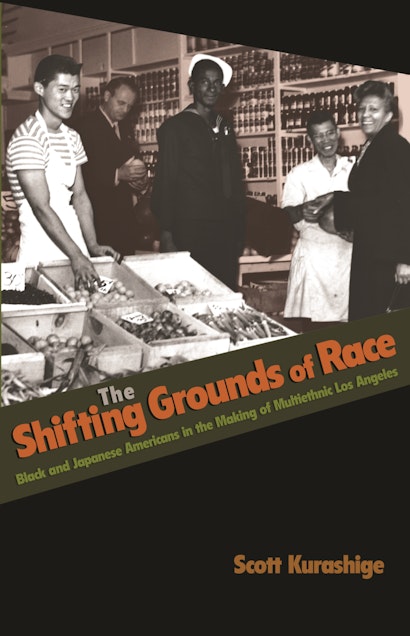 Los Angeles has attracted intense attention as a “world city” characterized by multiculturalism and globalization. Yet, little is known about the historical transformation of a place whose leaders proudly proclaimed themselves white supremacists less than a century ago. In The Shifting Grounds of Race, Scott Kurashige highlights the role African Americans and Japanese Americans played in the social and political struggles that remade twentieth-century Los Angeles.


Linking paradigmatic events like Japanese American internment and the Black civil rights movement, Kurashige transcends the usual “black/white” dichotomy to explore the multiethnic dimensions of segregation and integration. Racism and sprawl shaped the dominant image of Los Angeles as a “white city.” But they simultaneously fostered a shared oppositional consciousness among Black and Japanese Americans living as neighbors within diverse urban communities.


Kurashige demonstrates why African Americans and Japanese Americans joined forces in the battle against discrimination and why the trajectories of the two groups diverged. Connecting local developments to national and international concerns, he reveals how critical shifts in postwar politics were shaped by a multiracial discourse that promoted the acceptance of Japanese Americans as a “model minority” while binding African Americans to the social ills underlying the 1965 Watts Rebellion. Multicultural Los Angeles ultimately encompassed both the new prosperity arising from transpacific commerce and the enduring problem of race and class divisions.


This extraordinarily ambitious book adds new depth and complexity to our understanding of the “urban crisis” and offers a window into America’s multiethnic future.

Scott Kurashige is associate professor of history, American culture, and Asian/Pacific Islander American studies at the University of Michigan.

"During 'the white years' in LA history, you might think Asian immigrant groups and black migrants from the South lived in separate worlds. The truth is more complicated: sometimes they were pitted against each other, sometimes they fought—and sometimes they joined forces. . . . Those competitions and alliances are the subject of Scott Kurashige's fascinating and important new book."—Jon Wiener, The Nation

"Scott Kurashige's impressive investigation of the interactions between Japanese Americans and African Americans in mid-twentieth-century Los Angeles covers a tremendous amount of historical ground. . . . Clearly, there are stories still to be told here, but we are fortunate that Kurashige has given us an insightful and wide-ranging investigation into how leaders of two subaltern communities navigated the dangerous waters of race in a twentieth-century American city."—Jeremiah B. C. Axelrod, Journal of American History

"The . . . book . . . is clearly written and enjoyable—and merits the attention of those interested in the history of Los Angeles, the West, and black and Japanese Americans."—Shana Bernstein, Southern California Quarterly

"Scott Kurashige's fine study advances the creation of a fully multi-cultural American history. . . . On a personal note, as a Japanese American from the Crenshaw district, this reviewer found Shifting Grounds to be consistently enlightening about familiar individuals, organizations, and events, both Japanese American and African American."—Dean S. Toji, California History

"Shifting Grounds is a refreshing new look at race relations in Southern California and is not bogged down with academic lingo, making it an easy read for the general public."—Martha Nakagawa, Nichi Bei Times

"Kurashige has ventured into uncharted territory and deserves much praise and applause for advancing our understanding of one of the most important, but often overlooked, cities in American history."—John Putman, Reviews in American History

"The Shifting Grounds of Race is a carefully researched comparative work that makes a significant contribution to the scholarship of immigration, race relations, and urbanization."—Allison Varzally, Pacific Historical Review

"Set in 20th century Los Angeles, Scott Kurashige offers a sweeping historical narrative that allows the reader to experience, as the book is titled, 'the shifting grounds of race'. . . . It promises to become a benchmark for future scholarship in comparative race and ethnic relations and U.S. urban history."—Yuichiro Onishi, Journal of African American History

"Scott Kurashige has written a book of major importance in American urban history. . . . Kurashige's central and singular strength comes from his intimate knowledge of the communities and neighborhoods he writes about. . . . In addition to the broader history of Los Angeles, Kurashige has made a valuable contribution to the history of Japanese Americans by documenting the urban story of internment during World War II. In doing so, he presents an unprecedented level of detail and richness behind individuals and institutions that mobilized for and against internment."—Edward J. W. Park, Journal of Public and International Affairs

"Based on an extraordinary range of sources and addressing multiple fields of study, The Shifting Grounds of Race reveals cogently the promises and limitations of anti-racist struggles of the past and the interpretive and political possibilities of what Kurashige calls 'multiethnic history.' . . . Kurashige's original framework—the triangulated racialization of whites, blacks, and Japanese Americans over many decades—and meticulous social histories of Black and Japanese Angelenos identify and demystify the many overlapping dialectics of race find class in shaping the twentieth century and beyond."—Moon-Ho Jung, Western Historical Quarterly

"The Shifting Grounds of Race is . . . a provocative, fascinating read. It convincingly argues that the political strategies adopted by African Americans and Japanese Americans were profoundly shaped by broader political, organizational and economic factors. It also injects Japanese Americans, and Nissei in particular, squarely into the history of Los Angeles. Kurashige's emphasis on Japanese Americans adds another important layer to our understanding of racial politics and urbanization in the United States."—Daisy Rooks, Against the Current

"Scott Kurashige's book . . . [is] based on impressive historical scholarship, and I can recommend [it] as a fascinating read."—David O. Sears, Perspectives on Politics

"Kurashige's book is still a work that deserves careful reading and wide application in our own research and classrooms."—Chris Friday, American Historical Review

"Kurashige is to be commended for taking on the politically laden concept of multiculturalism and digging under it to show us the shifting grounds of racial politics and doing so in a way that is both specific to Los Angeles but with clear, far reaching implications for American class and ethnic relations. As such, this book is not an exercise in geographic determinism but a complex intervention into the agonizing social and political history of integration and race formation in the United States."—Sarah Schrank, Journal of Social History

"By underscoring the interactions and histories of multiple communities, this remarkable book diversifies and problematizes readers' understanding of race relations and offers a glimpse into America's multiracial future. This reviewer highly recommends it."—Matthew C. Whitaker, The Historian

"Scott Kurashige shifts the urban history paradigm in this brilliantly triangulated account of African American and Japanese American resistance to white racism in Los Angeles."—Mike Davis, author of Planet of Slums and In Praise of Barbarians

"Long in historical reach, this compelling study displays a sure grasp of Asian American and African American urban histories as well as an ability to locate race in urban space, mapping political and economic inequalities in all of their human dimensions. It succeeds mightily at capturing possibility and tragedy in Los Angeles history."—David Roediger, University of Illinois

"By offering a comparative and relational history of African Americans and Japanese Americans in Los Angeles and their respective struggles against racial segregation, Scott Kurashige extends our historical knowledge about race relations and civil rights to the West. Indeed, he shows just how many of the multiracial questions that vex us today were prefigured in Los Angeles in the early and middle twentieth century."—Mae Ngai, author of Impossible Subjects