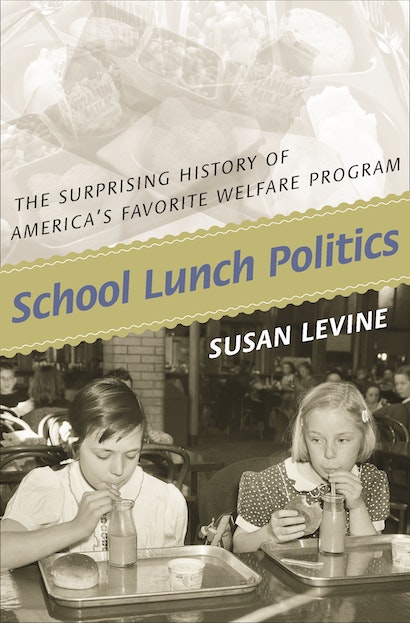 Whether kids love or hate the food served there, the American school lunchroom is the stage for one of the most popular yet flawed social welfare programs in our nation’s history. School Lunch Politics covers this complex and fascinating part of American culture, from its origins in early twentieth-century nutrition science, through the establishment of the National School Lunch Program in 1946, to the transformation of school meals into a poverty program during the 1970s and 1980s. Susan Levine investigates the politics and culture of food; most specifically, who decides what American children should be eating, what policies develop from those decisions, and how these policies might be better implemented.


Even now, the school lunch program remains problematic, a juggling act between modern beliefs about food, nutrition science, and public welfare. Levine points to the program menus’ dependence on agricultural surplus commodities more than on children’s nutritional needs, and she discusses the political policy barriers that have limited the number of children receiving meals and which children were served. But she also shows why the school lunch program has outlasted almost every other twentieth-century federal welfare initiative. In the midst of privatization, federal budget cuts, and suspect nutritional guidelines where even ketchup might be categorized as a vegetable, the program remains popular and feeds children who would otherwise go hungry.


As politicians and the media talk about a national obesity epidemic, School Lunch Politics is a timely arrival to the food policy debates shaping American health, welfare, and equality.

Susan Levine is professor of history at the University of Illinois at Chicago. She is the author of Labor's True Woman and Degrees of Equality.

"A comprehensive examination of school lunches' complex history from the birth of home economics and food as a nutritional science to the arrival of vending machines in cafeterias."—Eliza Krigman, The Nation

"[T]his book is an admirable history of the political landscape of school lunch, setting the stage for future scholarship on this rich and intriguing topic. . . . Levine's book is a fine study of the history of school lunch vis-a-vis welfare programs and politics."—Amy Bentley, American Historical Review

"[Susan Levine] traces the [school lunch] program back to the Progressive Era, when localized charities distributed school lunches as a way to counteract malnutrition. But over the course of the program's lifetime, the interests of the agricultural and commercial food industries have largely superseded those of students. Levine provides an in-depth look at how such factors as early nutritionists' disdain for Italian cooking have led to the ubiquitous greasy pizza of today's school cafeteria."—Education Week

"Levine chronicles the history of what she describes as the most popular—yet flawed and poorly understood—social welfare program in the US: The National School Lunch Program. . . . While studies in the politics of food have become popular in the last decade, as have studies of welfare, Levine's work stands out for linking these two areas of inquiry."—M. J. Garrison, Choice

"Levine has succeeded in writing the rare policy history that is also a page turner. Her engaging and at times witty prose tells a story of food science, agricultural surplus, gender, race, and the welfare state. She puts a human face on the policy makers in this story, if not the recipients of free lunches."—Meghan K. Winchell, Reviews in American History

"Susan Levine's highly readable and politically astute history of the school lunch program explains why things have not worked out as well for that program. The answer Levine provides in this book is quite sobering. Perhaps, the more people read books like Susan Levine's, the more citizens can empower themselves to push past those constraints and begin to address the fundamental inequities that persist in the U.S."—Sanford Schram, Teachers College Record

"This book is an excellent resource for FCS professionals involved in food and nutrition, as well as those interested in the early work of Ellen Richards. The illustrations and tables are helpful."—Claudia A. Engelmeier, Journal of Family & Consumer Sciences

"[G]iven Levine's thorough account of the political events that shaped the century-long history of American school lunch programs, it is likely that they will find plenty of useful references as they seek to solve the dilemma Levine describes: how to serve up balanced meals with available resources, while attending to economic and racial inequalities. Above all, we are left convinced that school lunch is everyone's problem, one way or another."—Sharron Dalton, Gastronomica

"Historians of education should find it to be a provocative study that questions the role of the public school in a new and interesting way."—Jayne R. Beilke, H-Net Reviews

"With School Lunch Politics, Sue Levine has served up a rich plate on which the histories of food, public policy, childhood, and social reform come together in complicated, intermingling ways. The result is a capacious and balanced book about the elusive quest for an equitable society and a balanced meal."—Daniel Horowitz, author of The Anxieties of Affluence

"School Lunch Politics tells the fascinating history of the National School Lunch Program, which officially began in 1946 and continues to this day. This is an important book and will be valuable for many audiences. It should receive attention not only from historians (especially historians of twentieth-century social policy) but also a broader audience interested in the current obesity crisis and the commercialization of public life. Any reader of Fast Food Nation will love this book."—Robyn Muncy, University of Maryland