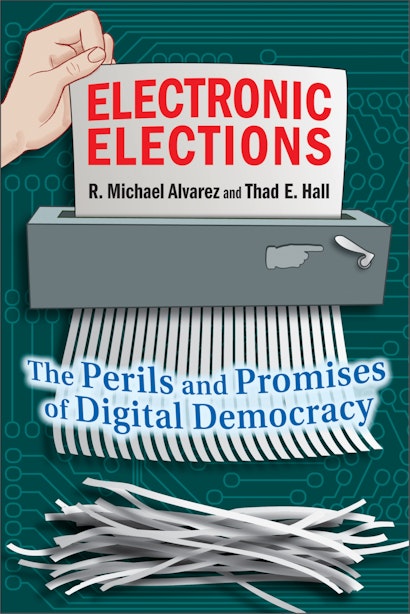 Since the 2000 presidential election, the United States has been embroiled in debates about electronic voting. Critics say the new technologies invite tampering and fraud. Advocates say they enhance the accuracy of vote counts and make casting ballots easier — and ultimately foster greater political participation. Electronic Elections cuts through the media spin to assess the advantages and risks associated with different ways of casting ballots — and shows how e-voting can be the future of American democracy.


Elections by nature are fraught with risk. Michael Alvarez and Thad Hall fully examine the range of past methods and the new technologies that have been created to try to minimize risk and accurately reflect the will of voters. Drawing upon a wealth of new data on how different kinds of electronic voting machines have performed in recent elections nationwide, they evaluate the security issues that have been the subject of so much media attention, and examine the impacts the new computer-based solutions is having on voter participation. Alvarez and Hall explain why the benefits of e-voting can outweigh the challenges, and they argue that media coverage of the new technologies has emphasized their problems while virtually ignoring their enormous potential for empowering more citizens to vote. The authors also offer ways to improve voting technologies and to develop more effective means of implementing and evaluating these systems.

Electronic Elections makes a case for how e-voting can work in the United States, showing why making it work right is essential to the future vibrancy of the democratic process.

"Electronic Elections summarizes insights [the authors] have gleaned from their extensive experience. The book is meant to instigate scientifically informed election administration. The authors argue for a comparative approach to risk management that considers the costs and benefits of alternative methods. . . . A thoughtful early contribution to a new field of election science."—Walter R. Mebane Jr., Science

"Will the machine lose your vote? Will it be hacked? Political scientists Alvarez and Hall provide a rigorous analysis of electronic voting, and they come down heavily in favor of the benefits of the new technologies, arguing that media coverage has emphasized the problems while downplaying the potential for empowering more citizens to vote."—Michelle Press, Scientific American

"This is a very important book. It will undoubtedly be cited by technologists, legislators, and advocates. The authors, carefully navigating in a politically charged field, present a documented and balanced approach to the question of electronic voting. About 70 percent of eligible Americans vote. Each of them is potentially affected by this book. There has never been a study like this one."—Michael Shamos, Carnegie Mellon University

"This book addresses a timely and important topic in election reform. The conclusions of the authors are that electronic voting systems, when evaluated correctly using risk analysis, pose fewer issues than digital scan or paper balloting systems, but that public debate has been unfortunately sidetracked into issues of fraud. This is one of the first books on this topic."—Paul Gronke, Reed College