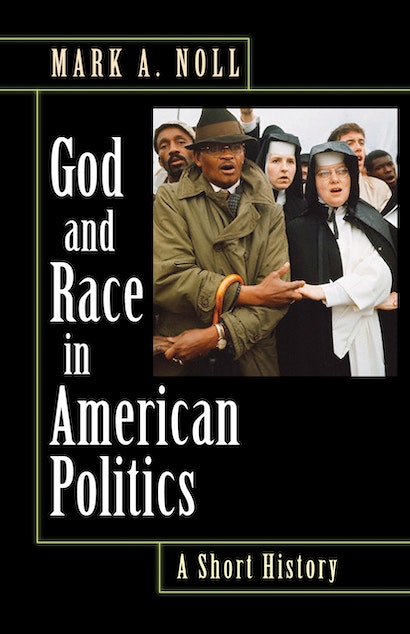 Religion has been a powerful political force throughout American history. When race enters the mix the results have been some of our greatest triumphs as a nation — and some of our most shameful failures. In this important book, Mark Noll, one of the most influential historians of American religion writing today, traces the explosive political effects of the religious intermingling with race.


Noll demonstrates how supporters and opponents of slavery and segregation drew equally on the Bible to justify the morality of their positions. He shows how a common evangelical heritage supported Jim Crow discrimination and contributed powerfully to the black theology of liberation preached by Martin Luther King Jr. In probing such connections, Noll takes readers from the 1830 slave revolt of Nat Turner through Reconstruction and the long Jim Crow era, from the civil rights movement of the 1950s and 1960s to “values” voting in recent presidential elections. He argues that the greatest transformations in American political history, from the Civil War through the civil rights revolution and beyond, constitute an interconnected narrative in which opposing appeals to Biblical truth gave rise to often-contradictory religious and moral complexities. And he shows how this heritage remains alive today in controversies surrounding stem-cell research and abortion as well as civil rights reform.

God and Race in American Politics is a panoramic history that reveals the profound role of religion in American political history and in American discourse on race and social justice.

Mark A. Noll is the Francis A. McAnaney Professor of History at the University of Notre Dame. His books include America's God, The Civil War as a Theological Crisis, and The Scandal of the Evangelical Mind.

"Mark A. Noll is one of our leading historians of religion. . . . [God and Race in American Politics] tells us a lot about how we talk about God in politics, yesterday and today. As he does so often, Noll here writes serenely about volatile subjects."—Martin E. Marty, Chronicle of Higher Education

"[Noll] has produced yet another admirable synthesis of a huge body of American history and historiography. . . . [T]houghtful Christian readers will find this work indispensable in understanding the big picture of race, religion, and politics in American history."—Paul Harvey, Christianity Today

"[T]his work is just the sort of introduction that those unfamiliar with the contours of politics, race and religion need. . . . Concerning the struggle for civil rights, Noll makes a powerful argument. While acknowledging the importance of the courts and community organizing, he aptly points out that religion was the indispensable foundation of the civil rights movement. The conviction that God was on the side of the black freedom struggle was powerful."—Randall J. Stephens, Christian Century

"[Noll's] work will be a must read for scholars of U.S. religious and political history."—Choice

"With the self-assurance of a skilled painter, Noll applies a series of brushstrokes that define five political alignments, each influenced by the comparative strength of the state, the market, and religion. . . . Noll's is a tragic vision but one that nevertheless brings welcome clarity to the nation's primary moral dilemma."—Andrew Rojecki, Journal of Church History

"God and Race in American Politics offers an in-depth view of the way religion has influenced politics and discourse on race and social justice throughout U.S. history. Based on a series of lectures he gave at Princeton in 2006, Noll supports his thesis with a very large body of relevant work and deftly elucidates the notion that opposing appeals to Biblical truth have created complex and, in some cases, contradictory religious and moral ideas."—Peter Lamal, The Humanist

"In this important book, Mark Noll, one of the most influential historians of American religion writing today, traces the explosive political effects of the religious intermingling with race."—Spartacus Review

"God and Race in American Politics contributes an enlightening historical analysis. . . . It is written with forceful yet well-balanced argument fully achieving its main objective. . . . It serves as a generous, informative guide for a wide readership, finding an audience in the general public as well as culture and religion historians and political scientists."—Adriana Neagu, American, British and Canadian Studies

"Noll's book is . . . a useful and astutely informed reading of foundational issues and themes that are essential to understanding historic and contemporary race and politics in American religion."—Sylvester A. Johnson, Journal of American History

"Mark Noll's brief but incredibly insightful survey of God and Race in American Politics offers one of the most significant analyses of race and religion in American political history. . . . Knoll's analysis of these most complicated issues in American history reveals a narrative of often contradicting religious and moral complexities. He wrestles with his subject, not shying away from this difficult assignment, with moral dexterity, skillful analysis, and solid historic research. Knoll has provided much food for thought."—Trevor O'Reggio, Andrew's University Seminary Studies

"The book succeeds admirably as a study of the parallels between religious opinions, electoral strategies, and orientations to state power. Its successes invite further consideration of the messy, embodied modes by which religio-racial identities are enacted and destabilized, and of the role of churches as counterpublics. . . . To acknowledge this is not to overlook the book's power as historical narrative. Rather, that Noll's book gives rise to such questions is an indication of its suggestiveness."—Jason C. Bivins, Journal of Religion

"God and Race in American Politics is a magisterial account of the interplay of race and religion in America from slavery to today. The account is balanced, neither an indictment nor an apologia. As Noll puts it himself, it is a story of 'spectacular liberation alongside spectacular oppression.'"—Peter L. Berger, author of The Sacred Canopy

"Noll writes well and tells an engaging story, challenging the reader to think about the connections he posits. This work will appeal to a broad array of readers interested in questions of race, religion, and politics in America's past and present. I know of no other books that address these issues in precisely this way."—Daniel W. Stowell, author of Rebuilding Zion

"This book eloquently speaks to what is surely one of the most bedeviling issues in American history: the tragic problem of race and its complicated entanglement with religion. With his usual sharp eye for historical detail and an unflinching focus on the unforeseen ironies and paradoxes of America's racial history, Noll tells a compelling story of sin and grace."—R. Marie Griffith, Princeton University