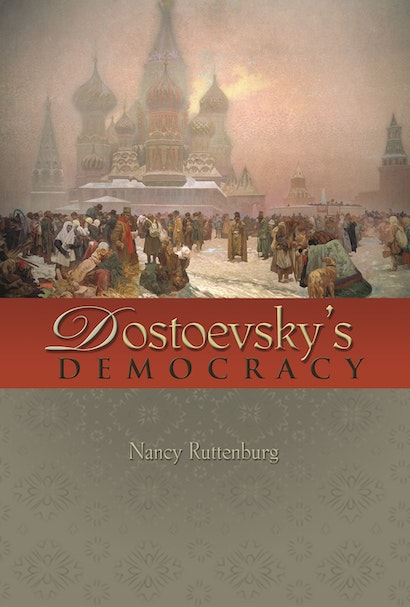 Dostoevsky’s Democracy offers a major reinterpretation of the life and work of the great Russian writer by closely reexamining the crucial transitional period between the early works of the 1840s and the important novels of the 1860s. Sentenced to death in 1849 for utopian socialist political activity, the 28-year-old Dostoevsky was subjected to a mock execution and then exiled to Siberia for a decade, including four years in a forced labor camp, where he experienced a crisis of belief. It has been influentially argued that the result of this crisis was a conversion to Russian Orthodoxy and reactionary politics. But Dostoevsky’s Democracy challenges this view through a close investigation of Dostoevsky’s Siberian decade and its most important work, the autobiographical novel Notes from the House of the Dead (1861). Nancy Ruttenburg argues that Dostoevsky’s crisis was set off by his encounter with common Russians in the labor camp, an experience that led to an intense artistic meditation on what he would call Russian “democratism.” By tracing the effects of this crisis, Dostoevsky’s Democracy presents a new understanding of Dostoevsky’s aesthetic and political development and his role in shaping Russian modernity itself, especially in relation to the preeminent political event of his time, peasant emancipation.

Nancy Ruttenburg is professor of comparative literature, English, and Slavic literatures and chair of the Department of Comparative Literature at New York University. She is the author of Democratic Personality: Popular Voice and the Trial of American Authorship.

"Dostoevsky's Democracy will be read both by literary scholars, and those interested in the history of ideas."—Lesley Chamberlain, Times Literary Supplement

"Nancy Ruttenburg offers a major reinterpretation of Dostoevsky's life and work by re-examining the crucial transitional period between the early works of the 1840s and the important novels of the 1860s."—Times Higher Education

"[A] scholarly and well-written work. . . . Its strengths are its erudition, sophisticated exploration of narrative technique and application of a range of conceptual models to literary contexts. . . . [A]n excellent and original study of Notes from the House of the Dead which makes a real contribution to our understanding of this unique work."—Robert Reid, European Legacy

"This elegant and deeply argued book offers a major revision of the standard narrative of Dostoevsky's postexile emergence as a convert to Orthodoxy and conservative nationalism. Nancy Ruttenburg presents a provocative and persuasive reading of Dostoevsky's first novel, Notes from the House of the Dead, situating it as the wellspring of his particular form of utopian Russian populism."—Dale E. Peterson, Amherst College