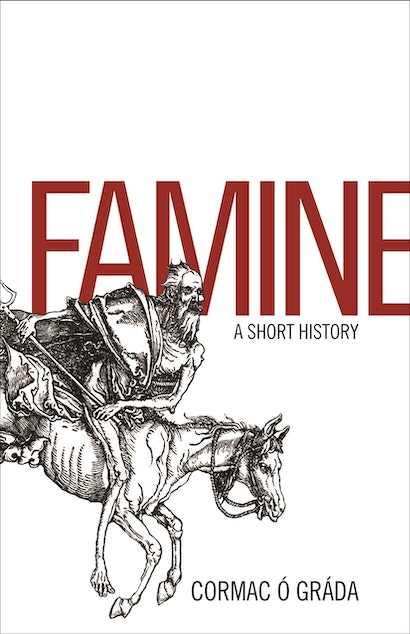 Famine remains one of the worst calamities that can befall a society. Mass starvation — whether it is inflicted by drought or engineered by misguided or genocidal economic policies — devastates families, weakens the social fabric, and undermines political stability. Cormac Ó Gráda, the acclaimed author who chronicled the tragic Irish famine in books like Black ‘47 and Beyond, here traces the complete history of famine from the earliest records to today.

Combining powerful storytelling with the latest evidence from economics and history, Ó Gráda explores the causes and profound consequences of famine over the past five millennia, from ancient Egypt to the killing fields of 1970s Cambodia, from the Great Famine of fourteenth-century Europe to the famine in Niger in 2005. He enriches our understanding of the most crucial and far-reaching aspects of famine, including the roles that population pressure, public policy, and human agency play in causing famine; how food markets can mitigate famine or make it worse; famine’s long-term demographic consequences; and the successes and failures of globalized disaster relief. Ó Gráda demonstrates the central role famine has played in the economic and political histories of places as different as Ukraine under Stalin, 1940s Bengal, and Mao’s China. And he examines the prospects of a world free of famine.

This is the most comprehensive history of famine available, and is required reading for anyone concerned with issues of economic development and world poverty.

Cormac ÓGráda is professor of economics at University College Dublin. His books include Jewish Ireland in the Age of Joyce (Princeton), Black '47 and Beyond: The Great Irish Famine in History, Economy, and Memory (Princeton), and Ireland: A New Economic History, 1780-1939.

"This is why Cormac Ó Gráda's latest book is so surprising. He is an optimist. According to him, famines are becoming less common. Even better: they will probably decline in frequency even further. Is it time to declare famine history? Ó Gráda says 'yes'. This is a thesis not to be lightly dismissed. Ó Gráda is a distinguished economic historian. He is the world's foremost authority on the Irish economy, and has written eloquently on the Great Famine of the late 1840s, in which around one million Irish men and women died. Furthermore, this book is packed with facts, all eloquently presented. Although it is a compact little book with generous margins, it is truly global in nature and spans the period from the beginning of written history to the present."—Joanna Bourke, The Times

"Despite its modest title this is an impressive book. . . . Apart from the author's encyclopaedic knowledge, this book is distinguished by its attention to detail, insistence on evidence to back up arguments, and clever structure, which enables the reader to engage easily with cutting-edge arguments about the nature and evolution of famine. It is likely to become the standard academic text on the subject, but its accessible style, clarity and illustrations make it of much wider interest and significance."—Pádraig Carmody, The Irish Times

"This persuasive argument for global development is intricate enough to satisfy policy wonks but written with a larger audience in mind."—Publishers Weekly

"This is an excellent book for any student, researcher, or policy maker interested in famine, food scarcity, or hunger."—Choice

"Regarded as Ireland's premier economic historian even before the publication in 1999 of his widely praised Black '47 and Beyond: The Great Irish Famine in History, Economy, and Memory, Cormac Ó Gráda of the University of Dublin created tremors of anticipation with the highly publicized Famine: A Short History, which establishes him more securely as a scholar in command of the field as a whole."—Harold V. Cordry, Foreword Magazine

"Cormac Ó Gráda's book deals with some of the grimmest episodes of human suffering to be recorded. And yes, the author's style is concise and direct. But the book, while always engrossing, is anything but ghoulish or sensationalised and its sociopolitical lessons are relevant to many of the gravest problems facing the world today."—Roy Williams, The Australian

"This is an excellent book. Whether you need a quick reference or a textbook on famine or you wish to study a specific aspect, this book is the place to start."—Violetta Hionidou, BBC Magazine

"So far, the classic steeds of the Apocalypse—War, Pestilence, Death—gallop apace in the current millennium. The one exception is Famine. In his fascinating, disturbing new book, Famine: A Short History, economist Cormac Ó Gráda examines the robust evidence that the third horseman is faltering, and considers whether he might indeed be hobbled and consigned to history. . . . Ó Gráda is a nimble and sophisticated thinker."—Karen Long, The Cleveland Plain Dealer

"And as Ó Gráda notes in a lengthy case study, even the people of a country prone to famine, Bengalis, were, in one of their worst famines, the 'unwitting, colonial casualties of a struggle not of their making—that against fascism.' And however distant that past may seem as markets grow ever more integrated and crisis response ever more rapid, Ó Gráda warns that without peace and good governance, we will never have a famine free world."—Zocalo Public Square

"This book will be of great interest to the general and to the specialist reader and both will find many passages of interest to them. It is well written, easy to read, and provides an excellent introduction to the field. It is especially strong in presenting empirical data from many sources to deal with relevant analytic questions."—L. H. Lumey, European Journal of Population

"[Ó Gráda's] work is an extraordinary addition to the famine literature and should be of much interest to both consumers and producers of famine scholarship. Ó Gráda's ability to tackle a very difficult subject in an engaging manner will especially be useful to students and scholars who want a quick but comprehensive overview of famine."—William J. Moon, Yale Human Rights and Development Law Journal

"The book's greatest and invaluable contribution deals with the demographics of famine. Ó Gráda has vast knowledge and expertise in this field and here provides an indispensable synthesis. . . . This is an extremely significant observation, both for historical understanding and for contemporary policy."—Dana Simmons, Journal of Modern History

"Famine . . . has a good mix of detail and overview. As an accessible multidisciplinary survey, it may be useful to specialists—historians, social scientists, development workers, economists—as well as lay readers."—Danny Reviews

"It is a must for agricultural economists who work in agencies providing development assistance. And it will inform a much wider audience of agricultural and social scientists who grapple with the technical and ethical dilemmas of malnourishment and periodic starvation that still persist in an affluent world."—Roger Mauldon, Australian Journal of Agricultural and Resource Economics

"This is a really fine contribution and delivers what it claims: a short account of the long history of famines in the world. Ó Gráda tells a well-integrated story, with excellent analytical content and empirical richness. This is an impeccably chiseled product by one of the world's leading famine analysts."—Amartya Sen, Nobel Prize-winning economist

"Ó Gráda tells an important story of the history of famine from earliest times until the present, and offers prognostications for the future. There is very little to rival this book. Famine is the most comprehensive short treatment of the subject available."—William Chester Jordan, author of The Great Famine

"This is an important book. Cormac Ó Gráda lays out a history of famine around the world and uses this to extract common themes around the causes, morphology, and consequences of and reactions to famine. Famine makes fascinating reading."—Peter Walker, Tufts University

"Original and important. The history of famine has not ended. Famine is relevant and timely."—Joachim von Braun, coauthor of Famine in Africa