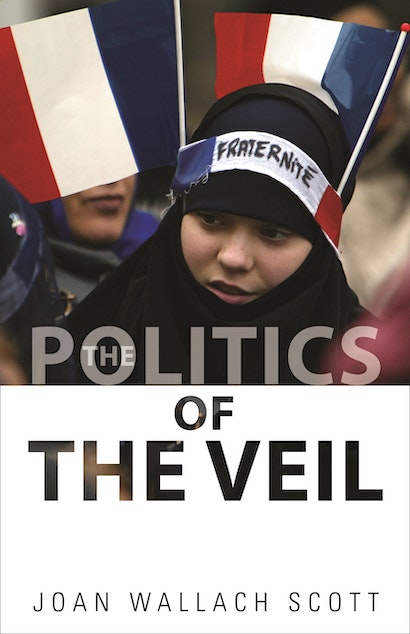 In 2004, the French government instituted a ban on the wearing of “conspicuous signs” of religious affiliation in public schools. Though the ban applies to everyone, it is aimed at Muslim girls wearing headscarves. Proponents of the law insist it upholds France’s values of secular liberalism and regard the headscarf as symbolic of Islam’s resistance to modernity. The Politics of the Veil is an explosive refutation of this view, one that bears important implications for us all.


Joan Wallach Scott, the renowned pioneer of gender studies, argues that the law is symptomatic of France’s failure to integrate its former colonial subjects as full citizens. She examines the long history of racism behind the law as well as the ideological barriers thrown up against Muslim assimilation. She emphasizes the conflicting approaches to sexuality that lie at the heart of the debate — how French supporters of the ban view sexual openness as the standard for normalcy, emancipation, and individuality, and the sexual modesty implicit in the headscarf as proof that Muslims can never become fully French. Scott maintains that the law, far from reconciling religious and ethnic differences, only exacerbates them. She shows how the insistence on homogeneity is no longer feasible for France — or the West in general — and how it creates the very “clash of civilizations” said to be at the root of these tensions.

The Politics of the Veil calls for a new vision of community where common ground is found amid our differences, and where the embracing of diversity — not its suppression — is recognized as the best path to social harmony.

Joan Wallach Scott is the Harold F. Linder Professor in the School of Social Science at the Institute for Advanced Study. Her books include Parite!: Sexual Equality and the Crisis of French Universalism and Gender and the Politics of History.

"Scott does a good job of conveying the hysteria that surrounded the foulard debate in France...Scott's broad and exhaustive research makes for a bracing account of the debate."—Laila Lalami, The Nation

"Veil-bashing is suddenly socially acceptable among not merely tabloid-reading Little Englanders, but also metropolitan sophisticates...Why should a bit of cloth so threaten the French republic? That is the central question posed by [this] subtle new study...Many French commentators cast the debate about the veil as an issue about Muslims, Islam and integration. Scott, a distinguished historian at Princeton's Institute for Advanced Study, shows that it revealed rather more about the French themselves."—Carla Power, New Statesman

"This book is a powerful denunciation of the French government and people whom Scott labels as racist, discriminatory, and intolerant of Muslim immigrants primarily from North Africa. In instituting a ban on the wearing of Muslim headscarves in public schools, the author claims that France has gone too far in its policies of strict secularism and adherence to the values of republicanism in which citizenship is conceived of as an individual matter devoid of ethnic and religious content. . . . [A] fascinating piece of scholarship."—S. Majstorovic, Choice

"It is difficult to do justice to the rigour and subtlety of this important book, written by a distinguished historian with previous works on gender and democratic politics. It should be read not only by those interested in the French situation but also by anyone who is concerned by the hysteria surrounding Muslims in Europe. It clarifies the ideas behind current debates on multiculturalism, assimilation and integration, and points the way towards a solution."—Mary Hossain, Journal of Islamic Studies

"The Politics of the Veil is a propitious contribution to the exploration and analysis of the complex meanings and purported meanings of these phenomena that have come to symbolise for Turkey and France the struggle to defend the foundations of their Republic against forces that allegedly undermine all that is glorious and good about these 'singular' or 'exceptional' states."—Elif Aydýn, The Muslim News

"[I]t is important to remember the lessons of the headscarf ban, to understand the politics that lay behind it and its racist implications. This book is a useful reminder of both."—Sadie Robinson, International Socialism

"Scott's book is a wonderful discussion about how well and how badly societies respond to religious challenges. I strongly recommend it."—Iva Ellen Deutchman, Politics and Religion

"This book will undoubtedly rank as one of the best Anglo-American critical commentaries on the affaire du foulard and the 2004 law banning religious signs in schools...[Scott] succeeds in providing a magisterial demonstration of the power of discourse—of the ways in which abstract ideas, when mediated through a vibrant political culture, can influence collective thinking and practice."—Cécile Laborde, La Vie Des Idées

"Joan Scott authoritatively rejects many of the arguments that are often used in favor of totally excluding Islam from the public sphere. In doing so she has provided much food for thought and has written a book that is equally valuable to scholars and to students in a graduate or upper level undergraduate course."—Hootan Shambayati, Law and Politics Book Review

"The Politics of the Veil is written in clear and accessible prose, and its provocative yet succinct chapters are thought provoking and user friendly at the same time. . . . [T]he book can be easily divided up and read over two or three class periods or it can be comfortably assigned as a whole. Because its subject matter is so pertinent to so many disciplines, the book can be used in history, sociology, anthropology, political science, gender studies, European Studies, religion, or any courses in the humanities or social sciences examining contemporary French politics and society."—Kristen Ghodsee, Women's Studies International Forum

"The Politics of the Veil . . . challenges the traditions of detached scholarship, yet Scott's careful use of specific evidence adheres to scholarly methods and demonstrates how historians can contribute critical insights to the public debates of our own time."—Lloyd Kramer, Journal of Modern History

"This is a very important and . . . welcome book. . . . [T]his sharp and insightful study is undoubtedly a must for any student on not only French society, but of questions regarding secular ideology, gender, and 'deterritorialized' Islam in general."—Per-Erik Nilsson, Evironment and Planning

"Scott succeeds in revealing how the inability of French government's failure to address the issue of the veil meaningfully underlines its current inability to create a country where the co-existence of differences, rather than celebration of what is common or the same, is the basis of community."—Irmak Ertuna, Darkmatter

"Scott unfolds excellent and detailed analyses of the construction of the citizen in the French nation state, of French racism and Algeria, and of the prominent news events in the French veiling controversy."—Virginia Corvid, Feminist Collections

"Brilliant, crisp, and cogently argued. Joan W. Scott's novel and trenchant discursive analysis exposes the prejudices of the reductionist French versions of secularism and feminism regarding Islam and French Muslims from North African and Arab origins. The study is illuminating far beyond the French case, as former colonial and/or working subjects struggle for integration and recognition of their difference."—Abdellah Hammoudi, Princeton University

"Carefully argued, insightful and humane, Joan Scott's The Politics of the Veil is far and away the best account of France's identity crisis that was signaled by the famous headscarf affair. The final chapter, on the symbolic meanings of the headscarf/veil, is the most original and brilliant piece of writing that I have read on this topic. This is an indispensable book, transcending the particularity of French obsessions and forcing the reader to think about wider political problems that concern us all."—Talal Asad, author of On Suicide Bombing

"Scott traces the history and politics of veil controversies in France and draws apart intertwined strands, starting with the legacy of racism from the colonial past. She persuasively argues for the negotiation of cultural and religious differences rather than their negation. This book will be required reading for all those concerned with the integration of Muslims into Western Christian societies."—Beth Baron, author of Egypt as a Woman: Nationalism, Gender, and Politics

"This is an important and timely book that will challenge the dominant terms used to debate the French government's ban on the veil in public schools. Through a careful analysis of historical and contemporary French discourse on Muslims and Arabs, Scott helps us see how the controversy over the veil is indexical of a deep paradox that haunts the ideology of French Republicanism of which the principle of laïcité is a crucial part."—Saba Mahmood, author of Politics of Piety: The Islamic Revival and the Feminist Subject