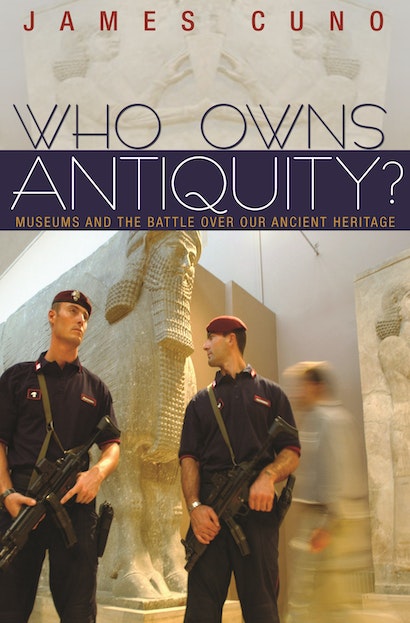 Whether antiquities should be returned to the countries where they were found is one of the most urgent and controversial issues in the art world today, and it has pitted museums, private collectors, and dealers against source countries, archaeologists, and academics. Maintaining that the acquisition of undocumented antiquities by museums encourages the looting of archaeological sites, countries such as Italy, Greece, Egypt, Turkey, and China have claimed ancient artifacts as state property, called for their return from museums around the world, and passed laws against their future export. But in Who Owns Antiquity?, one of the world’s leading museum directors vigorously challenges this nationalistic position, arguing that it is damaging and often disingenuous. “Antiquities,” James Cuno argues, “are the cultural property of all humankind,” “evidence of the world’s ancient past and not that of a particular modern nation. They comprise antiquity, and antiquity knows no borders.”


Cuno argues that nationalistic retention and reclamation policies impede common access to this common heritage and encourage a dubious and dangerous politicization of antiquities — and of culture itself. Antiquities need to be protected from looting but also from nationalistic identity politics. To do this, Cuno calls for measures to broaden rather than restrict international access to antiquities. He advocates restoration of the system under which source countries would share newly discovered artifacts in exchange for archaeological help, and he argues that museums should again be allowed reasonable ways to acquire undocumented antiquities. Cuno explains how partage broadened access to our ancient heritage and helped create national museums in Cairo, Baghdad, and Kabul. The first extended defense of the side of museums in the struggle over antiquities, Who Owns Antiquity? is sure to be as important as it is controversial.

"A condemnation of cultural property laws that restrict the international trade in antiquities, the book doubles as a celebration of the world's great border-crossing encyclopedic museums."—Jori Finkel, New York Times

"Who Owns Antiquity? is an impassioned argument for what Cuno calls the 'cosmopolitan aspirations' of encyclopedic museums. By this he means not only collecting and showing art from every place and era, but also, and more crucially, the promotion of an essential kind of cultural pluralism. . . . Whatever one makes of Cuno's thesis, it brings into focus some urgent questions—for museums and for archaeology—that have yet to be given much attention."—Hugh Eakin, New York Review of Books

"Who Owns Antiquity? by Art Institute of Chicago director James Cuno deals with one of the most sensitive questions in today's art world: Should antiquities be returned to their country of origin? [T]his book provides a lot of worthwhile background."—Wall Street Journal

"It would be a mistake to see this deeply felt and carefully reasoned argument as self-serving. The crux of his argument is that modern nation-states have at best a tenuous connection with the ancient cultures in question, and their interests are political rather than scientific...Cuno advocates instead a universal, humanistic approach to the world's shared cultural treasures...Cuno's pleas for a more expansive approach to cultural artifacts must be taken seriously."—Publishers Weekly

"The author's message is that stewardship, not ownership, is what matters. Trade in antiquities should be dictated not by politics, but by the demands of conservation, knowledge, and access. The argument presented here is thought-provoking. Cuno may be over-optimistic. But you can't help feeling that he is right."—Financial Times

"Cuno worries that 'encyclopedic' museums such as the Art Institute and the Louvre, which contain antiquities from around the planet, are endangered by nations that, simply put, want their stuff back — and don't want any more stuff to leave their borders. In Who Owns Antiquity? Cuno answers his own question this way: All of us do."—Andrew Herrmann, Chicago Sun Times

"Chronicles [Cuno's] views about the antiquity trade—a global community enmeshed in a war of ideas. Collectors, museum directors, archeologists, dealers and even nations are in dispute. The battle line is drawn between those who believe that national policies should prevent the looting of archeology sites and those—including a very outspoken Cuno—who think that such policies don't prevent plundering and should be changed to ensure artifacts are globally shared."—Madeline Nusser, Time Out Chicago

"I can't remember a book on museums that has generated quite so much publicity and critical comment as this one."—Artknows

"Cuno implicitly poses the question: 'Whose nation is it anyway?' .... His is a cogent and powerful argument that he expresses with personal conviction."—Robin Simon, New Statesman

"James Cuno, director of the Art institute in Chicago, has written a clear, well-argued...book about the vexed question of how great museums like his should collect ancient objects."—Art Newspaper

"Impressive in its grasp of historical and political issues, ranging across anthropology, archaeology, and law, Cuno's book evinces careful thought about the implications of antiquities trafficking across many eras."—American Scholar

"[F]ascinating, and extremely helpful in providing a lucid account of changing attitudes to cultural property since the Second World War. . . . Many of his arguments are persuasive."—Literary Review

"Who Owns Antiquity? by James Cuno explores the impact of new restrictions being placed on the acquisition of antiquities and how these will affect future museums."—Art and Antiques

"[Cuno] argues convincingly that current cultural property laws are too retentionist. . . . It's difficult to disagree with the idea that people benefit when antiquities of other countries can be seen in museums around the world. And the virtues of partage also seem clear. As Cuno points out, the collections at the great museums of the world could not have been put together under our current system of cultural property laws, and the millions of people who have marveled at these collections would be poorer for not having seen them."—Mary Katherine Ascik, The Weekly Standard

"Cuno sets his stage for a discussion of an ongoing legalistic international battle dealing with archaeological objects by introducing the case of the Elgin marbles. What superficially may seem a simple matter of 'ethnic nationalism' is described as considerably more complex, dealing with such matters as 'cultural property,' the notion of nation-states, and 'partage'—the sharing of archaeological finds (the author's suggested solution to disputes). . . All readers interested in current interaction among museums, academics, collectors, politicians, and so forth will be well informed here."—K. Marantz, Choice

"James Cuno's passionate, finely reasoned new book, Who Owns Antiquity? . . . is a fresh salvo in the ongoing battle between museums that collect antiquities and modern states that claim to be the legal heirs of ancient societies and cultures. . . . Cuno mobilizes a wealth of anecdotes and examples to support [his] position."—Benjamin Genocchio, Art in America

"The book is cogently argued and extremely well documented. The 'select bibliography' is ten pages. It explores in great depth all of the recent turmoil regarding the legal ownership of antiquities. . . . No one involved in the acquisition of antiquities can ill afford to pass this book by as it sets the stage and defines the complexities involved in this heated battle that is sure to rage on for years to come."—Jerome M. Eisenberg, Ph.D., Minerva

"Whether or not you agree with Cuno's arguments, I believe this book is an important addition to the discussion on museum collections."—Richard Gerrard, Muse

"Overall, Cuno's analysis presents a range of themes, particularly the role of the encyclopedic museum in contemporary society, that will resonate with the museum community and students of museum studies. Nationalistic agendas are set within a compelling theoretical argument that should be read by those engaged in writing as well as following museum and archaeological policies, provided that the reader understands that Cuno's emphasis is on objects and access to them rather than on the more pressing issue of the preservation of archaeological sites and cultural landscapes for a cosmopolitan world community."—Christina Luke, American Anthropologist

"Cuno defends the museum side of the issue, and he is well suited to make the case."—Matthew J. Milliner, First Things

"Written with vim and verve; copiously and thoughtfully annotated. It is not necessary to agree with everything said, but there is much room for thought."—James Hargrave, Ancient West & East

"James Cuno has written thoughtfully and responsibly on cultural property matters, and in this book he goes beyond the usual legal and ethical ground to address deeper philosophical issues. This is a must-read for all concerned with the fate of our ancient heritage, whether source countries, archaeologists, collectors, or museum curators. The topic is of the greatest importance to all of us."—Philippe de Montebello, former director of the Metropolitan Museum of Art