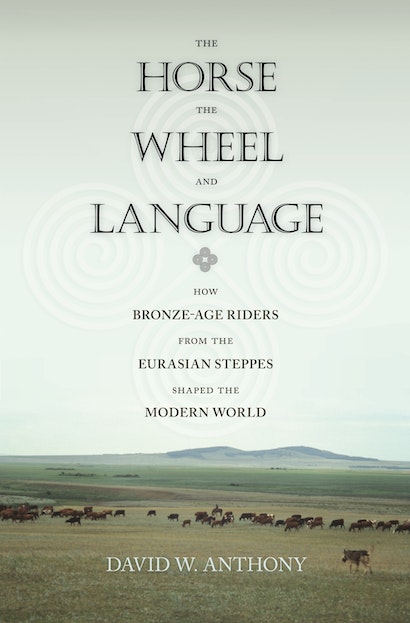 Roughly half the world’s population speaks languages derived from a shared linguistic source known as Proto-Indo-European. But who were the early speakers of this ancient mother tongue, and how did they manage to spread it around the globe? Until now their identity has remained a tantalizing mystery to linguists, archaeologists, and even Nazis seeking the roots of the Aryan race. The Horse, the Wheel, and Language lifts the veil that has long shrouded these original Indo-European speakers, and reveals how their domestication of horses and use of the wheel spread language and transformed civilization.


Linking prehistoric archaeological remains with the development of language, David Anthony identifies the prehistoric peoples of central Eurasia’s steppe grasslands as the original speakers of Proto-Indo-European, and shows how their innovative use of the ox wagon, horseback riding, and the warrior’s chariot turned the Eurasian steppes into a thriving transcontinental corridor of communication, commerce, and cultural exchange. He explains how they spread their traditions and gave rise to important advances in copper mining, warfare, and patron-client political institutions, thereby ushering in an era of vibrant social change. Anthony also describes his fascinating discovery of how the wear from bits on ancient horse teeth reveals the origins of horseback riding.

The Horse, the Wheel, and Language solves a puzzle that has vexed scholars for two centuries — the source of the Indo-European languages and English — and recovers a magnificent and influential civilization from the past.

David W. Anthony is professor of anthropology at Hartwick College. He is the editor of The Lost World of Old Europe (Princeton). He has conducted extensive archaeological fieldwork in Ukraine, Russia, and Kazakhstan.

"David W. Anthony argues that we speak English not just because our parents taught it to us but because wild horses used to roam the steppes of central Eurasia, because steppedwellers invented the spoked wheel and because poetry once had real power. . . . Anthony is not the first scholar to make the case that Proto-Indo-European came from this region [Ukraine/Russia], but given the immense array of evidence he presents, he may be the last one who has to.... The Horse, the Wheel, and Language brings together the work of historical linguists and archaeologists, researchers who have traditionally been suspicious of each other's methods. [The book] lays out in intricate detail the complicated genealogy of history's most successful language."—Christine Kenneally, The New York Times Book Review

"A thorough look at the cutting edge of anthropology, Anthony's book is a fascinating look into the origins of modern man."—Publishers Weekly

"In the age of Borat it may come as a surprise to learn that the grasslands between Ukraine and Kazakhstan were once regarded as an early crucible of civilisation. This idea is revisited in a major new study by David Anthony."—Times Higher Education

"Starting with a history of research on Proto-Indo-Europeans and exploring how this field for obvious reasons assumed an ethno-political dimension early on, leading PIE scholar Anthony moves on to established facts . . . then shifts his focus to the interrelation of the three essential elements of horse, chariot, and language and how the first and second provided the means for the spread of Indo-European languages from India to Ireland. The bulk of the book contains the factual evidence, mainly archaeological, to support this argument. But a strength of the book is its rich historical linguistic approach. The combination of the two provides a remarkable work that should appeal to everyone with an interest not just in Indo-Europeans, but in the history of humanity in general."—K. Abdi, Dartmouth College, for, CHOICE

"David Anthony's book is a masterpiece. A professor of anthropology, Anthony brings together archaeology, linguistics, and rare knowledge of Russian scholarship and the history of climate change to recast our understanding of the formation of early human society."—Martin Walker, Wilson Quarterly

"The Horse, the Wheel, and Language brings together the work of historical linguists and archaeologists, researchers who have traditionally been suspicious of each other's methods. Though parts of the book will be penetrable only by scholars, it lays out in intricate detail the complicated genealogy of history's most successful language."—Christine Kenneally, International Herald Tribune

"The Horse, the Wheel and Language maps the early geography of the Russian steppes to re-create the lost world of Indo-European culture that is as fascinating as any mystery novel."—Arthur Krim, Geographical Reviews

"In its integration of language and archaeology, this book represents an outstanding synthesis of what today can be known with some certainty about the origin and early history of the Indo-European languages. In my view, it supersedes all previous attempts on the subject."—Kristian Kristiansen, Antiquity

"If you want to learn about the early origins of English and related languages, and of many of our familiar customs such as feasting on holidays and exchanging gifts, this book provides a lively and richly informed introduction. Along the way you will learn when and why horses were domesticated, when people first rode horseback, and when and why swift chariots changed the nature of warfare."—Peter S. Wells, author of The Battle that Stopped Rome

"A very significant contribution to the field. This book attempts to resolve the longstanding problem of Indo-European origins by providing an examination of the most relevant linguistic issues and a thorough review of the archaeological evidence. I know of no study of the Indo-European homeland that competes with it."—J. P. Mallory, Queen's University, Belfast