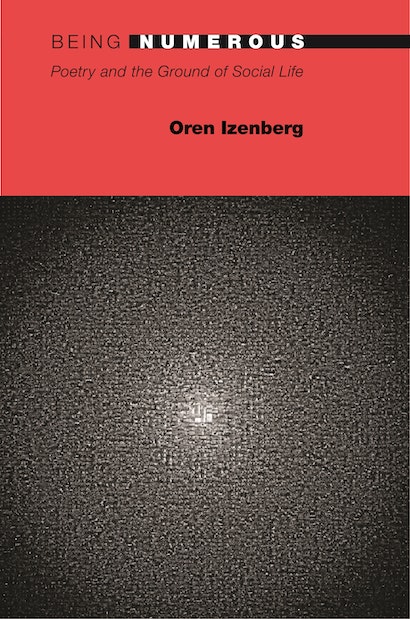 “Because I am not silent,” George Oppen wrote, “the poems are bad.” What does it mean for the goodness of an art to depend upon its disappearance? In Being Numerous, Oren Izenberg offers a new way to understand the divisions that organize twentieth-century poetry. He argues that the most important conflict is not between styles or aesthetic politics, but between poets who seek to preserve or produce the incommensurable particularity of experience by making powerful objects, and poets whose radical commitment to abstract personhood seems altogether incompatible with experience — and with poems.


Reading across the apparent gulf that separates traditional and avant-garde poets, Izenberg reveals the common philosophical urgency that lies behind diverse forms of poetic difficulty — from Yeats’s esoteric symbolism and Oppen’s minimalism and silence to O’Hara’s joyful slightness and the Language poets’ rejection of traditional aesthetic satisfactions. For these poets, what begins as a practical question about the conduct of literary life — what distinguishes a poet or group of poets? — ends up as an ontological inquiry about social life: What is a person and how is a community possible? In the face of the violence and dislocation of the twentieth century, these poets resist their will to mastery, shy away from the sensual richness of their strongest work, and undermine the particularity of their imaginative and moral visions — all in an effort to allow personhood itself to emerge as an undeniable fact making an unrefusable claim.

Oren Izenberg is a visiting scholar at the University of Illinois, Chicago.

"A blazingly astute assessment of postmodern poetics, Oren Izenberg's Being Numerous examines the role contemporary poetry plays in representing being and what constitutes value of being."—Jeffrey Cyphers Wright, Brooklyn Rail

"[Izenberg] makes an intriguing case for focusing on the ontological dimension of poetic practice in general; readers might move beyond seeing the poem as a self-contained artifact and instead see it as a function of the poet's desire to define the person."—Choice

"Izenberg's conclusive meditation on known and unknown readers, then, seems to open and invite the readings that this book will generate, as it powerfully, scrupulously recalls us to the responsibilities inherent in any literary response."—Siobhan Phillips, Contemporary Literature

"Controversial and important, Being Numerous resurveys the poetic landscape and offers an alternative way of considering both it and our involvement in it. For Izenberg, poetry might well be considered 'something that we are.' And despite the philosophical richness of his arguments, he writes with a lucidity so attentive that his style can seem a kind of tenderness. This is a significant, revisionary book. It might also be a guide. Its claims on our attention will be more than momental."—Forrest Gander, Brown University

"Being Numerous provides a general theory of poetry's claim to universalism through lyric transactions between a writer and a reader that are both enabled and tortured by poetic form. As a result, Izenberg pays very close attention to the reader's experience of feeling connected to the scene of being one of many through the poem. I love reading this manifestic and meticulous writing, and it has a lot to offer scholars of affect, emotion, and intimacy."—Lauren Berlant, University of Chicago

"In this major book, Oren Izenberg introduces a crucial and generative new distinction that reorganizes twentieth-century poetry. Izenberg is simply the best young critic of modernist poetry around—for his capacious scholarship, his elegant prose, his imaginative scope, his close and intelligent reading, and especially his ability to show how some quite diverse poetic projects share a basic purpose."—Charles Altieri, University of California, Berkeley