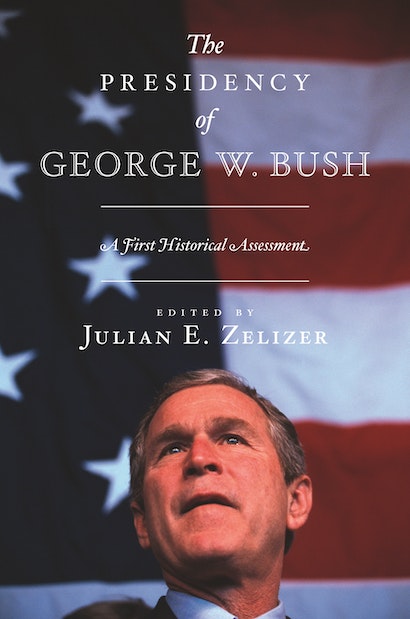 The Presidency of George W. Bush brings together some of today’s top American historians to offer the first in-depth look at one of the most controversial U.S. presidencies. Emotions surrounding the Bush presidency continue to run high — conservatives steadfastly defend its achievements, liberals call it a disgrace. This book examines the successes as well as the failures, covering every major aspect of Bush’s two terms in office. It puts issues in broad historical context to reveal the forces that shaped and constrained Bush’s presidency — and the ways his presidency reshaped the nation.

The Presidency of George W. Bush features contributions by Mary L. Dudziak, Gary Gerstle, David Greenberg, Meg Jacobs, Michael Kazin, Kevin M. Kruse, Nelson Lichtenstein, Fredrik Logevall, Timothy Naftali, James T. Patterson, and the book’s editor, Julian E. Zelizer. Each chapter tackles some important aspect of Bush’s administration — such as presidential power, law, the war on terror, the Iraq invasion, economic policy, and religion — and helps readers understand why Bush made the decisions he did. Taking readers behind the headlines of momentous events, the contributors show how the quandaries of the Bush presidency were essentially those of conservatism itself, which was confronted by the hard realities of governance. They demonstrate how in fact Bush frequently disappointed the Right, and how Barack Obama’s 2008 election victory cast the very tenets of conservatism in doubt.

History will be the ultimate judge of Bush’s legacy, and the assessment begins with this book.

Julian E. Zelizer is professor of history and public affairs at Princeton University. He is the author of Arsenal of Democracy, On Capitol Hill, and Taxing America. He is a frequent contributor to CNN.com, Politico, and the New York Times, among others.

"Julian E. Zelizer, an academic from Princeton and political commentator for CNN and The New York Times, has endeavoured to telescope the assessment of George W. Bush's presidency. Indeed, Zelizer and his distinguished fellow contributors, all senior academics from prestigious institutions ranging from Georgetown's Michael Kazin to Brown's James T. Patterson, make a virtue of their early conclusions about the 43rd president by highlighting that this is a first historical assessment. By and large they have written a critical but penetrating analysis of the years 2001 to 2009. A strength of this book is that it seeks to place the Bush presidency in the context of earlier Republican administrations."—Stephen Loosley, Australian

"Zelizer has gathered an A-list of American historians who present a detailed analysis of the presidency of George W. Bush. Each essay examines a particular facet of Bush's two terms, including such topics as terrorism, faith-based initiatives, energy policy, education, and the war in Iraq. . . . Zelizer's work provides a valuable benchmark for historians to build upon."—Library Journal

"A collaboration of distinguished scholars, this collection of a dozen essays evaluating the presidency of George W. Bush analyzes his performance in foreign and domestic policy."—Choice

"[T]he measured judgements of these essays are a welcome corrective for a presidency, and a president, that too often slide toward lurid caricature in public debate. Laying bare the appalling flaws and overlooked virtues of the Bush presidency, this judicious and informative collection is an impressive opening salvo in what is likely to be a long war."—Patrick Andelic, 49th Parallel

"Ultimately, the verdict of this thought-provoking anthology is that the Bush presidency, while certainly polarizing from a partisan perspective, was historically significant in terms of the development of American politics, policy, and institutions. If Zelizer and his colleagues do not have all the answers, they have certainly helped to provide a starting point for future studies of the obvious flaws and surprising virtues of this pivotal administration."—Andrew L. Johns, Canadian Journal of History

"Julian Zelizer's edited collection, The Presidency of George W. Bush, may not be, as its subtitle proclaims, the first historically based volume on Bush, but it is certainly one of the most rigorous and balanced. The book . . . is especially interesting for its focus on the deep instability of contemporary American conservatism and the ways in which the Bush administration can be understood as contributing to that instability. . . . The result is a nuanced and interesting account not just of the history of the Bush presidency, but also of its place in the larger social, cultural, and political trajectories of U.S. politics."—Mary E. Stuckey, Rhetoric & Public Affairs

"An all-star cast of historians examines the perplexing presidency of George W. Bush—the 'compassionate conservative' who frequently ended up allied with the hard right, the 'uniter' who presided over one of the nation's most divisive political eras, the advocate of 'humility' on the world stage who fiercely championed unilateral presidential powers. After the journalists and pundits have had their say, the historians are here to put Bush's tumultuous tenure in historical perspective. An essential resource for anyone seeking to understand contemporary American politics."—Jacob S. Hacker, coauthor of Winner-Take-All Politics and Off Center

"With clarity and precision, some of America's most prominent historians of politics, law, and international relations examine the controversial presidency of George W. Bush. Their assessments of Bush's administration are sober, rigorous, and eye-opening. Together these essays will provide a foundation for the next generation of scholarship on early twenty-first-century America."—Thomas J. Sugrue, author of Not Even Past: Barack Obama and the Burden of Race

"George W. Bush once stated that 'we'll all be dead' by the time history casts its judgment on his presidency. Instead, in this engaging and timely portrait of the Bush era, eleven leading scholars assess the 'war on terror,' the resurrection of the imperial presidency, the effects of tax cuts and corporate deregulation, and other foreign and domestic policies promoted by big-government conservatism. While acknowledging the administration's political accomplishments, the contributors to this volume emphasize the ultimate failures of the Bush presidency and the conservative movement's strategies of governance."—Matthew D. Lassiter, University of Michigan

"Analytically shrewd and historically rich, this harvest of a book convenes a group of leading historians to assess the country's recent past. Ranging from tax cuts to terrorism, and encompassing questions of ideology, multiculturalism, and presidential capacity, the contributions to this volume establish the scope and agenda for future studies of George W. Bush's tumultuous presidency."—Ira Katznelson, Columbia University

"This impressive collection features brilliant essays by some of America's best historians on the presidency of George W. Bush. It's all here—from the Bush v. Gore Supreme Court decision that sealed Bush's first-term victory to the stunning financial crisis that closed his tenure in office. This stimulating and highly accessible volume is must reading for scholars, journalists, and concerned citizens."—Eric M. Patashnik, author of Reforms at Risk

"This is a superb collection of essays. I am impressed with the range of issues they cover and the lucidity with which each essay illuminates a particular topic. Their interleaved and overlapping evidence reminds a general reader of the layers of meaning embedded in every political decision taken by the Bush administration—and the sometimes unfortunate consequences. This is an important and timely book."—Alice Kessler-Harris, author of In Pursuit of Equity