An outrageous graphic novel that investigates key concepts in mathematics 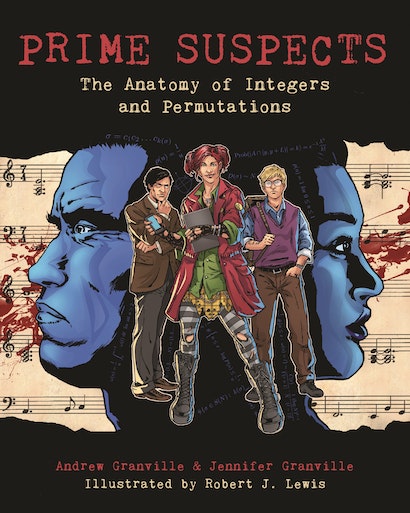 Integers and permutations—two of the most basic mathematical objects—are born of different fields and analyzed with separate techniques. Yet when the Mathematical Sciences Investigation team of crack forensic mathematicians, led by Professor Gauss, begins its autopsies of the victims of two seemingly unrelated homicides, Arnie Integer and Daisy Permutation, they discover the most extraordinary similarities between the structures of each body.

Prime Suspects is a graphic novel that takes you on a voyage of forensic discovery, exploring some of the most fundamental ideas in mathematics. Travel with Detective von Neumann as he leaves no clue unturned, from shepherds’ huts in the Pyrenees to secret societies in the cafés of Paris, from the hidden codes in the music of the stones to the grisly discoveries in Finite Fields. Tremble at the ferocity of the believers in deep and rigid abstraction. Feel the frustration—and the excitement—of our young heroine, Emmy Germain, as she blazes a trail for women in mathematical research and learns from Professor Gauss, the greatest forensic detective of them all.

Beautifully drawn and exquisitely detailed, Prime Suspects is unique, astonishing, and witty—a once-in-a-lifetime opportunity to experience mathematics like never before.

Andrew Granville is the Canada Research Chair in Number Theory at the University of Montreal and professor of mathematics at University College London. Jennifer Granville is an educator, award-winning film and theater producer, writer, and director. Robert J. Lewis is a Toronto-based graphic designer and storyboard artist for film and television.

"Prime Suspects will appeal to a variety of readers in a variety of venues . . . . For the mathematician who eats, sleeps, and drinks numbers, start on page one and just enjoy the story . . . the book is fun, and interesting, and a challenge on many levels."—Judith Reveal, New York Journal of Books

"Prime Suspects blends together the worlds of mathematics and forensic science to give readers both an interesting mystery and an education in numbers."—Anelise Farris, Rogues Portal

"This is really a great book with so many references to mathematical ideas, that you can read and reread and find every time new details hidden in the graphics."—Adhemar Bultheel, European Mathematical Society

"What a spectacular book! I am rather blown away by it."—Jonathan Shock, MathemAfrica

"Granville and Granville have performed something of a feat. They've written a graphic detective novel that is both interesting to read and yet simultaneously teaches its readers some deep mathematics . . . . It's very difficult to write a book on an advanced topic in mathematics that's accessible to math students and enthusiasts yet touches on contemporary research that is of interest to a broad swath of practicing mathematicians. Prime Suspects is such a book. And it's entertaining to boot. I recommend it in the strongest terms."—Benjamin Linowitz, MAA Reviews

"Bringing in elements from film noir, TV police shows and famous movies, coupled with some amazing art work, subtle mathematical humour and corny science jokes, and what you have is a one-of-a-kind creation – indeed, Prime Suspects has it all from minus to plus infinity."—David Appell, Physics World

"Renowned number-theorist Andrew Granville here explores the graphic novel as a format to popularize mathematical discoveries. This absolutely brilliantly illustrated book arose from an earlier play and an accompanying commissioned musical piece. The mathematics too is astonishing—but explained understandably."—Mathematics Magazine

"If you are a mathematician, I definitely recommend reading (and listening to) Prime Suspects. If you are not a mathematician, you might miss a number of references, and some passages might be too mysterious or technical, but still it makes for interesting reading; it might be good for you, too."—Marco Abate, The Mathematical Intelligencer

"The artwork and presentation are both well up to the standard of a mainstream graphic novel."—Andrew Ruddle, Mathematics Today

"Prime Suspects is a work of art which anyone with a passion for maths will appreciate and enjoy."—Lennie Wells, Mathematical Gazette

“One of the most creative ways to present advanced mathematical ideas that I have seen.”—Terence Tao, University of California, Los Angeles

"This is a fantastic project and very entertaining format for communicating both deep mathematics and the culture of mathematics—what a breath of fresh air!"—Kristin Lauter, Microsoft Research

"Properties of integers, polynomials, and permutations are shown to be identical in this beautifully illustrated graphic novel murder mystery that is a fun read for the mathematically inclined."—Dorian Goldfeld, Columbia University

"The reader gets hooked on reading more and more about the mystery of primes and permutations. Prime Suspects presents some real mathematics in such a fresh and novel way!"—Kaisa Matomäki, University of Turku, Finland

“Prime Suspects is unlike any mathematics book I’ve ever seen. Alongside stunning illustrations and playful cameos, the reader will find a probing discussion of some fascinating (and still largely unexplained) analogies between the distribution and decomposition of integers and permutations.”—Matt Baker, Georgia Institute of Technology