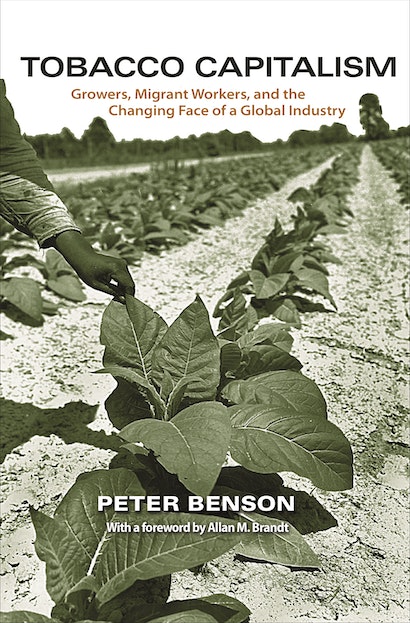 Tobacco Capitalism tells the story of the people who live and work on U.S. tobacco farms at a time when the global tobacco industry is undergoing profound changes. Against the backdrop of the antitobacco movement, the globalization and industrialization of agriculture, and intense debates over immigration, Peter Benson draws on years of field research to examine the moral and financial struggles of growers, the difficult conditions that affect Mexican migrant workers, and the complex politics of citizenship and economic decline in communities dependent on this most harmful commodity.


Benson tracks the development of tobacco farming since the plantation slavery period and the formation of a powerful tobacco industry presence in North Carolina. In recent decades, tobacco companies that sent farms into crisis by aggressively switching to cheaper foreign leaf have coached growers to blame the state, public health, and aggrieved racial minorities for financial hardship and feelings of vilification. Economic globalization has exacerbated social and racial tensions in North Carolina, but the corporations that benefit have rarely been considered a key cause of harm and instability, and have now adopted social-responsibility platforms to elide liability for smoking disease. Parsing the nuances of history, power, and politics in rural America, Benson explores the cultural and ethical ambiguities of tobacco farming and offers concrete recommendations for the tobacco-control movement in the United States and worldwide.

Peter Benson is assistant professor of anthropology at Washington University in St. Louis. He is the coauthor of Broccoli and Desire: Global Connections and Maya Struggles in Postwar Guatemala.

"Anthropologist Benson explains the shifts in US Growers' role in the multinational tobacco industry in the last half century through his focus on North Carolina's Wilson County, at the heart of US tobacco production. He bases his work on archival and ethnographic analysis of North Carolina tobacco growers and farmworkers and, more broadly, of government and industry perspectives."—Choice

"This is a big, angry, brickbat of a book. The focus of most social science research on tobacco is its consumption, so it is good to have its modes of production put under the spotlight. . . . Its 323 pages are a worthy contribution to the literature on agribusiness and agricultural capitalism and the pernicious role of the tobacco industry in manipulating the production as well as the consumption of its product for its own immoral ends."—Andrew J. Russell, Durham Anthropology Journal

"[T]his book constitutes a significant contribution to the field of the anthropology of (corporate) capitalism and will definitely appeal to a broader readership in other social sciences, anti-smoking activists and possibly even to corporate employees."—Marian Viorel Anastasoaie, Social Anthropology

"Benson has a fine ethnographic eye and a keen sense of theoretical nuance, allowing him to capture the struggles of North Carolina tobacco farmers as never before. Tobacco Capitalism is a wonderful chronicle of racialized rhetoric, migrant pride, Big Tobacco malevolence, and the sorry state of farming in new millennium America—a must-read text."—Robert N. Proctor, Stanford University

"This important book deploys cutting-edge theory in anthropology and cultural studies to examine the vastly understudied subject of tobacco farming. Through close readings of historical shifts in the farm economy and tobacco policy, Benson deftly explores the ways in which the tobacco industry has encouraged growers to attribute their economic distress to antismoking advocates rather than to agricultural restructuring, global competition, and corporate practices."—Kathryn Dudley, Yale University

"This thoughtful, original, and interesting book is at once a history of the smoke screens of the tobacco industry, and a story about a community of growers struggling to maintain their dignity at a time when tobacco is overwhelmingly condemned. With an even and balanced voice, Benson fills a glaring void in the literature on this subject."—Mimi Nichter, University of Arizona