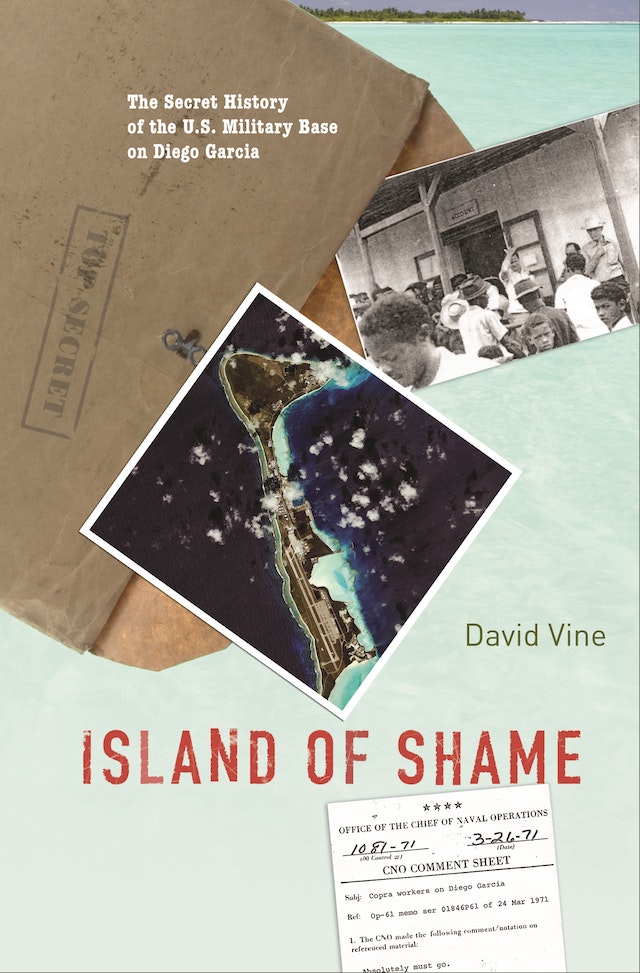 The American military base on the island of Diego Garcia is one of the most strategically important and secretive U.S. military installations outside the United States. Located near the remote center of the Indian Ocean and accessible only by military transport, the little-known base has been instrumental in American military operations from the Cold War to the war on terror and may house a top-secret CIA prison where terror suspects are interrogated and tortured. But Diego Garcia harbors another dirty secret, one that has been kept from most of the world — until now.

Island of Shame is the first major book to reveal the shocking truth of how the United States conspired with Britain to forcibly expel Diego Garcia’s indigenous people — the Chagossians — and deport them to slums in Mauritius and the Seychelles, where most live in dire poverty to this day. Drawing on interviews with Washington insiders, military strategists, and exiled islanders, as well as hundreds of declassified documents, David Vine exposes the secret history of Diego Garcia. He chronicles the Chagossians’ dramatic, unfolding story as they struggle to survive in exile and fight to return to their homeland. Tracing U.S. foreign policy from the Cold War to the war on terror, Vine shows how the United States has forged a new and pervasive kind of empire that is quietly dominating the planet with hundreds of overseas military bases.

Island of Shame is an unforgettable exposé of the human costs of empire and a must-read for anyone concerned about U.S. foreign policy and its consequences. The author will donate all royalties from the sale of this book to the Chagossians.

David Vine is assistant professor of anthropology at American University in Washington, D.C.

"[A] meticulously researched, coldly furious book that details precisely how London and Washington colluded in a scheme of population removal more redolent of the eighteenth or nineteenth century than the closing decades of the twentieth. . . . [O]ne likes to think that if Barack Obama were somehow to stumble across a copy of David Vine's fine book, he would instantly realize that a great injustice has been done—one that could easily be put right."—Jonathan Freedland, New York Review of Books

"This angry and angering book is well researched, compelling, and valuable to understanding and emerging US 'empire.'"—Choice

"For Vine imperialism, military prerogative and racism have all combined to deny a people a home simply because they were in the way. His succinct style and controlled outrage make for a damning indictment."—Phil Chamberlain, Tribune

"Island of Shame is not just a gut-wrenching account of how a tropical paradise of powder-white beaches and palm fronds was turned into a massive launch pad for America's military expansionist programme. A large chunk of the book is devoted to how the Chagossians came to build their complex but happy society in the islands and the resulting tragedy of their displacement. Above all, Vine is a top flight researcher. . . . We owe Vine a great debt for shining his light on this island of horrors."—Latha Jishnu, Business Standard

"David Vine's story of the Chagossians is an exemplary piece of both socially embedded reportage and investigative journalism, despite a tendency to indulge in the self-conscious idiom of academic ethnography and reflexive criticism of US 'imperialism.' At heart, however, he speaks truth to power. Power, though, is not listening."—Colin Murphy, Irish Times

"David Vine . . . has rendered high service by writing a thoroughly documented expose of the crime, which the world has ignored because one of its perpetrators is a superpower, the U.S., and its accomplice, the U.K."—A. G. Noorani, Frontline

"Until I read this book, why had I heard almost nothing about the Chagossians? Their forced relocation from Diego Garcia is a disgraceful violation of human rights that should be far better known. I hope that David Vine's painstakingly researched account is widely read, and that it makes its readers furious."—Anne Fadiman, author of The Spirit Catches You and You Fall Down

"The sorry tale of Diego Garcia—a saga of duplicity and collusion involving countries and politicians who should have known better—is impeccably and thrillingly told by David Vine, in a book that should be required reading for defense and human-rights officials in the new American administration. Vine can be justly proud of his tireless efforts to bring justice to a forgotten corner of the tropical world."—Simon Winchester, author of The Professor and the Madman

"Island of Shame illuminates the interior workings of the American empire as it penetrated and shattered the lives of the people of the tiny island of Diego Garcia in the Indian Ocean. David Vine turns his anthropological lenses not only on the victims, the people who were expelled to make room for a military base, but on the perpetrators as well, the American officials who oversaw the tragedy."—Frances Fox Piven, author of Challenging Authority

"This is a very good, original book on an important and intellectually challenging subject—the ruthlessness and hypocrisy of the American government in its forced expulsion of an indigenous people in order to build the supersecret military base at Diego Garcia. Vine has done a brilliant job of reconstructing the history of Diego Garcia and America's interest in it."—Chalmers Johnson, author of Nemesis: The Last Days of the American Republicv1 "The story of the U.S. base on Diego Garcia, and the cruel displacement of the island's people, has long been hidden from the American public. We owe a debt to David Vine for revealing it to the larger public."—Howard Zinn, author of A People's History of the United States

"Provocative. This book is the first significant look at how the Chagossians' fate has been tied to the needs of empire. Vine convincingly connects the U.S. military's relocation of the Chagossians with a larger historic program of military imperialism and prolonged efforts to establish strategic bases in key geographical locations around the globe. This is a story that will find a wide audience."—David H. Price, author of Threatening Anthropology