From acclaimed scholar Henry Louis Gates, Jr., the most comprehensive collection of Lincoln's writings on race and slavery 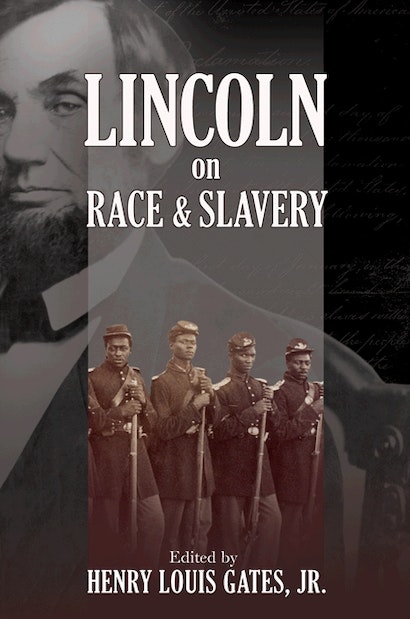 Generations of Americans have debated the meaning of Abraham Lincoln’s views on race and slavery. He issued the Emancipation Proclamation and supported a constitutional amendment to outlaw slavery, yet he also harbored grave doubts about the intellectual capacity of African Americans, publicly used the n-word until at least 1862, and favored permanent racial segregation. In this book—the first complete collection of Lincoln’s important writings on both race and slavery—readers can explore these contradictions through Lincoln’s own words. Acclaimed Harvard scholar and documentary filmmaker Henry Louis Gates, Jr., presents the full range of Lincoln’s views, gathered from his private letters, speeches, official documents, and even race jokes, arranged chronologically from the late 1830s to the 1860s.

Complete with definitive texts, rich historical notes, and an original introduction by Henry Louis Gates, Jr., this book charts the progress of a war within Lincoln himself. We witness his struggles with conflicting aims and ideas—a hatred of slavery and a belief in the political equality of all men, but also anti-black prejudices and a determination to preserve the Union even at the cost of preserving slavery. We also watch the evolution of his racial views, especially in reaction to the heroic fighting of black Union troops.

At turns inspiring and disturbing, Lincoln on Race and Slavery is indispensable for understanding what Lincoln’s views meant for his generation—and what they mean for our own.

Henry Louis Gates, Jr., is the Alphonse Fletcher University Professor and director of the W.E.B. Du Bois Institute for African and African American Research at Harvard University. Donald Yacovone has written and edited a number of books, including Freedom's Journey: African American Voices of the Civil War.

"Gates dispenses his lessons respectably. For the most part, he places Lincoln correctly in these different groups and along these different measures, even though it requires conceding that Lincoln fell far short of our own conceptions of justice and humanity. Amid the current bicentennial emoting, it is refreshing to read an evaluation of Lincoln that refuses, as Gates writes, to 'romanticize him as the first American president completely to transcend race and racism.'"—Sean Wilentz, New Republic

"Abraham Lincoln is the most analyzed and written about human being in the history of the United States. In the last two years, more than a dozen works have appeared investigating his actions, attitudes, and speeches. Only a very brave or very foolish person, therefore, would attempt another volume on 'Old Abe.' Fortunately, Henry Louis Gates Jr. and his coeditor, Donald Yacovone, are the former rather than the latter, and their book, Lincoln on Race and Slavery will be an honored addition to libraries of historians and general readers alike."—Martin Hardeman, H-Net Reviews

"An essential volume for anyone who knows Lincoln or, more crucially, thinks he knows Lincoln, this eye-opening collection—so carefully selected, judiciously edited, and wisely assembled—fully evokes the complexities of the mid-nineteenth century and its most famous American personality. Henry Louis Gates, Jr.'s piercing introduction is a dazzling piece of original, provocative, and in the end deeply felt scholarship."—Harold Holzer, cochairman of the U.S. Lincoln Bicentennial Commission

"How amazing that after 150 years, we as Americans still look back to Abraham Lincoln, above all, for guidance in our national dilemmas! Not that Lincoln provides us with easy answers—something that Henry Louis Gates, Jr., shows us in this shrewd and thoughtful selection of Lincoln's writings on our longest-bleeding national dilemmas. Frederick Douglass once spoke of Lincoln's words as 'a sacred effort.' Gates's anthology of Lincoln's words is, likewise, a sacred—and a sane and balanced—effort to introduce us to the greatest American's greatest words on our greatest problems."—Allen C. Guelzo, author of Lincoln and Douglas: The Debates That Defined America

"In Lincoln on Race and Slavery, the distinguished historian Henry Louis Gates, Jr., has collected and ably edited all of Lincoln's public and private statements on the greatest issue of nineteenth-century American history, which he introduces with a luminous essay. This is an important book that belongs in the library of every serious student of the American Civil War."—David Herbert Donald, author of Lincoln

"Of all the great Lincolnian questions, perhaps the most vexed and interesting is his evolving attitudes about race, slavery, and the future of African Americans after abolition. In his new book, Henry Louis Gates, Jr., presents vital evidence for the reader's judgment. Just as important, in his introduction he offers a pained, exact, careful, and persuasive account of how Lincoln's economic faith in free labor underlay his opposition to slavery—but also of how that narrow faith in the free market grew over time to become a moral position of compassion and courage. For all those who wish to believe in the capacity of public men to change their views through the force of moral argument, this book will be one of the most cheering of this Lincoln year."—Adam Gopnik, author of Angels and Ages: A Short Book about Darwin, Lincoln, and Modern Life

"Lincoln on Race and Slavery is a brilliant collection of historical documents that set a critical context for the American Civil War era. Its introduction is a striking and particularly valuable contribution to the 2009 bicentennial year commemoration of Abraham Lincoln's birth. Henry Louis Gates, Jr., and Donald Yacovone provide some of Lincoln's most powerful words to help us understand this most significant period of the nation's history and to more fully appreciate its legacy for America's present."—James Oliver Horton, coauthor of Slavery and the Making of America

"Henry Louis Gates, Jr., and Donald Yacovone have produced an invaluable and timely book, indispensable for anyone interested in race relations in the United States. Gates's introductory essay is simply brilliant, the best essay there is on Lincoln's views of race and slavery. Beautifully written and penetrating in its insights, it is a fitting counterpart to Lincoln's own words on these vexed subjects."—John Stauffer, author of Giants: The Parallel Lives of Frederick Douglass and Abraham Lincoln

"Frederick Douglass once spoke of Lincoln's words as 'a sacred effort.' Gates's anthology of Lincoln's words is, likewise, a sacred—and a sane and balanced—effort to introduce us to the greatest American's greatest words on our greatest problems."—Allen C. Guelzo, author of Lincoln and Douglas: The Debates That Defined America