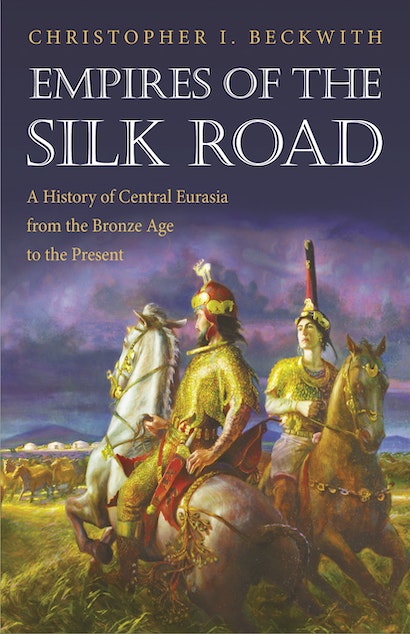 The first complete history of Central Eurasia from ancient times to the present day, Empires of the Silk Road represents a fundamental rethinking of the origins, history, and significance of this major world region. Christopher Beckwith describes the rise and fall of the great Central Eurasian empires, including those of the Scythians, Attila the Hun, the Turks and Tibetans, and Genghis Khan and the Mongols. In addition, he explains why the heartland of Central Eurasia led the world economically, scientifically, and artistically for many centuries despite invasions by Persians, Greeks, Arabs, Chinese, and others. In retelling the story of the Old World from the perspective of Central Eurasia, Beckwith provides a new understanding of the internal and external dynamics of the Central Eurasian states and shows how their people repeatedly revolutionized Eurasian civilization.


Beckwith recounts the Indo-Europeans’ migration out of Central Eurasia, their mixture with local peoples, and the resulting development of the Graeco-Roman, Persian, Indian, and Chinese civilizations; he details the basis for the thriving economy of premodern Central Eurasia, the economy’s disintegration following the region’s partition by the Chinese and Russians in the eighteenth and nineteenth centuries, and the damaging of Central Eurasian culture by Modernism; and he discusses the significance for world history of the partial reemergence of Central Eurasian nations after the collapse of the Soviet Union.

Empires of the Silk Road places Central Eurasia within a world historical framework and demonstrates why the region is central to understanding the history of civilization.

Christopher I. Beckwith is professor of Central Eurasian studies at Indiana University. His other books include The Tibetan Empire in Central Asia (Princeton).

"Christopher I. Beckwith, professor of Central Eurasian studies at Indiana University, suggests in his recent book, Empires of the Silk Road (Princeton University Press), that 'the most crucial element' of societies all through Central Eurasia—including the ones analyzed by this exhibition—was the 'sociopolitical-religious ideal of the heroic lord' and of a 'war band of his friends' that was attached to him and 'sworn to defend him to the death.' This idea, he suggests, affected the organization of early Islam as well as the structure of Tibetan Buddhist devotion. In fact, this 'shared political ideology across Eurasia,' Mr. Beckwith suggests, 'ensured nearly constant warfare.' The region's history is a history of competing empires; trade became part of what was later called the Great Game."—Edward Rothstein, New York Times

"[T]his is no mere survey. Beckwith systematically demolishes the almost universal presumption that the peoples and powers of Inner Asia were typically predatory raiders, and thus supplied themselves by extracting loot and tribute from more settled populations. . . . With his work, there is finally a fitting counterpart to Peter B. Golden's magnificently comprehensive An Introduction to the History of the Turkic Peoples: Ethnogenesis and State Formation in Medieval and Early Modern Eurasia and the Middle East, based on Arabic, Hebrew, Persian, Greek, Latin, and European medieval sources. By reading just two books anyone can now sort out Charlemagne's Avar Ring, the Golden Horde, modern Kazakhs and Uzbeks, ancient Scyths, Borodin's Polovtsian dances (they were Cumans), present-day Turks, Seljuks, Ottomans, early Turks, and Bulghars and Bulgarians, among many less familiar states or nations."—Edward Luttwak, New Republic

"[E]rudite and iconoclastic, [Empires of the Silk Road] provides a wealth of new ideas, perspectives, and information about the political and other formations that flourished in that large portion of the world known as Central Eurasia. . . . [A] major contribution to Central Eurasian and world history."—Nicola Di Cosmo, Journal of Global History

"This book demands our attention and will stimulate interest and debate in many circles. The author is to be congratulated on a book that is both thoughtful and provocative in its call for a reassessment of Central Eurasia and its role in world history."—Michael R. Drompp, Journal of Asian Studies

"In the process of illuminating this essential piece of the human past, Beckwick constructs a scrupulously researched narrative that is wholly accessible, and demands close attention."—Nicholas Basbanes, FineBooksMagazine.com

"[Beckwith] is quite a feisty writer, as in his hot-tempered preface excoriating post-modern thought. . . . Prof. Beckwith is one of those scholars whose almost innumerable footnotes can be relished for their wonderfully obscure detail."—George Fetherling, Diplomat & International Canada

"Beckwith is the first to have carried off the feat of actually writing a history of this whole expanse of time and space in a way stimulating enough to make the reader think about it from start to finish. There is certainly something heroic about that, and this book deserves therefore to go into paperback very much as it is, uncompromised by any retractions that may be forced upon its author by others."—T. H. Barrett, Bulletin of the School of Oriental and African Studies

"The result of a lifetime's work on Central Asia and a complete overturning of many of our preconceptions. . . . Essential."—Hugh Andrew, Glasgow Herald

"Beckwith's arguments are persuasive, and backed by considerable empirical evidence. He is scrupulous about noting where the evidence is murky and noting where further research is needed. Beckwith provides an interesting Central Eurasian perspective on world history. . . . Empires of the Silk Road is work that any scholar who seeks to write about Central Eurasia will need to address closely. It is a benchmark—indeed a high one—for Central Eurasian, and indeed, world history."—Thomas D. Hall, Cliodynamics

"Empires of the Silk Road is never boring, despite its involved detail. I would recommend it to anyone with enough of a background in world history and linguistics to be able to cope with a mix of outright speculation, grounded contrarianism, and straightforward history, and willing to pass over, or be entertained by, chunks of politico-aesthetic moralising."—Danny Yee, Danny Reviews

"Beckwith, like the nomadic warriors he so admires, does not shy from a battle; indeed he seems to take delight in aggressive verbal swordplay. Many readers will be disappointed or even offended by his choices and preferences, and he will surely not mind in the least. His arguments in any case have the merit of inviting engagement, and his curmudgeonly writing style makes for an entertaining reading experience whether one agrees with his assessments or not. All in all, this book is a must read for students of world history."—Richard Foltz, Journal of World History

"This is an interesting readable book, and one that keeps the reader's interest through all of its 472 pages. . . . It is not by any means an encyclopaedia but the author is very thoughtful, and the book is a creative whole, and for this view alone the book is worth our attention, but with the extensive appendices and endnotes a place should be found for it in our libraries."—Roger Bantock, Middle Way

"Empires of the Silk Road is a major scholarly achievement. This is the first book to provide a comprehensive account of the history of Central Eurasia from the Bronze Age to the present. But it is much more than a simple narrative of events in what is arguably the most important region for the development of civilization during the past four or five millennia. It is an intellectually ambitious undertaking that attempts to account for essential transformations in the cultural, economic, and political life of societies situated both within the Central Eurasian heartland and on its periphery. Beckwith achieves the radical feat of demonstrating how Central Eurasia is actually key for understanding the dynamics of human history and progress throughout antiquity, the medieval period, and the recent past. Above all, and for the first time, he convincingly shows that Central Eurasia was not a sump of poverty-stricken, unremittingly vicious subhumans, but a wellspring of vibrant, energetic, resourceful, enterprising peoples who facilitated communication and change in all directions. In other words, Beckwith turns conventional wisdom on its head and makes Central Eurasia the core of human history, rather than the embarrassing backwater which it is usually portrayed as. Perhaps his greatest contribution is in the powerful, sustained epilogue, where he shatters a whole galaxy of misconceptions about the dreaded 'barbarians.'"—Victor H. Mair, University of Pennsylvania

"Ambitious, provocative, and bristling with new ideas, Empires of the Silk Road will set off sparks. The book's clearly articulated themes are lively and stimulating, and Beckwith's integration of European, Central Asian, and East Asian materials makes this a major work in Eurasian and world history. In range and depth, this readable book is quite unlike any other."—Peter B. Golden, Rutgers University

"Empires of the Silk Road is a major scholarly achievement. . . . Beckwith turns conventional wisdom on its head and makes Central Eurasia the core of human history, rather than the embarrassing backwater which it is usually portrayed as."—Victor H. Mair, University of Pennsylvania