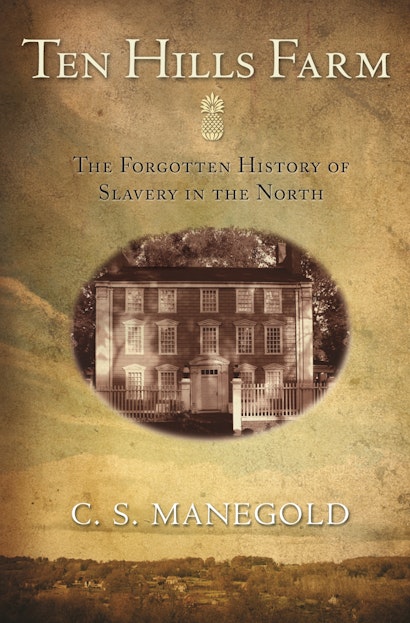 Ten Hills Farm tells the powerful saga of five generations of slave owners in colonial New England. Settled in 1630 by John Winthrop, governor of the Massachusetts Bay Colony, Ten Hills Farm, a six-hundred-acre estate just north of Boston, passed from the Winthrops to the Ushers, to the Royalls—all prominent dynasties tied to the Native American and Atlantic slave trades. In this mesmerizing narrative, C. S. Manegold exposes how the fortunes of these families—and the fate of Ten Hills Farm—were bound to America’s most tragic and tainted legacy.

Manegold follows the compelling tale from the early seventeenth to the early twenty-first century, from New England, through the South, to the sprawling slave plantations of the Caribbean. John Winthrop, famous for envisioning his “city on the hill” and lauded as a paragon of justice, owned slaves on that ground and passed the first law in North America condoning slavery. Each successive owner of Ten Hills Farm—from John Usher, who was born into money, to Isaac Royall, who began as a humble carpenter’s son and made his fortune in Antigua—would depend upon slavery’s profits until the 1780s, when Massachusetts abolished the practice. In time, the land became a city, its questionable past discreetly buried, until now.

Challenging received ideas about America and the Atlantic world, Ten Hills Farm digs deep to bring the story of slavery in the North full circle—from concealment to recovery.

C. S. Manegold is the author of In Glory's Shadow: The Citadel, Shannon Faulkner, and a Changing America (Knopf). As a reporter with the New York Times, Newsweek, and the Philadelphia Inquirer, she received numerous national awards and was part of the New York Times team honored with a Pulitzer Prize in 1994.

"Manegold's research is wide-ranging and meticulous, and with her vivid storytelling and persistent ethical sense, she does much-needed justice to this obscure chapter in American history."—New York Times Book Review

"The story of five generations of slave owners in Colonial New England. John Winthrop, Puritan governor of the Massachusetts Bay Colony settled in 1630, famously spoke of 'the shining city upon a hill,' yet he was a slave owner, as were other powerful Massachusetts families on land, part of which today is Cambridge, Mass."—Billy Heller, New York Post

"Ten Hills Farm dispels the myth of slavery as a solely Southern phenomenon. It recounts the establishment of slavery in the northern colonies and traces its path to the sugar cane fields of the island of Antigua. Manegold, an award-winning journalist and the author of In Glory's Shadow: The Citadel, Shannon Faulkner, and a Changing America, unravels the intricate family lineages and the brokered deals of America's elite and the institutions they founded upon slavery, including Harvard Law School. With a wealth of primary source research, Manegold, a former fellow at the American Antiquarian Society and Harvard University, reveals the names and faces of masters and slaves alike, while providing the reader with an invaluable lesson on the history of slavery."—ForeWord

"Exposing the Puritans as not so pure, Pulitzer Prize–winning journalist Manegold lays bare the deep slavery connections that enriched early New England. Her conversational narrative interweaves past and present in a personalized story of the whites who owned, and blacks who slaved at, Ten Hills Farm."—Thomas J. Davis, Library Journal

"This is a book that draws one into the world of pre-Revolutionary New England and beyond with a storyteller's intensity and a historian's integrity. Ten Hills Farm will win awards—and deserves them."—George H. Wittman, American Spectator

"Here, Manegold looks back to reveal the truth about the Puritans' 'bold experiment,' refuting conventional wisdom that too often dismissed references to slavery in the North. . . . This is a story that needed to be told."—Kirkus

"[An] intimate and sobering account of slavery's hold on New England. . . . [Manegold] makes vivid what has not so much been forgotten as suppressed."—Stephan Salisbury, Philadelphia Inquirer

"Manegold's graceful, small-scale treatment of the large, often murky issue of Northern slavery puts a human face on a shameful practice too often ascribed solely to the South."—Robert Knight, Post and Courier

"As an award-winning journalist, Manegold crafts a narrative not stuffed with jargon but filled with lively prose that not only links the reader to past events but illustrates their connection to modern-day issues. . . . Manegold produces a vivid and compelling case which highlights the need for both academics and the general public to understand not only the role slavery played in the North but its relationship to other American colonies as well as the larger Atlantic world."—James J. Gigantino II, Common-place

"Manegold's flair for the dramatic will be sure to please history buffs everywhere. . . . Manegold's style breathes life into potentially arid names and dates of history, and it gives white characters at least ambition, intent, and motive. Famous personages of history leap from the page in a riot of human complexity, longing, and imperfection that is eminently readable."—Alexandra Chan, Register of the Kentucky Historical Society

"Eloquent and plain-spoken meditations on America's past, such as those found in Ten Hills Farm, will help readers to hear and to seek out the ancient stories that resound still in our twenty-first-century worlds."—Lois Brown, New England Quarterly

"Written in a style that makes it accessible to a wide audience, Ten Hills Farm is an important addition to the growing literature on race and slavery in the American North. Adding the account of this property and the people who owned it, as well as lived and labored on it, moves us ever closer to regaining the complex history so casually erased over the last few hundred years."—Richard A. Bailey, The Historian

"C. S. Manegold's admirable clarity, dazzling intelligence, and resourceful reporting well serve the story of the North's participation in U.S. slavery. Ten Hills Farm is a feat of historical excavation, and Manegold's contribution to the study of this period of our nation's past is significant."—Henry Louis Gates, Jr., Harvard University

"This is an extraordinary, beautifully realized piece of historical writing that tells a powerful story of America and the Atlantic world. In spare and elegant prose, this riveting and wrenching book demolishes so much of the representation of America's founding and development. Ten Hills Farm is quite simply one of the best works of history I've read in a long time."—Steven Hahn, author of the Pulitzer Prize-winning A Nation under Our Feet

"This engaging book connects the past with the present. It tells how slavery and slave trading are deeply embedded in the complex colonial beginnings of the United States, and how this has left a legacy of problems related to the effects of race as a dominant factor in American life. The wider world of the Atlantic, within which colonial New England developed, is illuminated with imaginative flair."—David Barry Gaspar, Duke University

"The prose of this powerful narrative is vivid and concrete, the engagement with the moral question of slavery unmistakable. Incorporating good sleuthing and lively writing, Ten Hills Farm draws readers in—it tells a good yarn, and tells it well."—Rebecca J. Scott, University of Michigan