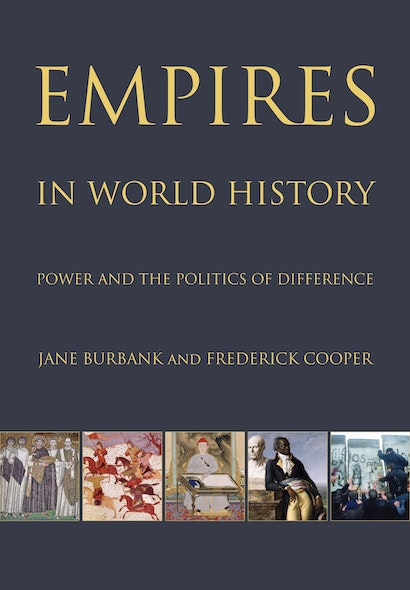 Empires—vast states of territories and peoples united by force and ambition—have dominated the political landscape for more than two millennia. Empires in World History departs from conventional European and nation-centered perspectives to take a remarkable look at how empires relied on diversity to shape the global order. Beginning with ancient Rome and China and continuing across Asia, Europe, the Americas, and Africa, Jane Burbank and Frederick Cooper examine empires’ conquests, rivalries, and strategies of domination—with an emphasis on how empires accommodated, created, and manipulated differences among populations.

Burbank and Cooper examine Rome and China from the third century BCE, empires that sustained state power for centuries. They delve into the militant monotheism of Byzantium, the Islamic Caliphates, and the short-lived Carolingians, as well as the pragmatically tolerant rule of the Mongols and Ottomans, who combined religious protection with the politics of loyalty. Burbank and Cooper discuss the influence of empire on capitalism and popular sovereignty, the limitations and instability of Europe’s colonial projects, Russia’s repertoire of exploitation and differentiation, as well as the “empire of liberty”—devised by American revolutionaries and later extended across a continent and beyond.

With its investigation into the relationship between diversity and imperial states, Empires in World History offers a fresh approach to understanding the impact of empires on the past and present.

"This is a very big book on an enormous subject. For anybody who assumes imperial history is all about Britain, with some 19th-century European imitators on the side, it will be something of a shock. For Burbank and Cooper, imperial history is world history. The authors also make a point popular among academics who hate the idea of borders keeping the underprivileged out of rich nations, that empires can be confederations of different peoples united by an all-encompassing ideal. 'Sovereignty can be shared, layered and transformed,' they write. Whether or not you agree with the implications of this argument, the weeks it will take bedtime history buffs to get through this book will be time well spent."—Stephen Matchett, The Australian

"This exemplary work, clearly laid out and fluently written, is a must for every undergraduate library, though more advanced scholars will also find much in it."—Choice

"A tour d'horizon through world history based on a stupendous knowledge of the literature, both authors take as their leitmotif the question of how empires have dealt with diversity and analyze the most varied constellations of imperial control."—Andreas Eckert, Frankfurter Allgemeine Zeitung

"Empires in World History provides a powerful teaching tool for framing the sometimes fluid and complex relationships between empires and nation-states, subjects and citizens, inclusion and exclusion. . . . This book will likely prove most useful in graduate courses in empire and/or world history and to teachers who are seeking a way to teach about empire without simply jumping from one to the next."—Clif Stratton, World History Bulletin

"A good read for those interested in any of the empires discussed or in the rise and fall of megastates."—A. A. Nofi, StrategyPage.com

"Empires in World History is one of the clearest written surveys of empires available. It will serve well as an introductory text for university students and as a reference for scholars."—Michael J. Seth, European Legacy

"Empires in World History . . . provides fresh insight into the strategies of imperial rule that have sustained empires over time. . . . It will be a useful text for both undergraduate and graduate students, as well as general readers interested in imperial histories."—Paula Hastings, World History Connected

"This book offers students of Asian affairs (and international relations generally) a broad historical and comparative perspective for viewing the actions and interactions of imperial hegemons and their potential or actual subjects. . . . First-rate."—Walter C. Clemens Jr., Asian Perspective

"This is the single best book about the relationship of empires and nations that I can think of."—Kenneth Pomeranz, author of The Great Divergence

"A major corrective to much of the literature about empire, this is destined to become a classic: it tackles a huge and topical theme, and moves at a fast pace, from Rome and Han Dynasty China, right down to the present. The coverage is sweeping and balanced. A stunning accomplishment."—Jeremy Adelman, Princeton University

"Timely and important, this book stresses the durability of empires from early times, across diverse historical eras, down to the present. The authors blur the line between the premodern and modern, and de-Europeanize history by stressing the importance of non-Western imperial experiences."—Robert Tignor, Princeton University

"This superb book redefines the field of empire and colonial studies. Careful not to reduce the complexity and variety of imperial experiences to fit a rigid or narrow definition, the authors find a fresh way to retell the story of empires, illuminating how they were maintained for such long periods, what made them, and why they collapsed. There is nothing comparable."—Ronald Grigor Suny, University of Michigan