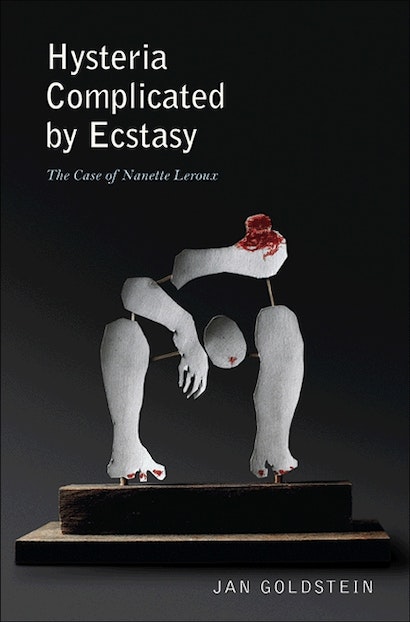 Hysteria Complicated by Ecstasy offers a rare window into the inner life of a person ordinarily inaccessible to historians: a semiliterate peasant girl who lived almost two centuries ago, in the aftermath of the French Revolution. Eighteen-year-old Nanette Leroux fell ill in 1822 with a variety of incapacitating nervous symptoms. Living near the spa at Aix-les-Bains, she became the charity patient of its medical director, Antoine Despine, who treated her with hydrotherapy and animal magnetism, as hypnosis was then called. Jan Goldstein translates, and provides a substantial introduction to, the previously unpublished manuscript recounting Nanette’s strange illness—a manuscript coauthored by Despine and Alexandre Bertrand, the Paris physician who memorably diagnosed Nanette as suffering from “hysteria complicated by ecstasy.” While hysteria would become a fashionable disease among urban women by the end of the nineteenth century, the case of Nanette Leroux differs sharply from this pattern in its early date and rural setting.

Filled with intimate details about Nanette’s behavior and extensive quotations of her utterances, the case is noteworthy for the sexual references that contemporaries did not recognize as such; for its focus on the difference between biological and social time; and for Nanette’s fascination with the commodities available in the region’s nascent marketplace. Goldstein’s introduction brilliantly situates the text in its multiple contexts, examines it from the standpoint of early nineteenth-century medicine, and uses the insights of Foucault and Freud to craft a twenty-first-century interpretation.

A compelling, multilayered account of one young woman’s mental afflictions, Hysteria Complicated by Ecstasy is an extraordinary addition to the cultural and social history of psychiatry and medicine.

Jan Goldstein is the Norman and Edna Freehling Professor of History at the University of Chicago. Her books include The Post-Revolutionary Self: Politics and Psyche in France, 1750-1850 and Console and Classify: The French Psychiatric Profession in the Nineteenth Century.

"This is a remarkable piece of analysis in which we learn not only of how a semi-literate peasant girl experienced her nineteenth-century world, but where the reader also experiences how the historian was approached and handled her material. It serves as an inspiring exercise in historical methodology and analysis. . . . Hysteria Complicated by Ecstasy is informative on many levels, and provides a coherent narrative that encapsulates various facets of the life of a girl suffering from mental illness in nineteenth-century Savoy."—Ian Miller, Canadian Journal of History

"Richly detailed and engagingly presented, this study is an important addition to the growing body of work examining medical perspectives on the condition of women and gender relations in the nineteenth century."—Louise Lyle, French Studies

"Jan Goldstein has brought to bear her formidable talents as a cultural and intellectual historian in an examination that is always subtle and suggestive. . . . It is a beautifully written and thoughtful book—there are, for example, delightful passages on her personal experiences and procedures as an historian—and superbly produced by Princeton University Press."—Peter McPhee, Metascience

"Its insights invite readers to reconsider their own views of psychosomatic illness, as well as to revisit the much-studied subject of hysteria in new terms. The book is written in a clear, concise, and elegant style; it is an admirable and original example of a multi-layered microhistory, one that extends the reader's understanding of the much wider social history forming and informing Nanette's individual case."—Cristina Mazzoni, Nineteenth-Century French Studies

"The assets of the work are numerous and Hysteria Complicated by Ecstasy: The Case of Nanette Leroux succeeds on a number of critical fronts. The usefulness of the text is beyond question in terms of the content and it represents some exemplary methodological moves that would helpfully instruct those new to archival work and inspire those familiar with such methods but new to medical history. All in all, the work is commendable, smart, and deserves recognition for its many strengths."—Alina Bennett, Foucault Studies

"[A]bsorbing and well-written. . . . This is a wonderfully thoughtful contribution to the history of medicine."—Peter Cryle, French History

"This book is a tour de force of analysis and contextualization. Investigating a set of curative procedures derived from popular culture and medical science on behalf of a young peasant girl locked in the grip of a frequently immobilizing illness, Goldstein successfully casts light on the state of medicine, the condition of women and gender relations, and the society and culture of the Savoie region in the Restoration era."—Robert A. Nye, Oregon State University

"Goldstein's historical presentation is expertly done, creating a vivid picture of the important elements in Nanette Leroux's life and in the lives of those with whom she interacted. This historical polyphony is at once intriguing, instructive, original, and deeply satisfying, especially in the way it amalgamates readings of women's mental afflictions over the course of two centuries."—Bonnie G. Smith, Rutgers University