The chilling story of Stalin’s crimes against humanity 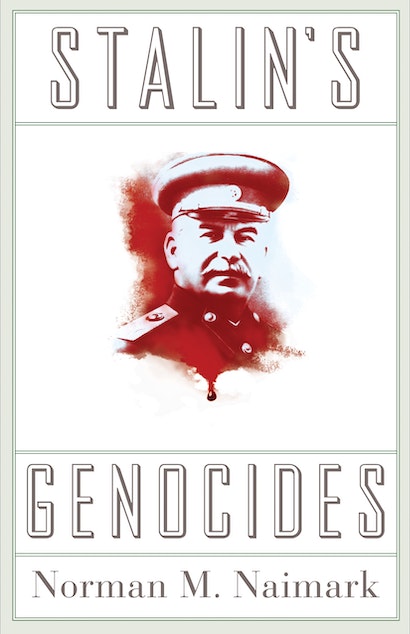 Between the early 1930s and his death in 1953, Joseph Stalin had more than a million of his own citizens executed. Millions more fell victim to forced labor, deportation, famine, bloody massacres, and detention and interrogation by Stalin’s henchmen. Stalin’s Genocides is the chilling story of these crimes. The book puts forward the important argument that brutal mass killings under Stalin in the 1930s were indeed acts of genocide and that the Soviet dictator himself was behind them.

Norman Naimark, one of our most respected authorities on the Soviet era, challenges the widely held notion that Stalin’s crimes do not constitute genocide, which the United Nations defines as the premeditated killing of a group of people because of their race, religion, or inherent national qualities. In this gripping book, Naimark explains how Stalin became a pitiless mass killer. He looks at the most consequential and harrowing episodes of Stalin’s systematic destruction of his own populace—the liquidation and repression of the so-called kulaks, the Ukrainian famine, the purge of nationalities, and the Great Terror—and examines them in light of other genocides in history. In addition, Naimark compares Stalin’s crimes with those of the most notorious genocidal killer of them all, Adolf Hitler.

Norman M. Naimark is the Robert and Florence McDonnell Professor of East European Studies at Stanford University. His books include Fires of Hatred: Ethnic Cleansing in Twentieth-Century Europe and The Russians in Germany: A History of the Soviet Zone of Occupation, 1945-1949.

"Naimark's short book is a polemical contribution to this debate. Though he acknowledges the dubious political history of the UN convention, he goes on to argue that even under the current definition, Stalin's attack on the kulaks and on the Ukrainian peasants should count as genocide. . . . Perhaps we need a new word, one that is broader than the current definition of genocide and means, simply, 'mass murder carried out for political reasons.'"—Anne Applebaum, New York Review of Books

"This is a small book that places a large exclamation point on the most incriminatingly tragic dimension of Soviet history."—Robert Levgold, Foreign Affairs

"Controversial and provocative. . . . Naimark's daring effort to redefine several of the crimes committed by Stalin's regime in the 1930s and 1940s as acts of genocide is admirable. His study is also particularly timely."—Zbysek Brezina, History Today

"Naimark gives us here in a very condensed form a fine piece of scholarship. . . . After closing the cover of this well-written and powerfully-argued monograph, more than one reader will be left wondering how Stalin was able to achieve such ghastly results."—J. Guy Lalande, Canadian Journal of History

"Written elegantly and researched impeccably, this volume will be of interest to academic and non-academic audiences alike. It will hopefully prompt other authors to re-evaluate Stalin's mass terror and name it for what it was."—Lavinia Stan, European Legacy

"Naimark deserves great credit not only for having written a crisp, concise book but also for sparking a discussion that historians far too often are reluctant to have."—Mark Kramer, Journal of Cold War Studies

"Stalin's Genocides is a magisterial and admirably lucid analysis of the Stalinist terrors that is both totally accessible and finely nuanced in its scholarship—Naimark's superb work assigns the criminality to Stalin's own bizarre personality as well as the repressive Soviet system."—Simon Sebag Montefiore, author of Young Stalin and Stalin: The Court of the Red Tsar

"This book is simply outstanding. Naimark takes the most significant aspect of Stalin's rule—mass terror—and shows how it was applied under Stalin's direct inspiration and, often, his close supervision. It is proof of Naimark's mastery of the subject and superb writing skills that he can provide sharp, gripping sketches of such monumental issues in Soviet history."—Jan T. Gross, author of Neighbors: The Destruction of the Jewish Community in Jedwabne, Poland