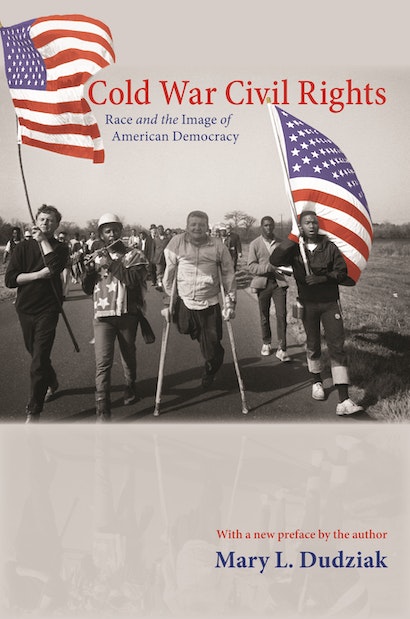 In 1958, an African-American handyman named Jimmy Wilson was sentenced to die in Alabama for stealing two dollars. Shocking as this sentence was, it was overturned only after intense international attention and the interference of an embarrassed John Foster Dulles. Soon after the United States’ segregated military defeated a racist regime in World War II, American racism was a major concern of U.S. allies, a chief Soviet propaganda theme, and an obstacle to American Cold War goals throughout Africa, Asia, and Latin America. Each lynching harmed foreign relations, and “the Negro problem” became a central issue in every administration from Truman to Johnson.


In what may be the best analysis of how international relations affected any domestic issue, Mary Dudziak interprets postwar civil rights as a Cold War feature. She argues that the Cold War helped facilitate key social reforms, including desegregation. Civil rights activists gained tremendous advantage as the government sought to polish its international image. But improving the nation’s reputation did not always require real change. This focus on image rather than substance — combined with constraints on McCarthy-era political activism and the triumph of law-and-order rhetoric — limited the nature and extent of progress.


Archival information, much of it newly available, supports Dudziak’s argument that civil rights was Cold War policy. But the story is also one of people: an African-American veteran of World War II lynched in Georgia; an attorney general flooded by civil rights petitions from abroad; the teenagers who desegregated Little Rock’s Central High; African diplomats denied restaurant service; black artists living in Europe and supporting the civil rights movement from overseas; conservative politicians viewing desegregation as a communist plot; and civil rights leaders who saw their struggle eclipsed by Vietnam.


Never before has any scholar so directly connected civil rights and the Cold War. Contributing mightily to our understanding of both, Dudziak advances — in clear and lively prose — a new wave of scholarship that corrects isolationist tendencies in American history by applying an international perspective to domestic affairs.


In her new preface, Dudziak discusses the way the Cold War figures into civil rights history, and details this book’s origins, as one question about civil rights could not be answered without broadening her research from domestic to international influences on American history.

Mary L. Dudziak is professor of law, history, and political science at the University of Southern California. Her books include Exporting American Dreams: Thurgood Marshall's African Journey, September 11 in History, and Legal Borderlands.

"In her long-awaited book, Mary Dudziak brilliantly demonstrates the interconnections between race relations and the American response to the early Cold War. . . . Dudziak sets a new standard for literature on race and Cold War foreign policy. . . . Her work deserves a wide audience."—Laura Belmonte, Journal of Cold War Studies

"Civil rights activists' efforts were watched carefully by the nation and by the world, and now are described and analyzed for us all with masterful skill by Mary Dudziak in Cold War Civil Rights. Although the Cold War is over, race remains a critical feature of global politics. As recent events remind us so well, much appears to be tied loosely with the destiny of democracy in the United States and the way that the country is seen by a diverse and divided world. In understanding this process, the issues at stake, the roles that individuals play, and the implications for human rights, Cold War Civil Rights will provide enormous assistance."—Paul Gordon Lauren, Human Rights Quarterly

"This nuanced, scholarly appraisal of the relationship between foreign policy and the civil rights story offers a fresh and provocative perspective on twentieth-century American history."—Harvard Law Review

"Carefully reasoned, containing vivid accounts, and thoroughly documented with illustrations and 55 pages of explanatory notes, this work helps us rethink the familiar by analyzing the subject matter from a new perspective. It will have broad appeal to historians, other academicians and lay readers interested in American foreign policy and race relations."—Library Journal

"Mary L. Dudziak . . . astutely explores the intimate relationship between the policy of communist containment and the civil rights movement. . . . Her book thoughtfully and thoroughly documents how ridiculous and hypocritical we appeared to the post-colonial, newly emerging nations of Africa and Asia by championing the ideals of freedom, democracy and economic equity around the world while at the same time shamelessly denying access to those very same principles to millions of Americans at home."—Edward C. Smith, The Washington Times

"Cold War Civil Rights challenges readers to think globally and locally about the relation between the Cold War and civil rights. It also provides food for thought on the post-Cold War era."—Laurie B. Green, Law and History Review

"Dudziak has marshalled an impressive array of primary source material to substantiate her case, but is is never allowed to hinder the unfolding narrative of the civil rights movement in general or her thesis in particular. . . . [An] excellent study."—George Lewis, Ethnic & Racial Studies

"An intelligent and informative book that is sure to become a staple of both civil rights and Cold War historiography."—Steven F. Lawson, American Historical Review

"Dudziak marvelously frames her discussion of the US civil rights movement in the international and Cold War context in such a way that raises, discusses, and illuminates larger issues that help us to understand how the struggle for human rights proceeds."—Carlo Krieger, Human Rights Quarterly

"Reinhold Niebuhr once commented that blacks cannot count on the altruism of whites for improvements in blacks' condition. Readers who think Niebuhr's remark was unfair to whites need to read this book. Mary Dudziak documents, in impressive detail, how the self-interest of elite whites instigated, shaped, and limited civil rights gains for blacks during the Cold War years. Raises serious questions about the future of racial justice in America."—Richard Delgado, Jean Lindsley Professor of Law, University of Colorado

"This book is a tour de force. Dudziak's brilliant analysis shows that the Cold War had a profound impact on the civil rights movement. Hers is the first book to make this important connection. It is a major contribution to our understanding of both the Civil Rights movement and the Cold War itself. . . . Because it is beautifully written in clear, lively prose, and draws its analysis from dramatic events and compelling stories of people involved from the top level of government to the grass roots, it will be an outstanding book for both students and the general public. I recommend it with no hesitation and with great enthusiasm."—Elaine Tyler May, author of Homeward Bound: American Families in the Cold War Era

"This book reflects a growing interest among historians in the global significance of race. . . . It is accessible and will have multiple uses as an approach to civil rights history, as an examination of policy making, and as a model of how a study can be attentive to both foreign and domestic aspects of a particular issue. It is tightly argued, coherent, and polished, and it features some particularly fine writing."—Brenda Plummer, author of Rising Wind: Black Americans and U.S. Foreign Affairs, 1935-1960