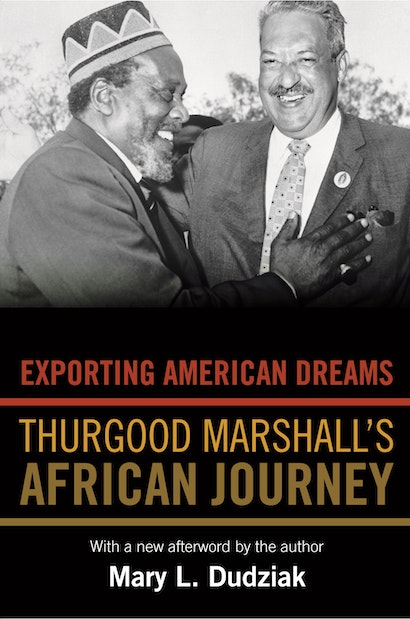 Mary Dudziak’s Exporting American Dreams tells the little-known story of Thurgood Marshall’s work with Kenyan leaders as they fought with the British for independence in the early 1960s. Not long after he led the legal team in Brown v. Board of Education, Marshall aided Kenya’s constitutional negotiations, as adversaries battled over rights and land — not with weapons, but with legal arguments. Set in the context of Marshall’s civil rights work in the United States, this transnational history sheds light on legal reform and social change in the midst of violent upheavals in Africa and America. While the struggle for rights on both continents played out on a global stage, it was a deeply personal journey for Marshall. Even as his belief in the equalizing power of law was challenged during his career as a Supreme Court justice, and in Kenya the new government sacrificed the rights he cherished, Kenya’s founding moment remained for him a time and place when all things had seemed possible.

Mary L. Dudziak is professor of law, history, and political science at the University of Southern California. Her books include Cold War Civil Rights, September 11 in History, and Legal Borderlands.

"[A] thought provoking and painstakingly researched journey through a crucial transformational moment in two nations' histories. . . . [W]e are invited to reflect on the potentials and core limits on liberalism, democracy, and law as paths to transformation and justice."—Julie Novkov, Law and Politics Book Review

"By dint of creative and exhaustive research, Mary Dudziak has written an excellent book about a facet of Thurgood Marshall's career that has never before received substantial attention. . . . All students of this great man's life owe a major debt to Professor Dudziak's labors."—Randall Kennedy, author of Sellout: The Politics of Racial Betrayal