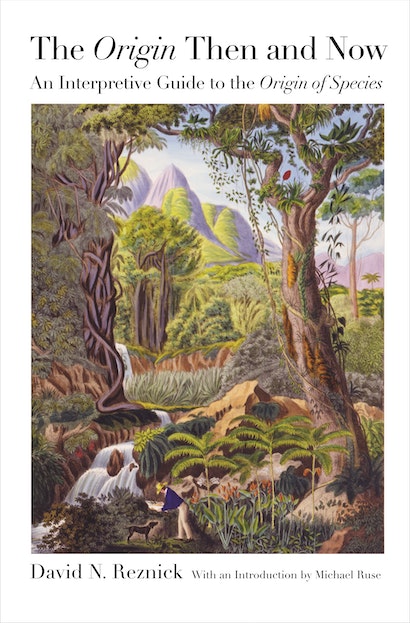 Charles Darwin’s Origin of Species is one of the most widely cited books in modern science. Yet tackling this classic can be daunting for students and general readers alike because of Darwin’s Victorian prose and the complexity and scope of his ideas. The “Origin” Then and Now is a unique guide to Darwin’s masterwork, making it accessible to a much wider audience by deconstructing and reorganizing the Origin in a way that allows for a clear explanation of its key concepts. The Origin is examined within the historical context in which it was written, and modern examples are used to reveal how this work remains a relevant and living document for today.

In this eye-opening and accessible guide, David Reznick shows how many peculiarities of the Origin can be explained by the state of science in 1859, helping readers to grasp the true scope of Darwin’s departure from the mainstream thinking of his day. He reconciles Darwin’s concept of species with our current concept, which has advanced in important ways since Darwin first wrote the Origin, and he demonstrates why Darwin’s theory unifies the biological sciences under a single conceptual framework much as Newton did for physics. Drawing liberally from the facsimile of the first edition of the Origin, Reznick enables readers to follow along as Darwin develops his ideas.

The “Origin” Then and Now is an indispensable primer for anyone seeking to understand Darwin’s Origin of Species and the ways it has shaped the modern study of evolution.

David N. Reznick is professor of biology at the University of California, Riverside.

"Reznick . . . succeeds where others have failed—instead of annotating the dense, Victorian prose of the Origin or recasting it as a popular narrative, he paraphrases each chapter of the book, adding fascinating elaborations on why Darwin chose a certain phrase, where he turned out to be wrong, and how the intervening 150 years have changed our theories. His account is a welcome tool for those who'd like to hear evolution from Darwin himself but find the master impenetrable."—SEED Magazine

"During the past decade, a number of writers have hoped to rectify this situation with books that summarize, modernize, or otherwise elucidate this seminal work of evolutionary biology. Within this growing corpus of 'guides' and 'companions,' this new book by Reznick (Univ. of California, Riverside) occupies a place somewhere between the easygoing narrative of Darwin's Ghost by Steve Jones . . . and the scholarly analysis of The Cambridge Companion to the Origin of Species, edited by Michael Ruse and Robert J. Richards. . . . Major post-Darwinian concepts are discussed as needed to explain the modem repercussions of the Origin. Overall, this is a very readable and insightful guide that will provide readers with both the understanding and the motivation to tackle the original. Summing Up: Highly recommended. All levels of academic, public, and professional libraries."—Choice

"David Reznick succeeds in producing a highly engaging and informative 'interpretive guide' to the original On the Origin of Species with an approach that will prove quite useful in different ways to different groups of readers. Those who have read Darwin but perhaps lack knowledge of contemporary evolutionary biology will find the case studies, examples, and discussion of modern context highly instructive; modern biologists will gain much insight into the state of evolutionary thinking at its genesis, à la Darwin. . . . I join Resnick in hoping that his interpretive guide will inspire readers to pick up the Origin and enjoy Darwin with a whole new level of comprehension and appreciation."—James T. Costa, BioScience

"Reznick attempts to recast Origin in a more contemporary and useful form, integrating both new ideas and new data. He accomplishes this goal in an admirable fashion. . . . The Origin Then and Now is a significant book of value to many diverse audiences. . . . We can hope that Reznick's admirable volume will convince his lay audience that not only is Darwin's theory one of the central concepts of science but that it must be included in any worthwhile science curriculum."—George E. Webb, Evolution Education & Outreach Journal

"There is clearly a need for the general public to understand what Darwin did or did not say, and Reznick's interpretive guide is a great place to begin. . . . Then and Now is an excellent book. Reznick offers insightful analysis and compelling present-day examples, and is wonderfully readable in the process."—Piers J. Hale, Reports of the National Center for Science Education

"Reznick's metatext [has] intrigue and appeal and provides value-add. Last but not least, worthwhile future research projects include in-depth explorations and comparisons of Reznick's metatext to other recent commentaries (and metatexts) by giants of the Darwin Industry."—Rasmus Grønfeldt Winther, Metascience

"For those about to read the Origin of Species for the first time, or for those about to read it yet again, David Reznick has provided a marvelous guide. He looks to the past so that readers can understand the history of Darwin's great book, but he also looks to the future, showing how, chapter by chapter, the Origin set the ground rules for modern biology."—Carl Zimmer, author of The Tangled Bank: An Introduction to Evolution and A Planet of Viruses

"This is a beautiful book—the best book I have ever read dealing with the Origin. It will move many people, experts and lay readers alike."—Lee Alan Dugatkin, author of Principles of Animal Behavior

"The "Origin" Then and Now has made the wealth of information held within Darwin's opus many times more accessible. This book is unquestionably essential reading for students and others approaching the Origin for the first time. It should be terrifically useful to anyone with an interest in understanding one of the most important books in intellectual history."—Kurt Schwenk, University of Connecticut

"David Reznick's elegantly written introduction to evolution is magnificent. It should be highly recommended reading for any course on evolution or Darwin, and I will recommend it to scientists and nonscientists alike."—Francisco J. Ayala, University of California, Irvine, author of Darwin's Gift to Science and Religion

"While most treatments of the Origin of Species set the book in the context of its time, this elegant account sets the book in the context of its science. By explaining Victorian science and showing how modern scientific discoveries illuminate Darwin's ideas, Reznick demonstrates just how revolutionary and brilliant the Origin was. Engaging, scholarly, and insightful, this is the essential companion to the Origin."—Joseph Travis, Florida State University

"Reznick masterfully highlights one of the most important, but commonly overlooked, aspects of the Origin—its scholarly approach to the theory of evolution, encompassing expertise from geology and natural history to embryology. Exceptionally well-written and comprehensive, and full of fascinating historical and cultural accounts of major biological discoveries, Reznick's book is itself a perfect illustration of the timeless qualities of scientific rigor and scholarship that were so crucial to Darwin's theory."—Alexander V. Badyaev, University of Arizona

"Reznick cogently argues that Darwin's seminal book holds more than historical interest; it is as relevant today as it was in 1859. The 'Origin' Then and Now provides an accessible way to enjoy the totality of Darwin's thesis."—Kenneth Dial, University of Montana