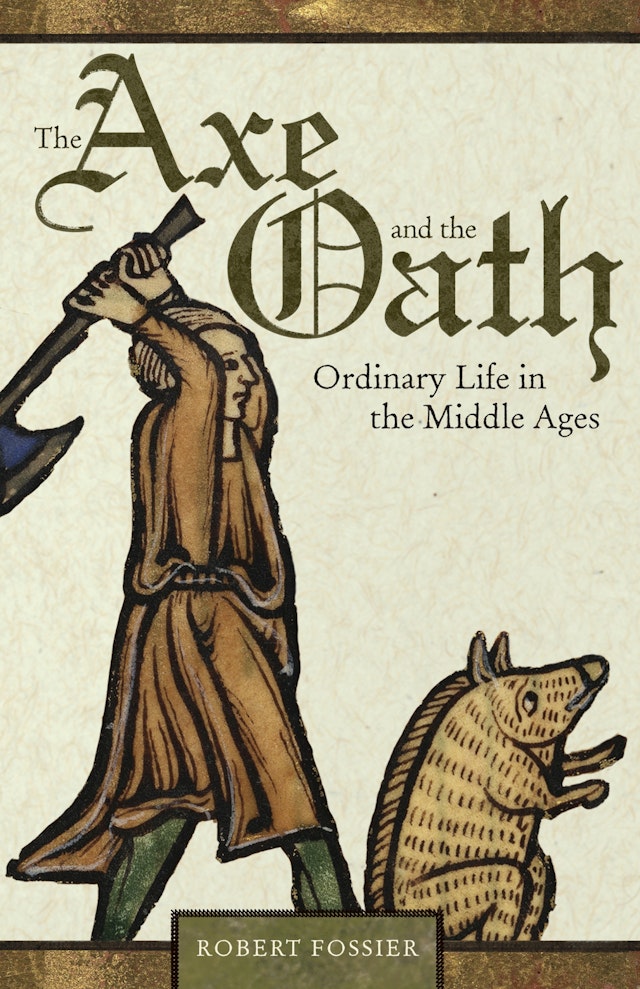 In The Axe and the Oath, one of the world’s leading medieval historians presents a compelling picture of daily life in the Middle Ages as it was experienced by ordinary people. Writing for general readers, Robert Fossier vividly describes how these vulnerable people confronted life, from birth to death, including childhood, marriage, work, sex, food, illness, religion, and the natural world. While most histories of the period focus on the ideas and actions of the few who wielded power and stress how different medieval people were from us, Fossier concentrates on the other nine-tenths of humanity in the period and concludes that “medieval man is us.?


Drawing on a broad range of evidence, Fossier describes how medieval men and women encountered, coped with, and understood the basic material facts of their lives. We learn how people related to agriculture, animals, the weather, the forest, and the sea; how they used alcohol and drugs; and how they buried their dead. But The Axe and the Oath is about much more than simply the material demands of life. We also learn how ordinary people experienced the social, cultural, intellectual, and spiritual aspects of medieval life, from memory and imagination to writing and the Church. The result is a sweeping new vision of the Middle Ages that will entertain and enlighten readers.

"This is a wonderful book—the product of a lifetime's immersion in the documents and artefacts that survive from the 1,000 years that we call the 'Middle Ages.'. . . In the end, Fossier concludes, 'I felt like saying all this, and that is enough.' More than enough, when a book as absorbing and challenging as this is the result."—Helen Castor, Times Higher Education

"This remarkable book . . . belongs with William Manchester's A World Lit Only by Fire as a window into a world so far removed from us and yet still very much present today."—Nick Schulz, National Review

"Fossier writes with a passion that makes this amazing period of European history come alive for any reader interested in medieval or social history."—Library Journal

"[A] grand-scale, breathless, dizzying tour, whisking us through a labyrinth of concepts, texts, authors and centuries in pursuit of the lives of the ordinary people who make up the world of medieval Europe."—Juanita Feros Ruys, Australian

"The subject of this skillful, elegantly produced translation of Ces gens du Moyen Age is immensely important and represents the culmination of a lifetime of work by one of the leading French medievalists of his generation. Fossier examines 'ordinary life' under a series of illuminating thematic headings: the physical being of man himself, growth from childhood to adulthood, private life, the workplace, and death. But he also considers external and psychological categories, such as the weather, trees, animals, memory, expression, faith, and salvation. In doing so, Fossier has been careful not to impose the arbitrary divisions of modern society upon a civilization that know no such compartmentalization, doing readers a great service."—Choice

"The result is a sweeping new vision of the Middle Ages that will entertain and enlighten readers."—Spartacus Educational

"The immense value of a book like this lies in its latent ability to stimulate readers—be they historians professional or amateur—to ask stimulating questions. If a reader drinks in Fossier's readable, intriguing discussion of medieval lay-learning, and learns enough from his wide-ranging discussion to ask a question either of Fossier or of the medieval sources, he has made great progress."—Emily A. Winkler, Oxonian Review

"Fossier draws upon over four decades of experience in the social history of medieval France to produce what is an immensely wide ranging, eclectic and engaging study of human life from conception to burial."—Carol Hoggart, Parergon

"What did men and women eat, drink, and wear in the Middle Ages? How did they work, fight, pray, and laugh? This book reduces medieval life to its most elemental functions. It encompasses not only material and social conditions, thought, and belief, but the natural environment as well. In other words, it raises all the questions that one never dares to ask. Among France's most active medieval scholars, Robert Fossier has spent more than six decades studying historical documents. Now he steps back from them to propose a deeply personal perspective. The result is a tour de force. Viewed in their bare flesh, humans living in the Middle Ages appear not much different from us."—John W. Baldwin, Johns Hopkins University

"This is a provocative meditation on the human condition in the Middle Ages, written by one of the field's most distinguished historians. Robert Fossier thoughtfully probes the continuities and discontinuities of everyday life for ordinary people, with constant and daring comparisons to modern knowledge and experiences."—William C. Jordan, Princeton University

"This is an outstanding book, an ambitious and strikingly successful attempt to capture the huge experience of human life in the Middle Ages. The most impressive aspect of this extraordinarily vivid work is the author's breathtaking mastery of everything he writes about. And the beautifully crafted and translucent prose gives the effect of a friendly and seamless conversation with the reader."—Piotr Górecki, University of California, Riverside